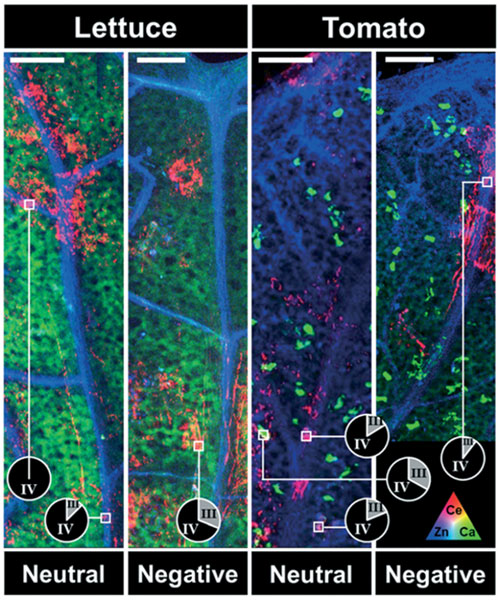 The surface charge of nanoparticles was found to significantly affect transport of nutrients into plant vascular and leaf tissue.

Tailoring the surface charge of nanoparticles may provide targeted delivery of nutrients in plants.

Scientists are trying to address our global food security challenges such as droughts, disease, and soil nutrient deficiencies by using promising plant nanobiotechnology to transfer nutrients into plants. However, the lack of cost-effective methods to deliver the nanomaterials to precise locations in plants where they are needed impedes these technological innovations. Depending on the nutrient and the plant, the nanomaterial needs to be delivered inside vascular tissues, or into plant organelles, to interact with the plants. Additionally, the root uptake and movement of engineered nanoparticles (NPs) by plants are dependent on both plant species and NP physicochemical properties.

In this study, scientists evaluated the influence of NP surface charge and differences in root structure and vasculature on cerium (Ce) distribution and spatial distribution within plants. The scientists hydroponically exposed corn and rice plants, two members of the monocotyledon family, and tomato and lettuce plants, two members of dicotyledon family, to four-nanometer-large positively-charged, negatively-charged, and neutral cerium dioxide (CeO2) NPs.

The team found that surface charge mediated CeO2 NP interactions with the roots of all the plant species. Their results showed positively charged CeO2 NPs are transported easier through the roots than the negatively charged NPs due to electrostatic attraction/repulsion to the negatively charged root surfaces, with the highest association for the tomato plant, likely due to its higher root surface area. The positive NPs remained primarily adhered to the roots untransformed, while the neutral and negative NPs were more efficiently translocated from the roots to shoots. This translocation efficiency was highest for the tomato and lettuce compared to corn and rice.

Across all plant species, the positive and neutral treatments resulted in the formation of Ce clusters outside of the main vasculature in the mesophyll, while the negative treatment resulted in Ce primarily in the main vasculature of the leaves. Comparing leaf vasculature, Ce was able to move much further outside of the main vasculature in the dicot plants than monocot plants, likely due to the larger airspace volume in dicot leaves compared to monocot leaves. Up to a 30% reduction of Ce(III) was observed for neutral and negative NP treatments likely due to a reductive dissolution of CeO2 either at the plant root surface, or intracellularly in the plant root that aids in translocation.

These results not only provide valuable insight into the influence of plant structure and NP properties on metal transport and distribution of NPs in plants, but also how surface charge can be tailored for targeted delivery of nutrients to specific plant organs.

This material is based upon work supported by the U.S. National Science Foundation (NSF) and the Environmental Protection Agency (EPA) under NSF Cooperative Agreement EF-1266252, Center for the Environmental Implications of Nano Technology (CEINT), Nano for Agriculturally Relevant Materials (NanoFARM) (CBET-1530563), and from the NSF Integrated Graduate Education and Research Traineeship Nanotechnology Environmental Effects and Policy (IGERT-NEEP) (DGE-0966227). A. S. A was supported by a DOE-Geosciences Grant (DE-FG02-92ER14244). This research used the XFM (4-BM) and SRX (5-ID) beamlines at National Synchrotron Light Source II, a U.S. Department of Energy (DOE) Office of Science User Facility operated for the DOE Office of Science by Brookhaven National Laboratory under Contract No. DE-SC0012704. Bulk XAS on root tissue was performed on Beamline 11-2 at the Stanford Synchrotron Radiation Lightsource (SSRL).