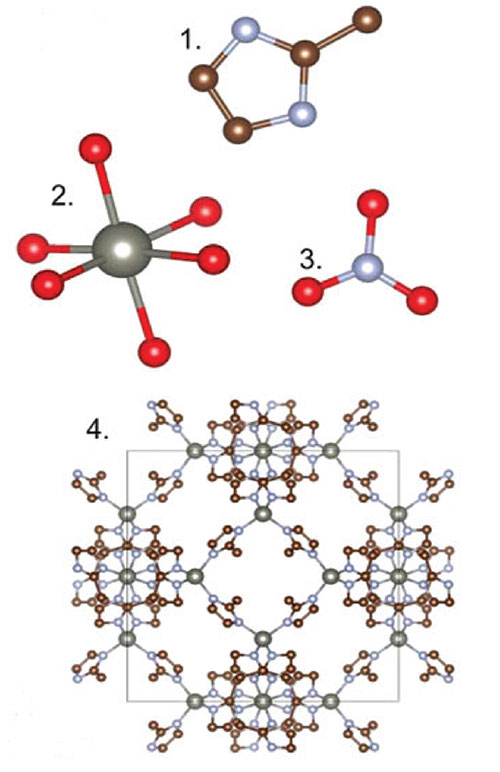 Given the wide-ranging applications in gas storage, separations, and catalysis, understanding the formation of MOFs with atomic scale precision is key for optimizing the synthesis of future MOFs.

From gas storage to catalysis, metal organic frameworks, or MOFs, have a wide range of current applications and an even broader range of potential future applications, however, to open the pathway to these new applications, scientists need to understand their formation with atomic scale precision. Knowledge about the formation process of MOFs will aid scientists during the design and synthesis of next-generation MOFs with enhanced properties and functionalities. One of the major challenges is characterizing the early-stage seeds and the pathways to framework growth, because researchers need to study these processes while they occur, or in situ, with highly sensitive methods at the nanoscale.

In this work, a team of scientists measured the in situ synthesis of a prototypical MOF, ZIF-8, using synchrotron x-ray atomic pair distribution function (PDF) analysis. To perform this sensitive analysis, the researchers worked together with the scientists from the X-ray Powder Diffraction (XPD) beamline. The XPD beamline is part of the advanced research capabilities at the National Synchrotron Light Source II (NSLS-II), a U.S. Department of Energy (DOE) Office of Science User Facility located at DOE’s Brookhaven National Laboratory. The team complimented this analysis with additional measurements using mass spectrometry and electron microscopy as well as density functional theory calculations.

The team concluded that this first study using in situ PDF showed promising results for studying the initial stages of MOF formation and therefore, opened a powerful new approach to investigating the formation of hybrid materials during synthesis.

This research used beamline 28-ID-2 of the National Synchrotron Light Source II, a U.S. Department of Energy (DOE) Office of Science User Facility operated for the DOE Office of Science by Brookhaven National Laboratory under Contract No. 25 DE-SC0012704. Work at PNNL was supported by the Office of Basic Energy Sciences, Division of Materials Sciences and Engineering, U.S. Department of Energy, under Award KC020105-FWP12152. PNNL is a multiprogram national laboratory operated for the U.S. Department of Energy by Battelle Memorial Institute under Contract DE-AC05-76RL01830. A portion of the research was performed using EMSL, a DOE Office of Science User Facility sponsored by the Office of Biological and Environmental Research. PDF measurements and analysis were supported by the NSF MRSEC program through Columbia in the Center for Precision Assembly of Superstratic and Superatomic Solids (DMR-1420634).