The following science brief, issued by the Stanford Synchrotron Radiation Lightsource (SSRL), describes research published in Nature Communications. Scientists studied myelin abundancy and axon orientations in the central and peripheral nervous system by using the recently developed method of small-angle x-ray scattering tensor tomography (SAXS-TT). The Life Science X-ray Scattering (LiX) beamline at the National Synchrotron Light Source II (NSLS-II) was part of this study, and specifically supported the studies on axon orientation in a mouse spinal cord and the brain myelin abundancy comparison between a shiverer mouse and a control. The LiX beamline belongs to a suite of beamlines dedicated to life science at NSLS-II, which is a U.S. Department of Energy Office of Science User Facilities located at Brookhaven National Laboratory. General access to the LiX beamline and all other beamlines at NSLS-II is granted through a peer-reviewed proposal system. For more information on Brookhaven role’s in this research, please contact: Cara Laasch, 631-344-8458, laasch@bnl.gov.

Quantifying Myelin and Axon Orientations in the Brain 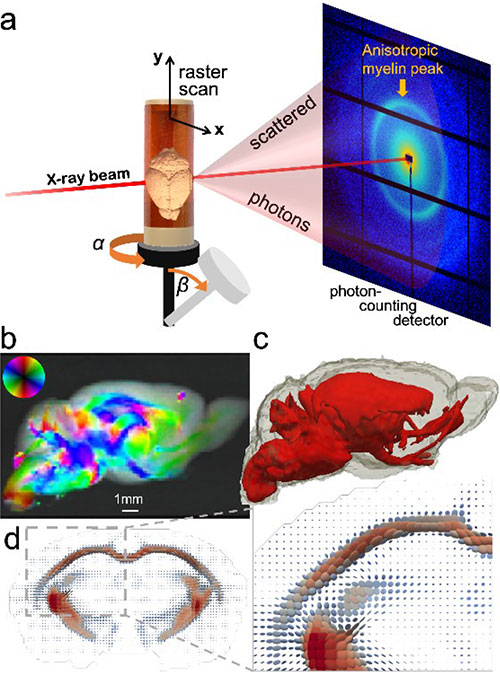 Figure 1. a) In SAXS-TT, the x-ray beam raster scans the sample under different rotations and tilts. b) One projection of the mouse brain, with the myelin peak signal intensity, and 2D fiber orientation color-encoded. c-d) Tensor tomographic reconstruction of the myelin-specific signal results in a tensor representing the myelinated axon orientation distribution per voxel (d) and quantitative 3D myelin maps (c).

Myelin is an indispensable component of our brain, “insulating” neurons and enabling fast signal transduction. The level of myelination and the organization of myelinated axons are important determinants of brain development and are affected in virtually all neurological diseases. However, current myelin imaging methods in clinics or research are either non-specific (e.g. MRI) or destructive (e.g. histology). Small-angle x-ray scattering (SAXS), in contradistinction, combines the high tissue penetration of x-rays with specificity to periodic tissue nanostructures.

The ability of the method to provide accurate myelin level readouts was assessed using myelin histology as gold standard. In all cases the SAXS-TT derived myelin levels were very highly correlated with histology results; moreover, when compared to myelin-sensitive MRI contrasts, histology and SAXS-TT gave the same output, suggesting SAXS-TT’s potential as reference myelin imaging method, with the additional benefits of no extra sample preparation, its nano-structural specificity and its non-destructive nature.

Similar results were obtained for the axonal orientation maps, which correlated highly with both MRI measures and 3D histology. Since MRI metrics are not specific to myelinated axons, and histology is destructive and non-quantitative, this study suggests that SAXS-TT has the potential to become the reference method for assessing myelinated axon orientations, responsible for long-range connectivity.

The excellent sensitivity and accuracy of the method was further showcased in a variety of mouse and human samples of different sizes. In a sample of mouse spinal cord, it was shown that neural tracts derived with SAXS-TT reflect the neural tracts more accurately than the ones derived from diffusion MRI, which is the current method of choice for the 3-dimensional mapping of neural tracts.

The sensitivity of the SAXS-TT method to small differences in periodicity of the myelin structure also enables it to distinguish between the central and peripheral nervous system (CNS/PNS) myelin. This allows for multiplexed imaging, where CNS and PNS myelin signals could be analyzed separately enabling the first 3-dimensional rendering of their transition areas between the central and peripheral nervous system, revealing a ball-socket fit.

It was further demonstrated that the method can be applied to study neurologic diseases by examining normal and dysmyelinated mouse brains, showing very different myelin levels as well as altered myelin periodicity in the diseased brain, emphasizing the potential of the SAXS-TT based myelin mapping as a future diagnostic tool.

SAXS-TT experiments for this study were performed at the BioSAXS BL4-2 at the Stanford Synchrotron Radiation Lightsource (SSRL), the cSAXS beamline of the Swiss Light Source (SLS) as well as the LiX beamline at the National Synchrotron Light Source II (NSLS-II).

In summary, this novel non-destructive, stain-free imaging approach enables quantitative studies of myelination within and across nervous tissue samples during development, aging, disease and treatment. It provides highly accurate maps of myelin distribution and axon orientation in macroscopically sized samples. It should be noted that the general method is also applicable to other ordered biomolecular nanostructures and such extensions are currently being investigated.