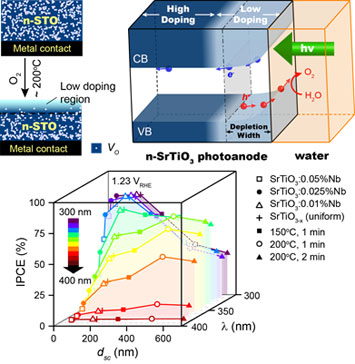 In semiconductor-based photoelectrochemical (PEC) water splitting, charge carrier separation and delivery largely rely on the depletion region formed at the semiconductor-water interface. In a Schottky junction device, the trade-off between photon collection and minority charge carrier delivery remains a persistent obstacle for maximizing the performance of a water-splitting photoelectrode.

This investigation demonstrated that the PEC water-splitting efficiency for an n-SrTiO3 (n-STO) photoanode improves very significantly—despite the photoanode’s weak, indirect band gap optical absorption (a < 104 cm-1)—by widening the depletion region through engineering the region’s doping density and profile. A simple low-temperature reoxidation technique was used to fabricate graded, doped n-STO photoanodes, with their bulk heavily doped with oxygen vacancies and their surface lightly doped over a tunable depth of a few 100 nm. The graded doping profile widened the depletion region to more than 500 nm, leading to a very efficient charge carrier separation and high quantum efficiency (> 70%) for the weak indirect transition. This simultaneous optimization of light absorption, minority carrier (hole) delivery, and majority carrier (electron) transport through a graded doping architecture may inform the design of other indirect band gap photocatalysts that suffer from similar problems with weak optical absorption.

This research pushes the depletion width of a water-splitting photoelectrode to an unprecedented limit (> 500 nm). The depletion width in previous studies barely exceeds 100 nm for metal oxides.  In addition to offering a new path for optimizing visible light photocatalysts that have indirect band gaps (e.g., WO3, Fe2O3), this approach fostered a more comprehensive understanding of the carrier-relaxation process in the depletion region. For example, the effect of point defects can be considered at densities that are traditionally considered negligible.