Low marine boundary layer clouds over the ocean exert a large influence on Earth’s climate through reflection of sunlight and mediating interactions between air and sea. These clouds are a challenge to global climate models, which have difficulty in accurately representing them and the transitions among their different types. MAGIC (the Marine ARM GPCI Investigation of Clouds, where GPCI is a project comparing data from the major climate models) will study these clouds by deploying the Second ARM (Atmospheric Radiation Measurement Climate Research Facility of the U.S. Department of Energy) Mobile Facility (AMF2) on the Horizon Lines container ship Spirit making regular transects between Los Angeles and Hawaii from October, 2012 to September, 2013.

AMF2 consists of three 20-foot modified “SeaTainers” and other smaller modules and includes radars and other instruments to measure properties of clouds and precipitation, aerosols, and radiation (which in the present context refers to infrared, visible, and ultraviolet light, and not in any way to radioactivity), along with meteorological and oceanographic conditions. AMF2 instruments will be operated continuously and will be accompanied by two technicians.

The Spirit, which is 272 meters long and 30 meters wide, makes the 4100 km round trip from Los Angeles to Honolulu every two weeks. Horizon Lines, the largest container shipping company operating under the Jones Act, accounts for 37% of the total U.S. marine container shipments from the continental U.S. to Alaska, Puerto Rico, and Hawaii.

The primary objective of MAGIC is to improve the representation of the stratocumulus-to-cumulus transition, an ever-present phenomenon along this particular transect, in climate models. Several modeling groups are interested in the data that will result from MAGIC. GPCI, the GCSS Pacific Cross-section Intercomparison (GCSS: GEWEX Cloud Systems Study; GEWEX: Global Energy and Water Cycle Experiment, a core project of the World Climate Research Programme) has long used a transect near the route taken by the Spirit. EUCLIPSE, the European Union Cloud Intercomparison, Process Study & Evaluation Project, a collaborative effort of 12 institutes in Europe, also uses the GPCI transect. CGILS, the CFMIP - GCSS Intercomparison of Large Eddy Models and Single Column Models, a joint project of the GCSS and the World Climate Research Programme Working Group on Coupled Modelling Cloud Feedback Model Intercomparison Project (CFMIP), compares results at specific locations along the GPCI transect.

We would like to thank the crew of the Spirit and Horizon Lines for their support and encouragement of this endeavor! 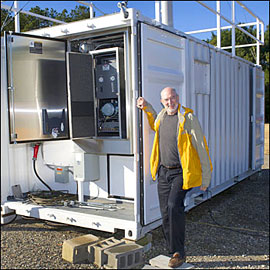 MAGIC in the news