SAN DIEGO, CA - Scientists at the U.S. Department of Energy's Brookhaven National Laboratory have recreated the high-pressure, low-temperature conditions of the seafloor in a tabletop apparatus for the study of methane-hydrates, an abundant but currently out-of-reach source of natural gas trapped within sediments below the ocean floor. Michael Eaton, a Stony Brook University graduate student working for Brookhaven chemist Devinder Mahajan, will present a talk outlining the use of the apparatus for the creation and study of methane hydrates during a special two-day symposium co-organized by Mahajan at the 229th National Meeting of the American Chemical Society in San Diego, California. The talk is scheduled for Sunday, March 13, at 3:05 p.m. in room Madeleine C-D of the Hyatt Regency. 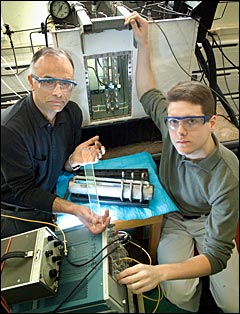 "The amount of natural gas that is tied up in methane hydrates beneath the seafloor and in permafrost on Earth is several orders of magnitude higher than all other known conventional sources of natural gas - enough to meet our energy needs for several decades," Mahajan says. But extracting this resource poses several challenges.

For one thing, methane hydrates — which are ice-like cages made of water molecules surrounding individual methane molecules — are only stable at the very low temperatures and high pressures present at the ocean floor. "If you try to bring it up, these things fizzle and decompose, releasing the trapped methane," Mahajan says.

So a multi-agency team led by the Department of Energy — as part of its mission to secure America's future energy needs — is trying to learn about the conditions necessary for keeping hydrates locked up so they can be extracted safely and tapped for fuel.

Mahajan's group has built a vessel that mimics the seafloor temperature and pressure conditions, where they can study the kinetics of methane hydrate formation and decomposition. Unlike other high-pressure research vessels, the Brookhaven apparatus allows scientists to interchange vessels of different volumes, study even fine sediments, and visualize and record the entire hydrate-forming event through a 12-inch window along the vessel. In addition, mass-balance instrumentation allows the Brookhaven group to collect reproducible data in the bench-top unit. Even better, Mahajan says, they can study the kinetics in actual samples of sediment that once contained hydrates — as close to the natural conditions as you can get in a lab.

"You fill the vessel with water and sediment, put in methane gas, and cool it down under high pressure. After a few hours, the hydrates form. You can actually see it. They look like ice, but they are not. They are stable at 4 degrees Celsius," he explains.

One further advantage of doing this work at Brookhaven Lab is that the scientists can use the National Synchrotron Light Source — a source of intense x-rays, ultraviolet, and infrared light — to measure physical characteristics of the sediments under study. Using x-ray computed microtomography, the scientists gain information about the porosity and other physical characteristics that may affect the availability of nucleation sites where hydrates can form.

Such data about hydrate formation in natural host sediment samples are scarce. By studying different samples and learning what combinations of pressure and temperature keep the methane locked up, the scientists hope to identify ways to compensate for the changes the hydrates experience as they are brought to the ocean's surface so they can be extracted with a minimum loss. The comparisons of different sediment samples might also help pinpoint the most abundant sources of locked-up methane.

"It may be at least a decade before we can even think about mining these deposits, but answering these fundamental questions is certainly the place to start," says Mahajan, who holds a joint appointment as a Stony Brook University professor. "This is a very important issue tied to our future national energy security."

This research was initially funded by Brookhaven's Laboratory Directed Research and Development program and is now funded by the Department of Energy's Office of Fossil Energy. The symposium on Gas Hydrates and Clathrates is being co-sponsored by the Petroleum and Fuel Divisions of the American Chemical Society.