Another step toward applications in solar energy, sensors, and nanoscale circuits

UPTON, NY — Scientists at the U.S. Department of Energy’s (DOE) Brookhaven National Laboratory report the first successful assembly of 3-D multi-component nanoscale structures with tunable optical properties that incorporate light-absorbing and -emitting particles. This work, using synthetic DNA as a programmable component to link the nanoparticles, demonstrates the versatility of DNA-based nanotechnology for the fabrication of functional classes of materials, particularly optical ones, with possible applications in solar-energy conversion devices, sensors, and nanoscale circuits. The research was published online September 29, 2010, in the journal NanoLetters.

BNL scientists used DNA linkers with three binding sites (black “strings”) to connect gold nanoparticles (orange and red spheres) and fluorescent dye molecules (blue spheres) tagged with complementary DNA sequences. These units are self-assembled to form a body-center cubic lattice with nanoparticles at the corners and in the center, and fluorescent dye molecules in between.

“For the first time we have demonstrated a strategy for the assembly of 3-D, well-defined, optically active structures using DNA encoded components of different types,” said lead author Oleg Gang of Brookhaven’s Center for Functional Nanomaterials (CFN). Like earlier work by Gang and his colleagues, this technique makes use of the high specificity of binding between complementary strands of DNA to link particles together in a precise way.

In the current study, the DNA linker molecules had three binding sites. The two ends of the strands were designed to bind to complementary strands on “plasmonic” gold nanoparticles — particles in which a particular wavelength of light induces a collective oscillation of the conductive electrons, leading to strong absorption of light at that wavelength. The internal part of each DNA linker was coded to recognize a complementary strand chemically bound to a fluorescent dye molecule. This setup resulted in the self-assembly of 3-D body centered cubic crystalline structures with gold nanoparticles located at each corner of the cube and in the center, with dye molecules at defined positions in between. 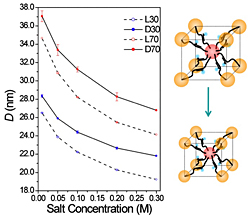 The resulting 3-D structures could be tuned by adjusting the salt concentration. As salt concentration increased, the crystals contracted by about 30 percent, decreasing the distance (D) between the particles. This contraction in interparticle distance had a dramatic effect on the fluorescence of the dye molecules, making them cycle photons faster, as indicated by the color scale at the left of the crystal images (see image below), which ranges from nearly 2 nanoseconds per cycle for the free dye (A), to about 0.7 nanoseconds per cycle in larger lattices (C), to just above 0.3 nanoseconds per cycle for the contracted crystals (E).

The scientists also demonstrated that the assembled structures can be dynamically tuned by altering the salt concentration of the solution in which they are formed. Changes in salinity alter the length of the negatively charged DNA molecules, leading to reversible contraction and expansion of the whole lattice by about 30 percent in length.

“It has long been understood that the distance between metal nanoparticles and paired dye molecules can affect the optical properties of the latter,” said Matthew Sfeir, coauthor and an optical scientist at the CFN. In this experiment, the expansion and contraction of the crystal lattice triggered by the changes in salt concentration allowed for a dramatic modulation of an optical response: a three-fold increase in the emission rate of the fluorescent molecules was observed.

These results were determined using a combination of small angle x-ray scattering at Brookhaven’s National Synchrotron Light Source (NSLS) and time-resolved fluorescent methods at the CFN. “This combination of synchrotron-based structural methods and time-resolved optical imaging techniques provided invaluable direct insight into the relationship between the structure and fluorescent properties of these light emitting arrays,” Gang said. 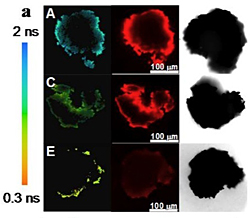 “Our study tackles important questions about the self-assembly of systems from components of multiple types. Such systems potentially allow for the modulation of properties of individual components, and might lead to the emergence of new behavior due to collective effects. This assembly approach can be applied to explore such collective behavior of three-dimensional nano-optical arrays — for example, the influence of the plasmonic lattice on quantum dots.

“An understanding of these interactions would be relevant for developing novel optical materials for photovoltaic, photocatalysis, computing, and light-emitting applications. We now have an approach to make these structures and further study these effects.”

This research was funded by the DOE Office of Science. In addition to Gang and Sfeir, Huiming Xiong of the CFN and Shanghai Jiao Tong University was a coauthor on this work.

The Center for Functional Nanomaterials at BNL is one of the five DOE Nanoscale Science Research Centers, premier national user facilities for interdisciplinary research at the nanoscale that are supported by the DOE Office of Science. Together the NSRCs comprise a suite of complementary facilities that provide researchers with state-of-the-art capabilities to fabricate, process, characterize and model nanoscale materials, and constitute the largest infrastructure investment of the National Nanotechnology Initiative. The NSRCs are located at DOE’s Argonne, Brookhaven, Lawrence Berkeley, Oak Ridge and Sandia and Los Alamos national laboratories.