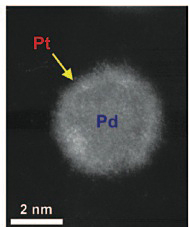 UPTON, NY — Stop-and-go driving can wear on your nerves, but it really does a number on the precious platinum that drives reactions in automotive fuel cells. Before large fleets of fuel-cell-powered vehicles can hit the road, scientists will have to find a way to protect the platinum, the most expensive component of fuel-cell technology, and to reduce the amount needed to make catalytically active electrodes.

Now, scientists at the U.S. Department of Energy’s (DOE) Brookhaven National Laboratory have developed a new electrocatalyst that uses a single layer of platinum and minimizes its wear and tear while maintaining high levels of reactivity during tests that mimic stop-and-go driving. The research — described online in Angewandte Chemie, International Edition, and identified by the journal as a “very important paper” — may greatly enhance the practicality of fuel-cell vehicles and may also be applicable for improving the performance of other metallic catalysts.

The newly designed catalysts are composed of a single layer of platinum over a palladium (or palladium-gold alloy) nanoparticle core. Their structural characterization was performed at Brookhaven’s Center for Functional Nanomaterials and the National Synchrotron Light Source. 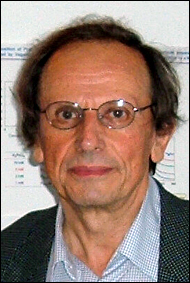 “Our studies of the structure and activity of this catalyst — and comparisons with platinum-carbon catalysts currently in use — illustrate that the palladium core ‘protects’ the fine layer of platinum surrounding the particles, enabling it to maintain reactivity for a much longer period of time,” explained Brookhaven Lab chemist Radoslav Adzic, who leads the research team.

In conventional fuel-cell catalysts, the oxidation and reduction cycling — triggered by changes in voltage that occur during stop-and-go driving — damages the platinum. Over time, the platinum dissolves, causing irreversible damage to the fuel cell.

In the new catalyst, palladium from the core is more reactive than platinum in these oxidation and reduction reactions. Stability tests simulating fuel cell voltage cycling revealed that, after 100,000 potential cycles, a significant amount of palladium had been oxidized, dissolved, and migrated away from the cathode. In the membrane between the cathode and anode, the dissolved palladium ions were reduced by hydrogen diffusing from the anode to form a “band,” or dots.

Reactivity of the platinum monolayer/palladium core catalyst also remained extremely high. It was reduced by merely 37 percent after 100,000 cycles.

Building on earlier work that illustrated how small amounts of gold can enhance catalytic activity, the scientists also developed a form of the platinum monolayer catalyst with a palladium-gold alloy core. The addition of gold further increased the stability of the electrocatalyst, which retained nearly 70 percent of reactivity after 200,000 cycles of testing.

“This indicates the excellent durability of this electrocatalyst, especially when compared with simpler platinum-carbon catalysts, which lose nearly 70 percent of their reactivity after much shorter cycling times. This level of activity and stability indicates that this is a practical catalyst. It exceeds the goal set by DOE for 2010-2015 and it can be used for automotive applications,” Adzic said.

“In addition to developing electrocatalysts for automotive fuel cell applications, these findings indicate the broad applicability of platinum monolayer catalysts and the possibility of extending this concept to catalysts based on other noble metals,” Adzic said.

The fundamental science leading to the development of the new electrocatalyst and early scale-up work was funded by the DOE Office of Science. Additional funding came from the Toyota Motor Corporation.

The Center for Functional Nanomaterials at Brookhaven National Laboratory is one of the five DOE Nanoscale Science Research Centers (NSRCs), premier national user facilities for interdisciplinary research at the nanoscale. Together the NSRCs comprise a suite of complementary facilities that provide researchers with state-of-the-art capabilities to fabricate, process, characterize and model nanoscale materials, and constitute the largest infrastructure investment of the National Nanotechnology Initiative. The NSRCs are located at DOE’s Argonne, Brookhaven, Lawrence Berkeley, Oak Ridge and Sandia and Los Alamos national laboratories.