The following news release is being issued today by the U.S. Department of Energy’s Atmospheric Radiation Measurement (ARM) Climate Research Facility. It describes a new phase of a research program taking place in Steamboat Springs, Colorado, to gather data that will improve modeling of Earth’s climate system. Scientists from DOE’s Brookhaven National Laboratory designed and installed the suite of instruments located near Christie Peak, and will continue to play various roles both on location in Colorado and remotely as data are collected and analyzed. For more information about Brookhaven’s role in this research or to interview some of the scientists involved, contact: Karen McNulty Walsh, 631 344-8350, kmcnulty@bnl.gov.

Steamboat Springs, Colorado — Ski season is snow season, and snow season means clouds — exactly what a team of atmospheric scientists in “Ski Town USA” are anticipating. For the next five months, a dense collection of remote-sensing instruments will gather data from the clouds at four different elevations on Mount Werner in the Steamboat Springs ski area. Scientists will use these data to study how clouds — especially those that produce rain and snow — evolve in mountainous terrain. They will use the data to verify the accuracy of measurements used in computer models of the Earth’s climate system. 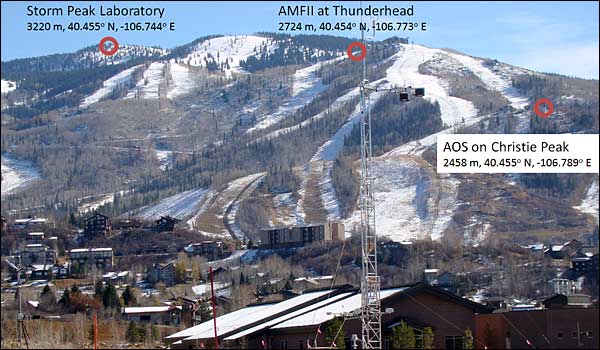 The research sites at different elevations on Mount Werner in the Steamboat Springs ski area, Colorado.

Sponsored by the U.S. Department of Energy’s Atmospheric Radiation Measurement (ARM) Climate Research Facility, the goal behind the multiple elevation instrument strategy is to capture a “vertical profile” of the clouds that move across the mountain slopes. To do this, the department is deploying a new ARM Mobile Facility with nearly two dozen remote-sensing instruments to take continuous measurements from three different elevations beneath Storm Peak Lab, a permanent atmospheric research lab at the top of Mount Werner.

“Data sets like these are usually only possible through episodic and expensive aircraft operations over the course of several years,” said Jay Mace, a professor of atmospheric science at the University of Utah and the lead scientist for the Storm Peak Laboratory Cloud Property Validation Experiment, or STORMVEX. “This data set will be crucial for validating ground-based measurements of liquid, mixed-phase, and precipitating clouds systems.”

Because clouds are so dynamic and can contain ice, water, or a mixture of the two, they continue to be one of the hardest components of the climate system for scientists to model accurately. Ground based instruments provide more geographic and temporal coverage of these cloud systems. Instruments on the ground are typically used to obtain — or “retrieve” — measurements that are related indirectly to important cloud processes. Inferring these cloud processes requires development of mathematical formulas, or algorithms, to convert the measurements into cloud properties. In order to ensure greater accuracy of the ground-based measurements, comparisons (validations) are made with more direct airborne measurements. Storm Peak Lab during the experiment will be in-cloud and their array of measurements will be a proxy for aircraft measurements.

“With the modular design of ARM’s second mobile facility, and Storm Peak Lab as the anchor, we can collect the validation data scientists need in a fraction of the time and cost,” said Brad Orr, a scientist at DOE’s Argonne National Laboratory and the manager of the second ARM mobile facility.

In addition, the National Science Foundation-supported Colorado Airborne Multiphase Cloud Study (CAMPS), led by Dr. Linnea Avalone of the University of Colorado, will provide nearly 100 hours of research flight time over the Steamboat area by the University of Wyoming King Air research aircraft. Instruments and support from the Jet Propulsion Lab are also critical elements of STORMVEX.

All the instruments will operate continuously throughout the field campaign, including several funded by the American Recovery and Reinvestment Act that have never been deployed before. The campaign also represents the inaugural deployment of ARM’s second mobile facility. The first ARM mobile facility is currently gathering data in the Azores.

“The experiment will provide data on cloud and aerosol processes in a mountainous region,” said Wanda Ferrell, DOE program manager for the ARM Climate Research Facility. “The full power of the campaign is that it provides measurements at four vertical levels, and these data will be critical for answering high priority science questions central to climate model improvements.”