UPTON, NY — The U.S. Department of Energy’s (DOE) Brookhaven National Laboratory has won three of 10 prizes given for the first time by Battelle for scientific advances and technology innovations. Battelle, the world’s largest nonprofit independent research and development organization, along with Stony Brook University, comprise Brookhaven Science Associates, the company that manages Brookhaven Lab for DOE. Each of the award-winning teams will receive a $5,000 education grant provided to a school of their choice. 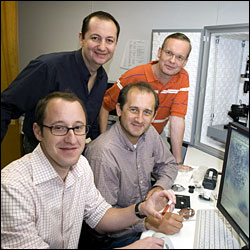 The winners were chosen from 19 entries submitted by laboratories for which Battelle plays a significant management role. Brookhaven won two awards in the category of scientific discovery, which includes scientific advances published within the last three years that have significantly advanced human knowledge in any field of the physical, life, or social sciences. Also, a winning entry from Brookhaven was chosen in the category of technology impact, which includes technology innovations that are on track, or have high promise, to provide substantial social and/or economic impact.

The winning scientific discoveries included a new way to use a synthetic form of DNA to control the assembly of nanoparticles; groundbreaking investigations that revealed new data about the nature of matter as it existed just microseconds after the Big Bang; and, in the area of technology impact, Brookhaven won for the invention of ProxiScan™, a gamma camera that can detect prostate cancer at a very early stage. 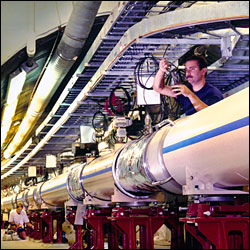 Brookhaven Lab scientists Oleg Gang and Dmytro Nykypanchuk, with former Brookhaven researchers Daniel van der Lelie and Mathew Maye, performed forefront research at the Laboratory’s Center for Functional Nanomaterials that allowed them to create three-dimensional and small-cluster structures from nanoparticles using synthetic DNA. These types of structures might be useful, for example, in solar cells, as biosensors, and as new materials for data storage. The research demonstrated for the first time the programmable self-assembly of dissimilar nanometer-scale building blocks into three-dimensional ordered structures, and provided insight into the requirements for DNA design.

About 1,000 physicists from around the world conduct research at Brookhaven’s world-class accelerator, the Relativistic Heavy Ion Collider (RHIC), which has culminated in a better understanding of the matter that made up the universe during its first few microseconds. The researchers discovered details about the properties of this matter, dubbed the “perfect” liquid, because it flows with almost no frictional resistance or viscosity. Before the RHIC experiments were completed and analyzed, physicists thought the first matter in the universe would be more like a gas. Recent and ongoing findings about this matter can illuminate the evolution and current behavior of the universe. 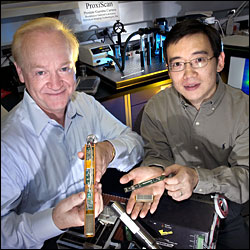 In a creative leap of the imagination coupled with expert technical knowledge, Brookhaven Lab researchers, led by Ralph James and Yonggang Cui, applied a new class of small semiconductor-based radiation detectors they had developed for national security purposes to the localization of cancerous tumors. Their innovation, licensed to Hybridyne Imaging Technologies, Inc., and marketed as ProxiScan™, is a compact cadmium zinc telluride gamma camera designed for high-resolution imaging of prostate cancer. It is a technology that can lead to more accurate and timely diagnosis and significantly improve treatment strategies.

The schools that will receive grants are: Paul J. Gelinas Junior High School in Setauket, a local Long Island school chosen by Oleg Gang on behalf of the DNA self-assembly team; Smithtown High School East, chosen by Brookhaven Lab’s Physics Department Chair Thomas Ludlam on behalf of those who performed research at RHIC; and Fisk University, a historically African-American university located in Nashville, Tennessee, chosen by Ralph James and Yonggang Cui, on behalf of the ProxiScan™ team.