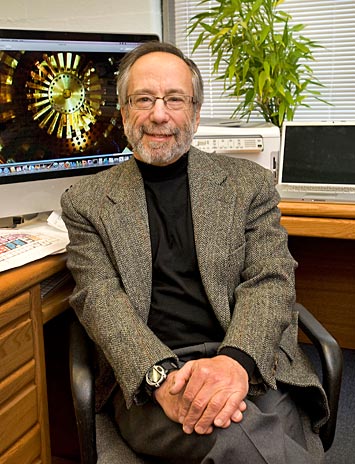 UPTON, NY — Laurence Littenberg has been named chair of the Physics Department at the U.S. Department of Energy's Brookhaven National Laboratory, effective July 1, 2013. He will be succeeding Thomas Ludlam, who is stepping down after having served as chair since September 2007. Ludlam, who has overseen the department during a time of intense discovery and growth, will assist with the transition to ensure continued smooth operation of some of Brookhaven's premiere research programs.

Brookhaven's Physics Department has a staff of 275 and an annual budget of about $100 million for nuclear and particle physics, funded primarily by the DOE Office of Science. The department's research focuses on investigating the properties and interactions of subatomic particles and unraveling the secrets of the universe, from the origin of mass to the astonishing properties of the quark-gluon plasma and the mysteries of dark matter and dark energy.

"I am deeply honored to have the opportunity to take on this role.  I will do my utmost to maintain the record of distinguished achievement of the department," Littenberg said.

From its inception, Brookhaven Lab has had a world-renowned physics program. Scientists working on fundamental physics problems at Brookhaven have earned five Nobel Prizes and made numerous important discoveries, some with applications across scientific disciplines, including advances in methods for diagnosing and treating diseases such as cancer, and new energy technologies.

Littenberg, who joined the Brookhaven physics staff in 1974, has been recognized for his role in groundbreaking research at the frontiers of particle physics. At an experiment called E787 at Brookhaven's proton accelerator, the Alternating Gradient Synchrotron (AGS), Littenberg and an international team of 50 physicists discovered and measured the rate of a very rare type of particle decay in which a positively charged subatomic particle called a K meson decays to a pi meson and a neutrino-antineutrino pair. The probability of this type of decay occurring had been calculated at about one in ten billion, leading many to refer to its discovery as akin to finding "a needle in a micro-cosmic haystack." The discovery offered new insight into the Standard Model of particle physics, the reigning theory physicists use to describe and explore the universe's most elemental forces and the basic building blocks of matter.

"The rare K-decay discovery is the type of precision research Brookhaven physicists are known for, from the design and use of sophisticated particle accelerators to the most detailed and complex detectors imaginable, and the analysis of vast quantities of data in search of the extraordinary," Littenberg said.

As Chair, Littenberg will oversee Brookhaven's current portfolio of complex physics experiments, including the exploration of forces and particles of the early universe that give shape to visible matter in the universe today — taking place at the Lab's Relativistic Heavy Ion Collider (RHIC), the only particle collider now operating in the U.S. — as well as Brookhaven's role in collaborative research at the Large Hadron Collider (LHC) — the world's most powerful particle accelerator, located at the European Center for Nuclear Research (CERN) — which explores the characteristics of fundamental subatomic particles and conducts research that is in many ways complementary with that done at RHIC. Brookhaven physicists have and continued to play a central role in building and operating the ATLAS experiment, one of the large high-energy particle detectors at the LHC, and they also run the central facility for analyzing and distributing the massive volumes of data generated at ATLAS to collaborators around the U.S. This work was and will be essential to the recent discovery and continuing study of a new subatomic "Higgs" particle that may help explain how all fundamental particles get their mass.

Littenberg will also take charge of the Lab's efforts to understand physics at the cosmic scale, including the development of a multi-gigapixel camera sensor for the Large Synoptic Survey Telescope (LSST), a huge instrument to be deployed in Chile to determine the dark matter distribution in the universe and explore the nature of dark energy; Brookhaven's collaboration in the Baryon Oscillation Spectroscopic Survey (BOSS), which is creating a 3-D map of the universe by measuring light given off from extremely distant galaxies and quasars; and experiments in the U.S. and China to further explore the properties of neutrinos, elusive subatomic particles with historical significance for Brookhaven as the subject of research dating back to the 1950s and 70s that eventually earned the 2002 Nobel Prize in Physics. The latter includes the proposed Long Baseline Neutrino Experiment (LBNE), which is the centerpiece of the future U.S. domestic high-energy physics program.

"Many of these programs have come to fruition and grown under the careful and strategic leadership of Tom Ludlam, whose personal contributions, particularly toward the construction and operation of RHIC, were enormous," Littenberg said. "I plan to expand on his efforts to attract the world's leading physicists to Brookhaven, to leverage the opportunities inherent in managing such an intellectually diverse array of experiments, and meet the scientific challenges of the 21st Century so we can continue to explore the questions that ignite human curiosity and stimulate technological development as we pursue new knowledge," Littenberg said.

Littenberg earned a bachelor's degree in physics from Cornell University in 1963, and both a master's degree and Ph.D. in high-energy physics from the University of California, San Diego (UCSD), in 1965 and 1969, respectively. He was a research associate at UCSD before joining Daresbury Laboratory in Cheshire, England, in 1970 as a senior research associate. He came to Brookhaven Lab in 1974 as an associate physicist. Earning tenure in 1983 and named a senior physicist in 1989, he led the Electronic Detector Group for 18 years and became associate chair for high-energy physics in Brookhaven's Physics Department in 2007. Littenberg won the Brookhaven Science & Technology Award in 2000. A Fellow of the American Physical Society, he received the society's W.K.H. Panofsky Prize in 2010, along with Douglas Bryman of the University of British Columbia and A.J. Stewart Smith of Princeton University, for the rare K decay discovery. In 2011 he was again recognized for the rare K-decay research when named a Fellow of the American Association for the Advancement of Science.