Brookhaven Lab scientists (from left) Ivan Bozovic, Yujie Sun, Mark Dean, and John Hill stand in front of an x-ray diffractometer used to check the structural quality of the custom-grown materials, confirming that they were near-perfect crystals with atomically smooth surfaces before being taken to the European Synchrotron Radiation Facility.

UPTON, NY—Intrinsic inefficiencies plague current systems for the generation and delivery of electricity, with significant energy lost in transit.  High-temperature superconductors (HTS)—uniquely capable of transmitting electricity with zero loss when chilled to subzero temperatures—could revolutionize the planet's aging and imperfect energy infrastructure, but the remarkable materials remain fundamentally puzzling to physicists. To unlock the true potential of HTS technology, scientists must navigate a quantum-scale labyrinth and pin down the phenomenon's source.

Now, scientists at the U.S. Department of Energy's (DOE) Brookhaven National Laboratory and other collaborating institutions have discovered a surprising twist in the magnetic properties of HTS, challenging some of the leading theories. In a new study, published online in the journal Nature Materials on August 4, 2013, scientists found that unexpected magnetic excitations—quantum waves believed by many to regulate HTS—exist in both non-superconducting and superconducting materials.

"This is a major experimental clue about which magnetic excitations are important for high-temperature superconductivity," said Mark Dean, a physicist at Brookhaven Lab and lead author on the new paper. "Cutting-edge x-ray scattering techniques allowed us to see excitations in samples previously thought to be essentially non-magnetic."

"Discovering excitations that do not depend on doping levels means that the relationship between high-temperature superconductivity and the waves in these films is more intricate than we suspected."

On the atomic scale, electron spins—a bit like tiny bar magnets pointed in specific directions—rapidly interact with each other throughout magnetic materials. When one spin rotates, this disturbance can propagate through the material as a wave, tipping and aligning the spins of neighboring electrons. Many researchers believe that this subtle excitation wave may bind electrons together to create the perfect current conveyance of HTS, which operates at slightly warmer temperatures than traditional superconductivity.

"Proving or disproving this hypothesis remains one of the holy grails of condensed matter physics research," Dean said. "This discovery gives us a new way to evaluate rival theories of HTS."

Superconductivity demands extremely cold conditions and a precise chemical recipe. Beyond selecting the right elements from the periodic table, physicists carefully tweak the electron content of atoms through a process called doping. Doping determines the average number of electrons present in each atom, and in turn dictates both the behavior of spin waves and the presence of HTS, which emerges around a particular doping sweet spot.

For this study, the team examined thin films of lanthanum, strontium, copper, and oxygen—often abbreviated as LSCO. These particular HTS materials can be tuned to exhibit a wide range of different electronic behaviors.

"This is the only system that lets us examine the entire phase diagram, from a strongly correlated insulator all the way to a non-superconducting metal," said Brookhaven physicist John Hill, coauthor on the paper. "We could measure magnetic excitations both before and after the ideal doping levels for superconductivity."

To grow these materials, Brookhaven Lab physicist Ivan Bozovic—another author on the study—used a custom-built atomic layer-by-layer molecular beam epitaxy machine (ALL-MBE). Bozovic's system is uniquely equipped to monitor the synthesis of the LSCO films in real-time, giving him an unparalleled degree of control over the atomic composition of each layer, including adjustments to the doping levels.

"Ivan grows these beautiful, fantastic films," Hill said. "His samples are highly uniform with flat, mirror-like surfaces. This helps enormously when trying to pin down the subtleties of how these samples scatter x-rays." 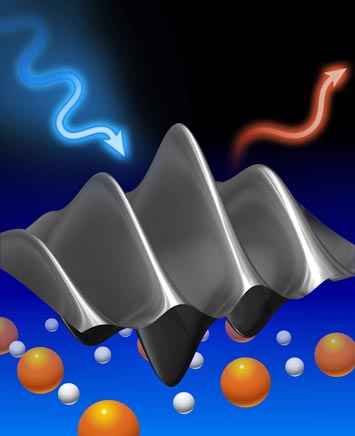 In this rendering, never-before-seen magnetic excitations ripple through a high-temperature superconductor, revealed for the first time by the Resonant Inelastic X-ray Scattering technique. By measuring the precise energy change of beams of incident x-rays (blue arrow) as they struck these quantum ripples and bounced off (red arrow), scientists discovered excitations present throughout the entire LSCO phase diagram.

The quantum ripples themselves have wavelengths measured on the Ångstrom scale—smaller than one billionth of a meter. To detect these tiny fluctuations, the scientists applied a technique called resonant inelastic x-ray scattering (RIXS) to the full range of LSCO films. The measurements were taken with the Advanced X-ray Emission Spectrometer at the European Synchrotron Radiation Facility (ESRF) in France. The design, construction, and commissioning of this instrument was led by Giacomo Ghiringhelli and Lucio Braicovich at the Politecnico di Milano in Italy and by Nick Brookes at the ESRF. The Brookhaven Lab team worked in close collaboration with these scientists to perform the RIXS measurements.

"This instrument allowed us to precisely measure how much energy the x-rays lost when they struck each LSCO sample," Dean said. "We could then pinpoint the presence or absence of magnetic excitations and track them across all the different doping levels."

Earlier studies using neutron scattering found that magnetic excitations appeared to vanish in the overdoped LSCO samples, bolstering the prominent theory that the waves play an essential role in superconductivity. The RIXS technique, however, is much more sensitive to magnetic excitations with certain wavelengths and capable of detecting otherwise imperceptible signals.

"Discovering excitations that do not depend on doping levels means that the relationship between HTS and the waves in these films is more intricate than we suspected," Hill said.

RIXS is currently able to detect magnetic excitations with a precision, or energy resolution, of about 100 milli-electron volts.  But as scientists seek more fundamental phenomena, even greater accuracy and sensitivity is required. Brookhaven Lab's National Synchrotron Light Source II (NSLS-II), expected to start operating in 2015, will produce some of the brightest x-rays in the world. The Soft Inelastic X-ray beamline under construction at NSLS-II promises unprecedented energy resolution for HTS investigations.

"Ultimately, the RIXS energy resolution is still not as good as we'd like," Dean said. "NSLS-II is going to be huge for the superconductivity game—absolutely huge. We'll be able to see excitations down at 10 milli-electron volts, and there should be real breakthroughs hidden there."

Solving the mystery of high-temperature superconductivity could radically improve technology ranging from wind turbines to medical imaging devices. But to manipulate the perfect electricity conveyance possible in HTS materials and possibly bring them up to room temperature, theorists must transform these experimental results into universally applicable rules.

"The joke is that HTS has in fact already been solved, but we just don't know which of the many competing theories is the right one," Hill said. "Our discovery was actually predicted by a few groups, and we're excited to see them leap on the results and drive our understanding forward. The work is fundamentally interesting, yes, but the potential applications are really exciting."

The research was funded through Brookhaven Lab's Center for Emergent Superconductivity, an Energy Frontier Research Center funded by the U.S. Department of Energy's Office of Science to seek understanding of the underlying nature of superconductivity in complex materials.

DOE's Office of Science is the single largest supporter of basic research in the physical sciences in the United States, and is working to address some of the most pressing challenges of our time. For more information, please visit http://science.energy.gov.