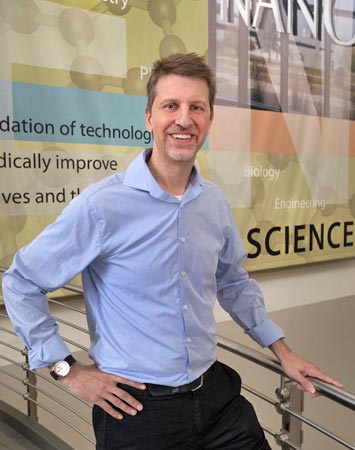 Charles Black inside the Center for Functional Nanomaterials.

The CFN started full operations in 2008 with the dual mission of providing the broader research community with state-of-the-art facilities to carry out advanced nanoscience projects and conducting world-leading in-house research to discover, understand, and exploit energy-related nanomaterials. Each year, the nanocenter hosts around 500 users from industry, universities, and government laboratories around the world.

The CFN's capabilities and the scientific expertise of its staff allow users to fabricate, characterize, and understand nanomaterials, all under one roof. The CFN's science mandate is to explore nanometer (billionth of a meter)-scale materials that address the nation's challenges in energy security, consistent with DOE's mission.

"I am energized by the chance to lead the CFN as we become an even more indispensable resource for nanoscience research. We have an incredibly talented and creative scientific staff, a highly integrated set of state-of-the-art scientific instruments, and a thoughtful strategic plan for our science and our facility," said Black. "Our future is very bright."

Black joined Brookhaven Lab in 2006 as a scientist and became leader of the Electronic Nanomaterials Group the following year. Using his expertise in block copolymers, or linked polymer chains, he has developed nanostructures for a broad range of applications, including photovoltaic devices, superhydrophobic surfaces, and chemical sensors.

"Besides extensive experience, a distinguished scientific career, and excellent management skills, Chuck brings to the new position an unsurpassed enthusiasm and devotion to the CFN mission," said former CFN Director Emilio Mendez, who is now director of Brookhaven's Energy Science and Technology Department. "I am convinced that under his leadership the CFN will reach new heights."

Prior to coming to the CFN, Black spent 10 years as a research staff member at the IBM Thomas J. Watson Research Center, where he began his career after obtaining a PhD in physics from Harvard University in 1996. While working at IBM, he pioneered the use of polymer self-assembly for the fabrication of high-performance semiconductor devices for microelectronics.

His inventions, more than 40 of which have been patented during his careers at Brookhaven and IBM, include novel electronic devices and electrical contact designs, photovoltaic materials and structures, water-repellent and broadband antireflective nanostructured surfaces, and tools for the quantitative analysis of nanostructures.

His research contributions have been recognized through numerous awards, including Battelle's 2014 "Inventor of the Year" award for his CFN work on nanoscale self-assembly approaches. Last year, Innovate Long Island recognized Black's work on antireflective coatings with an Innovator of the Year Award in Science and Technology. Previously, he has received an IBM Outstanding Technical Achievement Award, an IndustryWeek Technology of the Year Award, and a World Technology Award for Information Technology Hardware.

Black has also received a DOE Outstanding Mentor Award for his efforts to mentor young scientists.

Black is a Fellow of the American Physical Society, a member of the Board of Directors of the Materials Research Society, and a Senior Member of the Institute of Electrical and Electronics Engineers.

The Center for Functional Nanomaterials at Brookhaven National Laboratory is one of five Nanoscale Science Research Centers (NSRCs) funded by the DOE's Office of Science, the single largest supporter of basic research in the physical sciences in the United States. Located at DOE's Argonne, Brookhaven, Lawrence Berkeley, Oak Ridge, Sandia and Los Alamos national laboratories, the NSRCs comprise a suite of complementary user facilities for interdisciplinary research at the nanoscale. For more information about the NSRCs, please visit science.energy.gov.

Brookhaven National Laboratory is supported by the Office of Science of the U.S. Department of Energy.  The Office of Science is the single largest supporter of basic research in the physical sciences in the United States, and is working to address some of the most pressing challenges of our time. For more information, please visit science.energy.gov.