UPTON, NY—Three technologies developed at the U.S. Department of Energy's (DOE) Brookhaven National Laboratory have received 2016 R&D 100 Awards, which annually recognize the 100 most innovative technologies and services of the past year.

"It is an honor for Brookhaven Lab to be recognized as among the institutions where innovative research and development is taking place," said Brookhaven's Director Doon Gibbs. "Our three winners this year illustrate the wide range of scientific discovery happening at Brookhaven. My congratulations go out to all the innovative researchers being recognized by these awards." 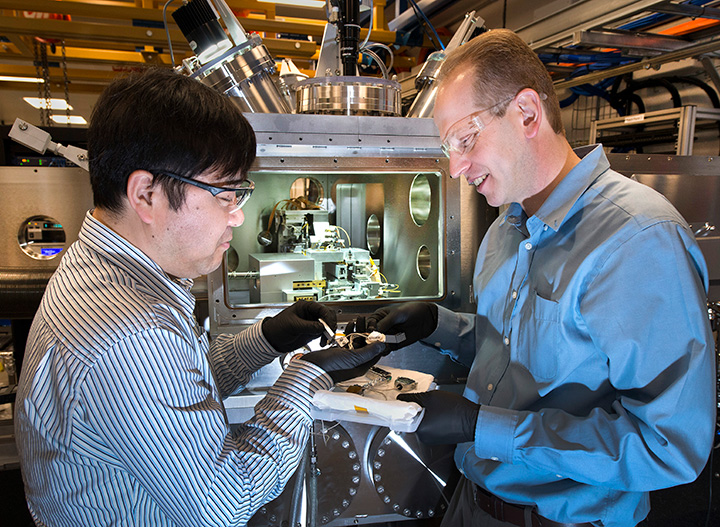 Brookhaven's custom-built x-ray microscope has advanced x-ray optics called multilayer Laue lenses for imaging a broad range of materials, with a spatial resolution of better than 15 nanometers—equivalent to 50,000 times smaller than a grain of sand. The microscope is installed at the National Synchrotron Light Source II (NSLS-II), a DOE Office of Science User Facility, where the user community can perform comprehensive structural and chemical studies on everything from soil samples to biological proteins and battery materials. The only one of its kind, this microscope is also the recipient of a 2016 Microscopy Today Innovation Award. Brookhaven physicists Evgeny Nazaretski and Yong Chu led the project, with contributions from Kenneth Lauer, Hanfei Yan, Brian Mullany, Nathalie Bouet, Juan Zhou, and Dennis Kuhne of Brookhaven and Deming Shu of Argonne. 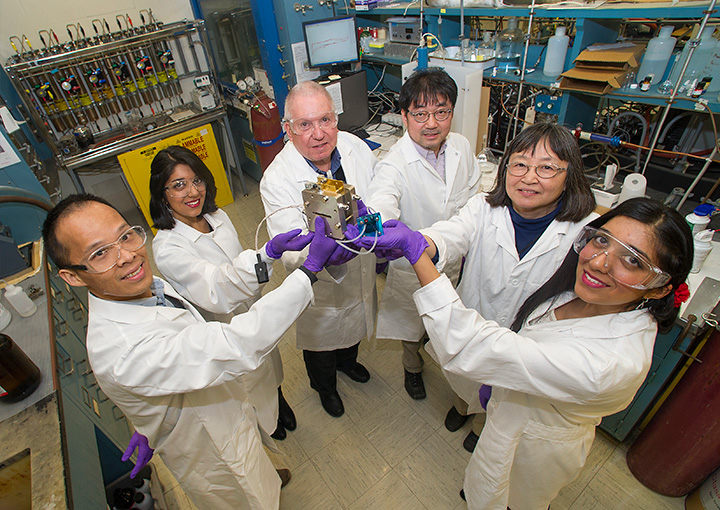 MoSoy Catalyst is a novel catalyst derived from a low-cost, earth-abundant metal—molybdenum (Mo)—and renewable soybeans (Soy). This catalyst produces hydrogen in an environmentally friendly, cost-effective way, eliminating the need for expensive metal catalysts such as platinum to speed up the rate at which water is split into hydrogen and oxygen. Through this water-splitting reaction, hydrogen can be released as a gas and used directly as a fuel or to produce energy-rich hydrocarbons. The project was led by Brookhaven chemists James Muckerman, Etsuko Fujita, and Kotaro Sasaki, with the participation of Wei-Fu Chen (former postdoctoral research associate) and twin sisters Shweta and Shilpa Iyer (former high-school summer students). 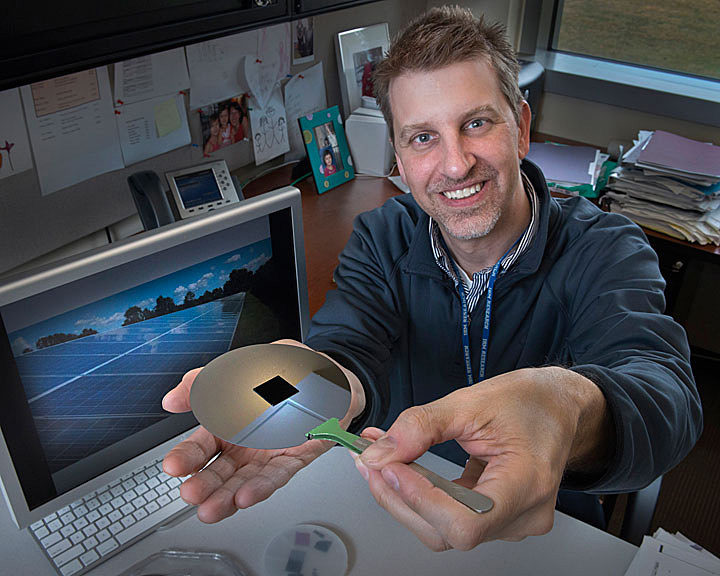 The nanotechnology-based surface-texturing method that Charles Black, pictured above, and his team developed at Brookhaven Lab's Center for Functional Nanomaterials imparts perfect anti-reflection and robust water-repellency to silicon, glass, and some plastics.

The nanotextured "coatings" developed at Brookhaven's Center for Functional Nanomaterials (CFN), another DOE Office of Science User Facility, are actually nanoscale features etched into the surfaces of silicon, glass, and some plastics. These textured surfaces absorb all wavelengths of light from any angle and also repel water extremely efficiently, with the water droplets carrying away particles of dirt. The method for achieving these textured surfaces leverages the ability of materials called block copolymers to self-assemble into ordered patterns that scientists can then use as templates for etching surfaces. The anti-reflective and water-repellent materials could enable the production of highly efficient self-cleaning solar cells, glare-free cell phone screens, and perfectly transparent windows. Brookhaven physicist and current CFN Director Charles Black led this project.

The award winners were announced on November 3, 2016 at a ceremony held during the 54th Annual R&D 100 Conference at the Gaylord National Resort & Convention Center in Oxon Hill, MD.

Researchers from DOE laboratories won 32 of the 100 awards this year. "The Department of Energy's National Laboratories are a global technology powerhouse that harness innovation to create jobs, support new industries, and help ensure America's competitive edge in areas of national security and science," said Secretary of Energy Ernest Moniz. "These awards demonstrate the incredible value that our National Laboratories continue to provide by using basic science to address tough challenges, from cryptography to clean energy, X-ray imaging to environmental remediation."

Since 1987, Brookhaven Lab has won more than 30 R&D 100 Awards for technologies including innovative new materials, chemistry breakthroughs, biomedical products, consumer items, and testing equipment, and for advances in high-energy physics.