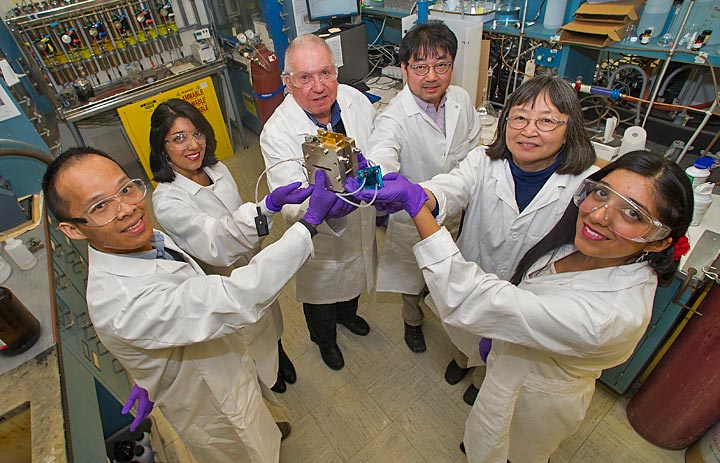 UPTON, NY — In a paper to be published in an upcoming issue of Energy & Environmental Science (now available online), researchers at the U.S. Department of Energy's Brookhaven National Laboratory describe details of a low-cost, stable, effective catalyst that could replace costly platinum in the production of hydrogen. The catalyst, made from renewable soybeans and abundant molybdenum metal, produces hydrogen in an environmentally friendly, cost-effective manner, potentially increasing the use of this clean energy source.

The research has already garnered widespread recognition for Shilpa and Shweta Iyer, twin-sister high school students who contributed to the research as part of an internship under the guidance of Brookhaven chemist Wei-Fu Chen, supported by projects led by James Muckerman, Etsuko Fujita, and Kotaro Sasaki.

"This paper reports the 'hard science' from what started as the Iyer twins' research project and has resulted in the best-performing, non-noble-metal-containing hydrogen evolution catalyst yet known—even better than bulk platinum metal," Muckerman said.

The project branches off from the Brookhaven group's research into using sunlight to develop alternative fuels. Their ultimate goal is to find ways to use solar energy—either directly or via electricity generated by solar cells—to convert the end products of hydrocarbon combustion, water and carbon dioxide, back into a carbon-based fuel. Dubbed "artificial photosynthesis," this process mimics how plants convert those same ingredients to energy in the form of sugars. One key step is splitting water, or water electrolysis.

"By splitting liquid water (H2O) into hydrogen and oxygen, the hydrogen can be regenerated as a gas (H2) and used directly as fuel," Sasaki explained. "We sought to fabricate a commercially viable catalyst from earth-abundant materials for application in water electrolysis, and the outcome is indeed superb."

This form of hydrogen production could help the scientists achieve their ultimate goal.

"A very promising route to making a carbon-containing fuel is to hydrogenate carbon dioxide (or carbon monoxide) using solar-produced hydrogen," said Fujita, who leads the artificial photosynthesis group in the Brookhaven Chemistry Department.

But with platinum as the main ingredient in the most effective water-splitting catalysts, the process is currently too costly to be economically viable.

Comsewogue High School students Shweta and Shilpa Iyer entered the lab as the search for a cost-effective replacement was on.

The Brookhaven team had already identified some promising leads with experiments demonstrating the potential effectiveness of low-cost molybdenum paired with carbon, as well as the use of nitrogen to confer some resistance to the corrosive, acidic environment required in proton exchange membrane water electrolysis cells. But these two approaches had not yet been tried together.

The students set out to identify plentiful and inexpensive sources of carbon and nitrogen, and test ways to combine them with a molybdenum salt.

"The students became excited about using familiar materials from their everyday lives to meet a real-world energy challenge," Chen recounted. The team tested a wide variety of sources of biomass—leaves, stems, flowers, seeds, and legumes—with particular interest in those with high protein content because the amino acids that make up proteins are a rich source of nitrogen. High-protein soybeans turned out to be the best. 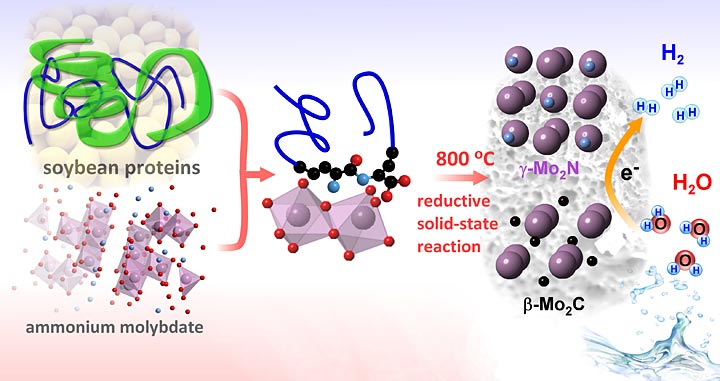 Splitting hydrogen from water: This illustration depicts the synthesis of a new hydrogen-production catalyst from soybean proteins and ammonium molybdate. Mixing and heating the ingredients leads to a solid-state reaction and the formation of nanostructured molybdenum carbide and molybdenum nitride crystals. The hybrid material effectively catalyzes the conversion of liquid water to hydrogen gas while remaining stable in an acidic environment.

To make the catalyst the team ground the soybeans into a powder, mixed the powder with ammonium molybdate in water, then dried and heated the samples in the presence of inert argon gas. "A subsequent high temperature treatment (carburization) induced a reaction between molybdenum and the carbon and nitrogen components of the soybeans to produce molybdenum carbides and molybdenum nitrides," Chen explained. "The process is simple, economical, and environmentally friendly."

Electrochemical tests of the separate ingredients showed that molybdenum carbide is effective for converting H2O to H2, but not stable in acidic solution, while molybdenum nitride is corrosion-resistant but not efficient for hydrogen production. A nanostructured hybrid of these two materials, however, remained active and stable even after 500 hours of testing in a highly acidic environment.

Structural and chemical studies of the new catalyst conducted at Brookhaven's National Synchrotron Light Source (NSLS) and the Center for Functional Nanomaterials (CFN) are also reported in the paper, and provide further details underlying the high performance of this new catalyst.

"The presence of nitrogen and carbon atoms in the vicinity of the catalytic molybdenum center facilitates the production of hydrogen from water," Muckerman said.

The scientists also tested the MoSoy catalyst anchored on sheets of graphene—an approach that has proven effective for enhancing catalyst performance in electrochemical devices such as batteries, supercapacitors, fuel cells, and water electrolyzers. Using a high-resolution transmission microscope in Brookhven's Condensed Matter Physics and Materials Science Department, the scientists were able to observe the anchored MoSoy nanocrystals on 2D graphene sheets.

"The direct growth of anchored MoSoy nanocrystals on graphene sheets may enhance the formation of strongly coupled hybrid materials with intimate, seamless electron transfer pathways, thus accelerating the electron transfer rate for the chemical desorption of hydrogen from the catalyst, further reducing the energy required for the reaction to take place," Sasaki said.

The scientists are conducting additional studies to gain a deeper understanding of the nature of the interaction at the catalyst-graphene interface, and exploring ways to further improve its performance.

In the paper, the authors—including the two high-school students—conclude: "This study unambiguously provides evidence that a cheap and earth-abundant transition metal such as molybdenum can be turned into an active catalyst by the controlled solid-state reaction with soybeans…The preparation of the MoSoy catalyst is simple and can be easily scaled up. Its long-term durability and ultra-low capital cost satisfy the prerequisites for its application in the construction of large-scale devices. These findings thus open up new prospects for combining inexpensive biomass and transition metals…to produce catalysts for electro-catalytic reactions."

Additional collaborators in this research were Chiu-Hui Wang and Yimei Zhu of Brookhaven Lab.