Chasing Lithium Ions on the Move in a Fast-Charging Battery

Local distortions dynamically emerging in the atomic structure of the electrode during operation enable the rapid storage and release of lithium ions—a finding that provides guidance on how to design battery materials to reduce charging times for electric vehicles, cell phones, and other battery-powered devices 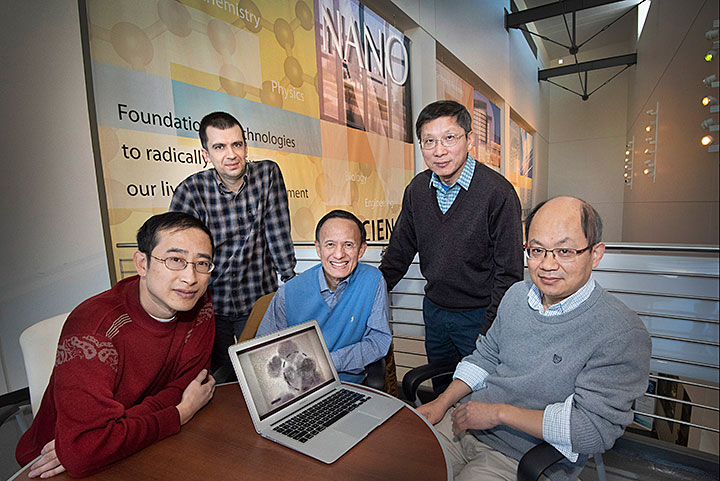 UPTON, NY—A team of scientists led by the U.S. Department of Energy’s (DOE) Brookhaven National Laboratory and Lawrence Berkeley National Laboratory has captured in real time how lithium ions move in lithium titanate (LTO), a fast-charging battery electrode material made of lithium, titanium, and oxygen. They discovered that distorted arrangements of lithium and surrounding atoms in LTO “intermediates” (structures of LTO with a lithium concentration in between that of its initial and end states) provide an “express lane” for the transport of lithium ions. Their discovery, reported in the Feb. 28 issue of Science, could provide insights into designing improved battery materials for the rapid charging of electric vehicles and portable consumer electronics such as cell phones and laptops.

“Consider that it only takes a few minutes to fill up the gas tank of a car but a few hours to charge the battery of an electric vehicle,” said co-corresponding author Feng Wang, a materials scientist in Brookhaven Lab’s Interdisciplinary Sciences Department.  “Figuring out how to make lithium ions move faster in electrode materials is a big deal, as it may help us build better batteries with greatly reduced charging time.”

Lithium-ion batteries work by shuffling lithium ions between a positive and negative electrode (cathode and anode) through a chemical medium called an electrolyte. Graphite is commonly employed as the anode in state-of-the-art lithium-ion batteries, but for fast-charging applications, LTO is an appealing alternative. LTO can accommodate lithium ions rapidly, without suffering from lithium plating (the deposition of lithium on the electrode surface instead of internally).

As LTO accommodates lithium, it transforms from its original phase (Li4Ti5O12) to an end phase (Li7Ti5O12), both of which have poor lithium conductivity. Thus, scientists have been puzzled as to how LTO can be a fast-charging electrode. Reconciling this seeming paradox requires knowledge of how lithium ions diffuse in intermediate structures of LTO (those with a lithium concentration in between that of Li4Ti5O12 and Li7Ti5O12), rather than a static picture derived solely from the initial and end phases. But performing such characterization is a nontrivial task. Lithium ions are light, making them elusive to traditional electron- or x-ray-based probing techniques—especially when the ions are shuffling rapidly within active materials, such as LTO nanoparticles in an operating battery electrode.

In this study, the scientists were able to track the migration of lithium ions in LTO nanoparticles in real time by designing an electrochemical cell to operate inside a transmission electron microscope (TEM). This electrochemical cell enabled the team to conduct electron energy-loss spectroscopy (EELS) during battery charge and discharge. In EELS, the change in energy of electrons after they have interacted with a sample is measured to reveal information about the sample’s local chemical states. In addition to being highly sensitive to lithium ions, EELS, when carried out inside a TEM, provides the high resolution in both space and time needed to capture ion transport in nanoparticles. 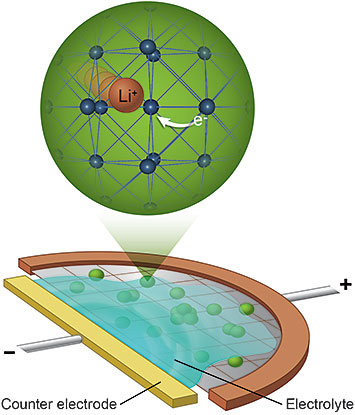 A schematic of the mini electrochemical cell that the scientists built to chase lithium ions (orange) moving in the lattice of LTO (blue).

“The team tackled a multifold challenge in developing the electrochemically functional cell—making the cell cycle like a regular battery while ensuring it was small enough to fit into the millimeter-sized sample space of the TEM column,’’ said co-author and senior scientist Yimei Zhu, who leads the Electron Microscopy and Nanostructure Group in Brookhaven’s Condensed Matter Physics and Materials Science (CMPMS) Division. “To measure the EELS signals from the lithium, a very thin sample is needed, beyond what is normally required for the transparency of probing electrons in TEMs.”

The resulting EELS spectra contained information about the occupancy and local environment of lithium at various states of LTO as charge and discharge progressed. To decipher the information, scientists from the Computational and Experimental Design of Emerging Materials Research (CEDER) group at Berkeley and the Center for Functional Nanomaterials (CFN) at Brookhaven simulated the spectra. On the basis of these simulations, they determined the arrangements of atoms from among thousands of possibilities. To determine the impact of the local structure on ion transport, the CEDER group calculated the energy barriers of lithium-ion migration in LTO, using methods based on quantum mechanics.

“Computational modeling was very important to understand how lithium can move so fast through this material,” said co-corresponding author and CEDER group leader Gerbrand Ceder, Chancellor’s Professor in the Department of Materials Science and Engineering at UC Berkeley and a senior faculty scientist in the Materials Science Division at Berkeley Lab. “As the material takes up lithium, the atomic arrangement becomes very complex and difficult to conceptualize with simple transport ideas. Computations were able to confirm that the crowding of lithium ions together makes them highly mobile.”

“An important aspect of this work was the combination of experiment and simulation, as simulations can help us to interpret experimental data and develop a mechanistic understanding,” said co-author Deyu Lu, a physicist in the CFN Theory and Computation Group. “The expertise in computational spectroscopy we have been developing at CFN over the years plays an important role in this collaborative user project in identifying key spectral fingerprints in EELS and unraveling their physical origin in atomic structures and their electronic properties.”

The team’s analysis revealed that LTO has metastable intermediate configurations in which the atoms are locally not in their usual arrangement. These local “polyhedral” distortions lower the energy barriers, providing a pathway through which lithium ions can quickly travel.

A movie of lithium ions quickly moving along "easy pathways" in intermediate configurations of LTO. Imagine the LTO lattice as a racecar obstacle course that the lithium ions have to navigate around. In its original phase (Li4Ti5O12) and the end phase it transforms into to accommodate lithium ions (Li7Ti5O12), LTO has atomic configurations in which many obstacles are in the way. Thus, lithium ions must travel slowly through the obstacle course. But in intermediate configurations of LTO (such as the Li5+xTi5O12 shown in the movie), local distortions in the arrangement of atoms surrounding lithium occur along the boundary of these two phases. These distortions slightly shovel the obstacles out of the way, giving rise to a "fast lane" for lithium ions to speed through.

“Unlike gas freely flowing into your car’s gas tank, which is essentially an empty container, lithium needs to “fight” its way into LTO, which is not a completely open structure,” explained Wang. “To get lithium in, LTO transforms from one structure to another. Typically, such a two-phase transformation takes time, limiting the fast-charging capability. However, in this case, lithium is accommodated more quickly than expected because local distortions in the atomic structure of LTO create more open space through which lithium can easily pass. These highly conductive pathways happen at the abundant boundaries existing between the two phases.”

Next, the scientists will explore the limitations of LTO—such as heat generation and capacity loss associated with cycling at high rates—for real applications. By examining how LTO behaves after repeatedly absorbing and releasing lithium at varying cycling rates, they hope to find remedies for these issues. This knowledge will inform the development of practically viable electrode materials for fast-charging batteries.

“The cross-institutional efforts combining in situ spectroscopy, electrochemistry, computation, and theory in this work set a model for conducting future research,” said Zhu.

“We look forward to examining transport behaviors in fast-charging electrodes more closely by fitting our newly developed electrochemical cell to the powerful electron and x-ray microscopes at Brookhaven’s CFN and National Synchrotron Light Source II (NSLS-II),” said Wang. “By leveraging these state-of-the-art tools, we will be able to gain a complete view of lithium transport in the local and bulk structures of the samples during cycling in real time and under real-world reaction conditions.”

The scientists carried out the experimental work using TEM facilities in Brookhaven’s CMPMS Division and the theoretical work using computational resources of Brookhaven’s Scientific Data and Computing Center (part of the Computational Science Initiative). Both CFN and NSLS-II are DOE Office of Science User Facilities. The research was supported by the Laboratory Directed Research and Development program at Brookhaven; DOE’s Office of Energy Efficiency and Renewable Energy (EERE), Vehicle Technologies Office (VTO), under the Advanced Battery Materials Research program; DOE’s Offices of Basic Energy Sciences and EERE VTO; and the National Science Foundation.