Toward Scaling Up Nanocages to Trap Noble Gases

Commercially available materials could bring a method for confining noble gases inside tiny cage-like structures from the lab to industrial scale for nuclear energy, health, and other applications 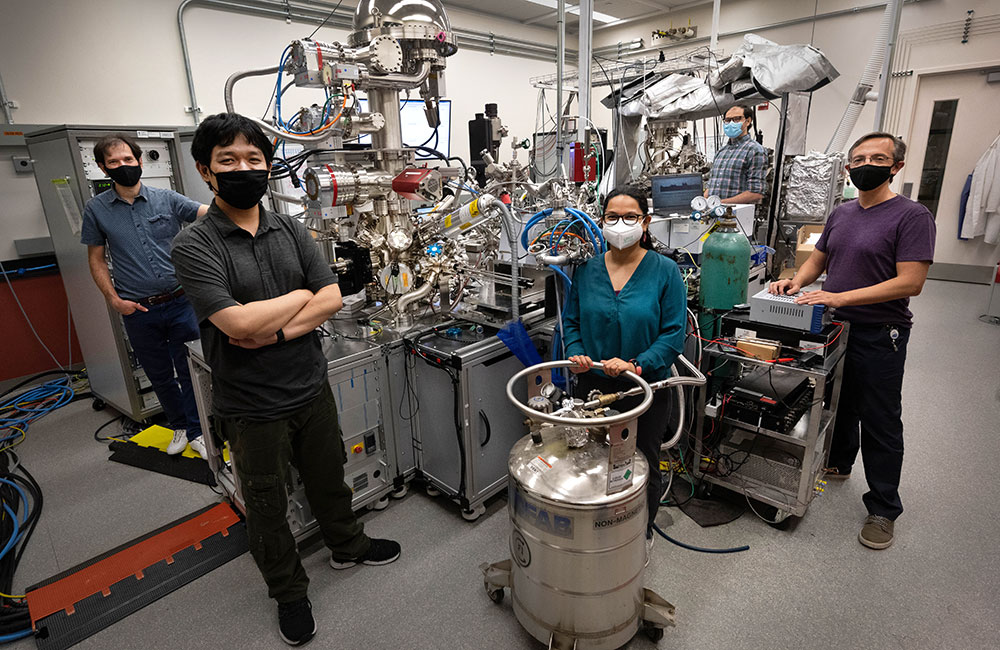 UPTON, NY—Over the past few years, scientists have demonstrated how cage-like, porous structures made of silicon and oxygen and measuring only billionths of a meter in size can trap noble gases like argon, krypton, and xenon. However, for these silica nanocages to be practically useful—for example, to improve the efficiency of nuclear energy production—they need to be scaled up from their lab versions. The scientists have now taken a step forward in bringing this technology out of the lab and into the real world. As they recently reported in Small, commercially available materials may provide a potentially scalable platform for trapping noble gases.

“Making one square centimeter of our lab-scale nanocages, which can trap only nanograms of gas, takes us a couple weeks and requires expensive starting components and equipment,” said co-corresponding author Anibal Boscoboinik, a materials scientist in the Interface Science and Catalysis Group at the Center for Functional Nanomaterials (CFN), a U.S. Department of Energy (DOE) Office of Science User Facility at Brookhaven National Laboratory. “There are commercial processes to synthesize tons of these silica nanocages, which are so inexpensive they’re used as additives in concrete. However, these commercial materials do not trap noble gases, so a challenge for scaling our technology was to understand what is special about our nanocages.”

Boscoboinik has been leading the nanocages research at the CFN since 2014, following an act of serendipity. He and colleagues had just finished a catalysis experiment with silica nanocages deposited on top of a single crystal of ruthenium metal when they noticed individual atoms of argon gas had become trapped inside the structure’s nanosized pores. With this accidental finding, they became the first group to trap a noble gas inside a two-dimensional (2-D) porous structure at room temperature. In 2019, they trapped two other noble gases inside the cages: krypton and xenon. In this second study, they learned that for the trapping to work, two processes needed to happen: gas atoms had to be converted into ions (electrically charged atoms) before entering the cages, and the cages had to be in contact with a metallic support to neutralize the ions once inside the cages—effectively trapping them in place.

With this understanding, in 2020, Boscoboinik and his team filed a patent application, now pending. That same year, through its Technology Commercialization Fund (TCF), the DOE Office of Technology Transitions selected a research proposal submitted by the CFN in collaboration with the Brookhaven Nuclear Science and Technology Department and Forge Nano to scale up the lab-developed nanocages. The goal of this scale-up is to maximize the surface area for trapping krypton and xenon, both products of the nuclear fission of uranium. Capturing them is desirable to improve the efficiency of nuclear reactors, prevent operational failures due to increasing gas pressures, reduce radioactive nuclear waste, and detect nuclear weapons tests.

A start to scale-up 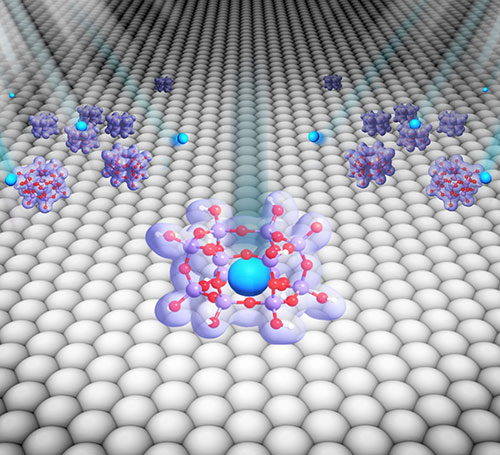 A representation of silica nanocages on a thin film of ruthenium trapping atoms of xenon (blue).

In parallel to the TCF effort, the CFN team independently began to explore how they could scale the nanocages for practical applications, nuclear and beyond. During their explorations, the CFN team found the company that makes large volumes of the silica nanocages, in the form of a powder. Instead of depositing the nanocages on single crystals of ruthenium, the team deposited them on thin films of ruthenium, which are less costly. Unlike the lab-based nanocages, these nanocages have organic (carbon-containing) components. So, after depositing the cages on the thin films, they heated up the material in an oxidizing environment to burn off these components. However, the cages wouldn’t trap any gases.

“We found that the metal has to be in the metallic state,” said first author Yixin Xu, a graduate student in the Materials Science and Chemical Engineering Department at Stony Brook University. “While burning the organic components, we partially oxidize ruthenium. We need to heat up the material again in hydrogen or another reducing environment to get the metal back to its metallic state. Then, the metal can act as an electron source to neutralize the gas inside the cages.”

Next, the CFN scientists and their collaborators from Stony Brook University tested whether the new material would still trap the gases. To do so, they performed ambient-pressure x-ray photoelectron spectroscopy (AP-XPS) at the In situ and Operando Soft X-ray Spectroscopy (IOS) beamline at the National Synchrotron Light Source II (NSLS-II), another DOE Office of Science User Facility at Brookhaven Lab. In AP-XPS, x-rays excite a sample, causing electrons to be emitted from the surface. A detector records the number and kinetic energy of emitted electrons. By plotting this information, scientists can infer the sample’s chemical composition and chemical bonding states. In this study, the x-rays were not only important for the measurements but also in ionizing the gas—here, xenon. They started the experiment at room temperature and gradually increased the temperature, finding the optimal range for trapping (350 to 530 degrees Fahrenheit). Outside this range, the efficiency starts decreasing. At 890 degrees Fahrenheit, the trapped xenon is completely released. Boscoboinik likens this complex temperature-dependent process to an elevator door opening and closing.

“Imagine the door is opening and closing extremely fast,” said Boscoboinik. “You would need to be running extremely fast to get inside. Like an elevator, the nanocages have a pore “mouth” that opens and closes. The rate at which the cages open and close needs to be a good match to the rate at which heated gas ions are moving to maximize the chance of ions getting into the cages and becoming neutralized.”

Following these experiments, scientists from Universidad Nacional de San Luis in Argentina and University of Pennsylvania validated this elevator door hypothesis. Applying Monte Carlo methods—mathematical techniques for estimating possible outcomes of uncertain events—they modeled the most probable speed of the ions at different gas temperatures. Another collaborator at the Catalysis Center for Energy Innovation calculated the energies required for xenon to exit the cages.

Now, the scientists will make the materials with a high surface area (a couple hundred square meters) and see whether they continue to function as desired. They will also investigate more practical ways of ionizing the gas.

The team is considering several potential applications for their technology. For example, the nanocages may be able to trap noble gases like xenon and krypton from the air in a more energy-efficient way. Currently, these gases are separated from the air using an energy-intensive process in which the air must be cooled to extremely low temperatures.

Xenon and krypton are used to manufacture many products, such as lighting. One of the main uses of xenon is in high-intensity discharge lamps, including some bright white car headlights. Likewise, krypton is used for airport runway lights and photographic flashes for high-speed photography.

Given previous theoretical calculations, the team believes their process should also be able to trap radioactive noble gases, including radon. Commonly found in basements and lower levels of buildings, radon can damage lung cells, potentially leading to cancer. This capability to trap radioactive noble gases would be relevant to several applications, such as mitigating released radioactive gases, monitoring nuclear nonproliferation, and producing medically relevant isotopes. The CFN team is exploring the medical application in collaboration with the Medical Isotope Research and Production Program at Brookhaven.

“In surface science, fundamental studies don’t often lead to useful products right away,” said Boscoboinik. “We’re trying to quickly move into doing something impactful with these materials by increasing the level of complexity one step at a time.”

This CFN-led research was supported by the DOE Office of Science and American Chemical Society Petroleum Research Fund. The CFN is a DOE Nanoscale Science Research Center. The AP-XPS instrument at the IOS beamline at NSLS-II was built through a partnership between NSLS-II and CFN. The Catalysis Center for Energy Innovation is an Energy Frontier Research Center located at the University of Delaware and funded by the DOE Office of Science.