Through a U.S. Department of Energy Technology Commercialization Fund project supported by the Office of Nuclear Energy, national lab and industry scientists will develop xenon- and krypton-trapping "nanocages" to improve nuclear power production and waste remediation 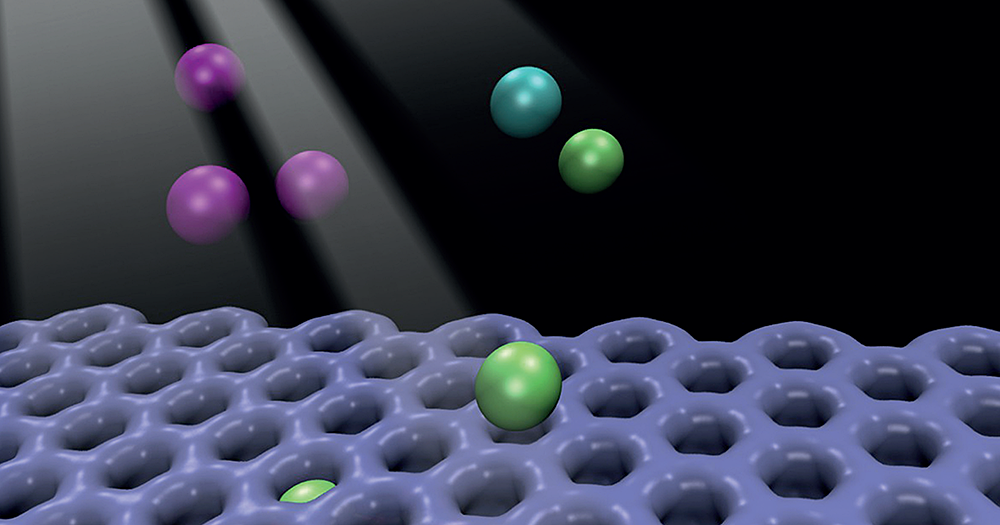 An illustration of individual atoms of three different noble gases—argon, krypton, and xenon—getting trapped in a 2-D array of nanosized "cages." These porous frameworks have a hexagonal prism shape and are made of silicon and oxygen. Brookhaven Lab and industry partner Forge Nano will advance this technology for nuclear energy applications.

UPTON, NY—A research proposal submitted by the Center for Functional Nanomaterials (CFN) and Nuclear Science and Technology (NST) Department at the U.S. Department of Energy’s (DOE) Brookhaven National Laboratory, with the startup Forge Nano as a partner, has been selected as a 2020 Technology Commercialization Fund (TCF) project. Of the 82 technologies selected from among more than 220 applications, three were developed at Brookhaven Lab. This TCF funding is the first to be awarded to the CFN, where the technology was developed.

The DOE Office of Technology Transitions manages the TCF program, which was created by the Energy Policy Act of 2005 to promote promising energy technologies developed at DOE national labs. Federal funding awarded through the TCF is matched with nonfederal contributions by private partners interested in commercializing the technology. The goal of the TCF is to advance the commercialization of these technologies and strengthen lab-private sector partnerships to deploy them to the marketplace.

The project that Brookhaven Lab and Forge Nano scientists will partner on is called “Maturation of Technology for Trapping Xenon and Krypton.”

Xenon (Xe) and krypton (Kr) are two noble gases produced during nuclear fission—a reaction in which the nucleus of an atom splits into two or more smaller, lighter nuclei—inside nuclear reactors. These gases can decrease the amount of energy extracted from a nuclear fuel source by increasing the pressure in the fuel rod (the sealed tubes that contain fissionable material) and reduce fuel rod lifetime. Moreover, radioactive isotopes of Xe and Kr can become trapped in unreacted fuel, which requires disposal. Therefore, capturing and removing Xe and Kr could improve the energy-generation efficiency of nuclear reactors and reduce radioactive waste.

For several years, scientists in the NST Department have been exploring various candidate materials—including microporous carbon and porous metal-organic frameworks—to absorb these fission gases, thereby reducing pressure buildup in fuel rods. Separately, scientists at the CFN have been developing 2-D porous, cage-like frameworks made of ultrathin—less than a single nanometer—inorganic silica (silicon and oxygen) and aluminosilicate (aluminum, silicon, and oxygen) films supported on metal surfaces. In 2017, they became the first team to trap a noble gas inside a 2-D porous structure at room temperature. Last year, they discovered the mechanism by which these “nanocages” trap and separate single atoms of argon (Ar), Kr, and Xe at room temperature. Following these studies, the CFN submitted an invention disclosure on the silicate materials for trapping gases (among other applications) to Brookhaven’s Intellectual Property Legal Group, which together with Brookhaven’s Office of Technology Transfer, helped the team explore promising applications and connected CFN and NST scientists. 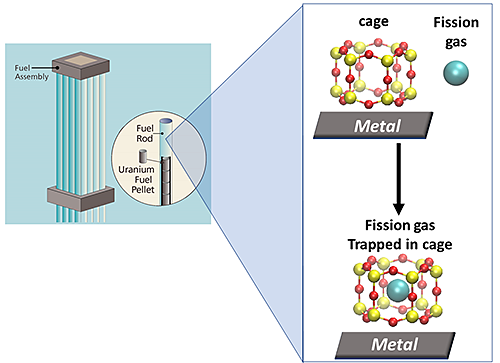 A schematic of the proposed technology. A fuel assembly is made up of hundreds of fuel rods containing pellets of fissionable material, which provide fuel for the nuclear reactor. As shown in the callout, the silicate cages would be put inside the fuel rods to trap noble gases resulting from the fission reaction.

“Trapping single atoms of noble gases at noncryogenic temperatures is extremely difficult and a relevant challenge for nuclear waste remediation, among other industrial applications,” said CFN Interface Science and Catalysis Group materials scientist Anibal Boscoboinik, who has been leading the work. “This difficulty is primarily due to the weak interaction of noble gases in their neutral state. The approach developed at the CFN enables trapping of the noble gas atoms in cages via ionization—converting them to electrically charged atoms, or ions—for a very brief time so they can enter the cages. Once they are inside, they go back to their neutral, stable state, but by that time they are already physically confined in the cages.”

Now, through the TCF, Brookhaven will partner with Forge Nano to scale up the manufacture of the lab-demonstrated nanocages to maximize the surface area for trapping Kr and Xe atoms. One possible way to achieve this optimization is to place the nanoporous materials inside larger (mesoporous) materials—in other words, a cage within a cage. Forge Nano will apply its expertise in atomic layer deposition—a technique for depositing one atom at a time onto a surface material until a complete layer is formed—for precision nanocoatings to coat the inside of the mesopores with nanocages, where the trapping will occur.

“This innovative material application is a perfect match for us at Forge Nano for coating atomically thin controlled coatings,” said project partner Staci Moulton, the application engineer for business development at Forge Nano. “We are excited to work with CFN researchers to scale up their breakthrough.”

“Research in our group focuses on understanding at a fundamental level the physicochemical processes that happen on functional surfaces and interfaces exposed to chemicals,” said CFN Interface Science and Catalysis Group Leader Dario Stacchiola. “To probe these processes in real time and under operating conditions, we develop and operate state-of-the-art in situ and operando tools.”

To follow the trapping of the gases, they will perform x-ray photoelectron spectroscopy (XPS), a technique for identifying and quantifying the elements on a sample’s surface. These studies will be conducted using ambient-pressure (AP) XPS instruments located in the CFN Proximal Probes Facility and at the In situ and Operando Soft X-ray Spectroscopy (IOS) beamline of Brookhaven’s National Synchrotron Light Source II (NSLS-II).

If successful, this technology—which Brookhaven’s Intellectual Property Legal Group recently submitted a provisional patent application for—would have a major impact on the nuclear power industry and environment at large. As of 2018, nearly 450 nuclear reactors were generating electricity, equivalent to 10 percent of the global electricity supply. Nuclear power is the second largest source of low-carbon electricity (hydropower is the first).

“The nanocages can be transformative in the field of nuclear power generation by improving the efficiency and reliability of nuclear reactors and reducing radioactive waste and emission,” said Boscoboinik.

“A technology to more efficiently trap, separate, and sequester noble gases has applications in advanced nuclear reactors,” added Ecker. “The nanocages have the potential to become an enabling technology for future reactors. We’re very excited to explore this possibility by working with our partner, Forge Nano.”

The two other projects that Brookhaven received 2020 TCF awards for are “Surface Modification of Graphite Anodes Enabling Fast Charging of Li-ion Batteries” and “Sustainable Well Cement for Geothermal, Thermal Recovery and Carbon Storage Wells.” Brookhaven researchers interested in learning more about the TCF or participating in the next call should contact Office of Technology Transfer Manager Poorni Upadhya at (631) 344-4711 or pupadhya@bnl.gov.

If you are interested in partnering with CFN scientists on future TCF proposals or other projects, please contact CFN Assistant Director for Strategic Partnerships Priscilla Antunez at (631) 344-6186 or pantunez@bnl.gov.