CFN scientists have reversibly trapped and released single argon atoms inside tiny cages made of silicon, aluminum and oxygen. The single-atom cages are formed in a flat zeolite crystal only 0.5 nanometers thick. The molecular permeability of the 2D zeolites is reversibly tuned by the presence of argon.

Trapping single gas atoms on a surface allows them to be studied using sensitive surface science probes, and provides an experimental route to obtaining unprecedented detailed, atomic-scale information about the behavior of confined gases. 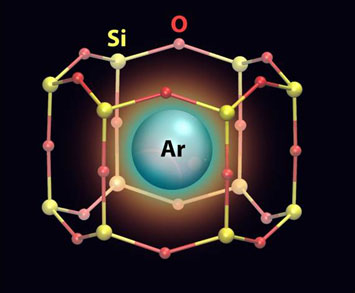 Illustration of an argon atom trapped inside a two-dimensional zeolite cage. The coordinates of the zeolite atoms calculated using density functional theory calculations.

Single atoms of noble gas argon atoms were trapped at room temperature in 0.5 nm cages forming a two-dimensional arrangement on a surface. Previously, immobilizing inert argon atoms on a surface required either cooling to cryogenic temperatures or accelerating argon ions with high energy to implant them on the surface. In these work, exposure to modest argon pressures during an ambient pressure XPS experiment resulted in the inert gas atoms being trapped. The atoms remain in the cages upon evacuation and are removed when heating to 400 K in vacuum. The main set of experiments carried out at the CFN APPES endstation of the CSX-2 beamline of NSLS-II as well at other instruments at the CFN and the Chemistry Department. The location, energetics and mechanistic aspects of this process were carried out by Density Functional Theory calculations using CFN theory and computation facilities as well as the National Energy Research Scienti?c Computing Center of the DOE. This work has important implications for fundamental studies since it provides a new playground for studying single atoms of noble gases in confinement with the vast toolkit of surface science, including future use of scanning probe microscopies to study their behavior. Additionally, this system may allow fundamental studies related to the trapping of noble gases for nuclear waste remediation given that the release of radiative noble gases from nuclear reactors is a problem yet to be solved in a satisfactorily manner.

Research carried out at the Center for Functional Nanomaterials and National Synchrotron Light Source II, which is supported by the U.S. Department of Energy, Office of Basic Energy Sciences, under Contract No. DE-SC0012704.

This research used resources of the National Energy Research Scientific Computing Center, a DOE Office of Science User Facility supported by the Office of Science of the U.S. Department of Energy under Contract No. DE-AC02-05CH11231.