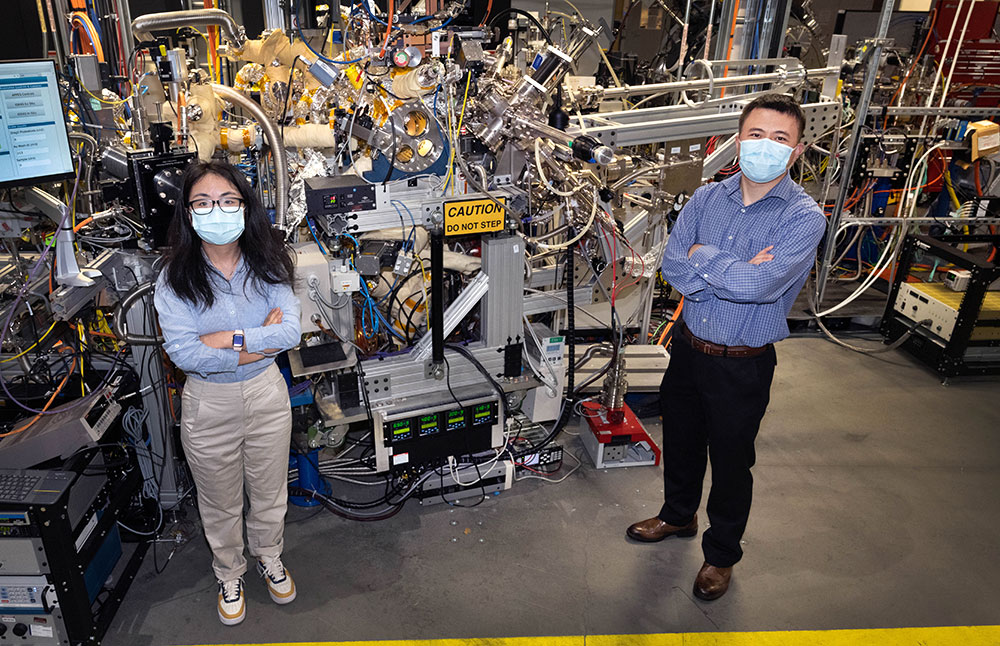 Co-first author Sha Tan, left, and Brookhaven chemist Enyuan Hu at the IOS beamline at NSLS-II, where part of the research was conducted.

UPTON, NY—A team of researchers led by chemists at the U.S. Department of Energy’s (DOE) Brookhaven National Laboratory has learned that an electrolyte additive allows stable high-voltage cycling of nickel-rich layered cathodes. Their work could lead to improvements in the energy density of lithium batteries that power electric vehicles.

The findings, published on May 9 in Nature Energy, offer a remedy to notorious degradation problems that crop up for nickel-rich cathode materials, especially at high voltages. This research was conducted as part of the DOE-sponsored Battery500 Consortium, which is led by DOE’s Pacific Northwest National Laboratory (PNNL) and is working to significantly increase the energy density of lithium batteries for electric vehicles.

Sha Tan, a co-first author and Ph.D. candidate at Stony Brook University conducting research with the Electrochemical Energy Storage group at Brookhaven Lab, was originally studying how an additive, lithium difluorophosphate (LiPO2F2), could be used to improve low-temperature performance of batteries. Out of curiosity, she tried using the additive for high voltage cycling at room temperature.

“I found if I pushed the voltage up to 4.8 volts (V), this additive really gives great protection over the cathode and the battery achieved excellent cycling performance,” Tan said.

Nickel-rich layered cathode materials promise high energy density for next-generation batteries when paired with lithium metal anodes. But those materials are prone to capacity loss. One of the main issues is particle cracking during high-voltage charge-discharge cycles. High voltage operation is important because the total energy stored in a battery, important for vehicle range, goes up as the useful operating voltage increases.

Another issue is transition metal dissolution from the cathode and its subsequent deposition on the anode. This is known as “crosstalk” in the battery community, said Brookhaven chemist Enyuan Hu, who led the research. During high-voltage charging, small amounts of transition metals in the cathode crystal lattice dissolve, and then journey through the electrolyte, and deposit on the anode side. When this happens, both cathode and anode degrade. The result: poor battery capacity retention.

Researchers found that introducing a small amount of additive to the electrolyte stifles that crosstalk.

As the additive decomposes, it produces lithium phosphate (Li3PO4) and lithium fluoride (LiF) to form a highly protective cathode-electrolyte-interphase—a solid thin layer that forms on the battery’s cathode during cycling.

The electrolyte additive enables a nickel-rich layered cathode to be cycled at high voltages to increase the energy density and still retain 97 percent of its initial capacity after 200 cycles, the researchers found. 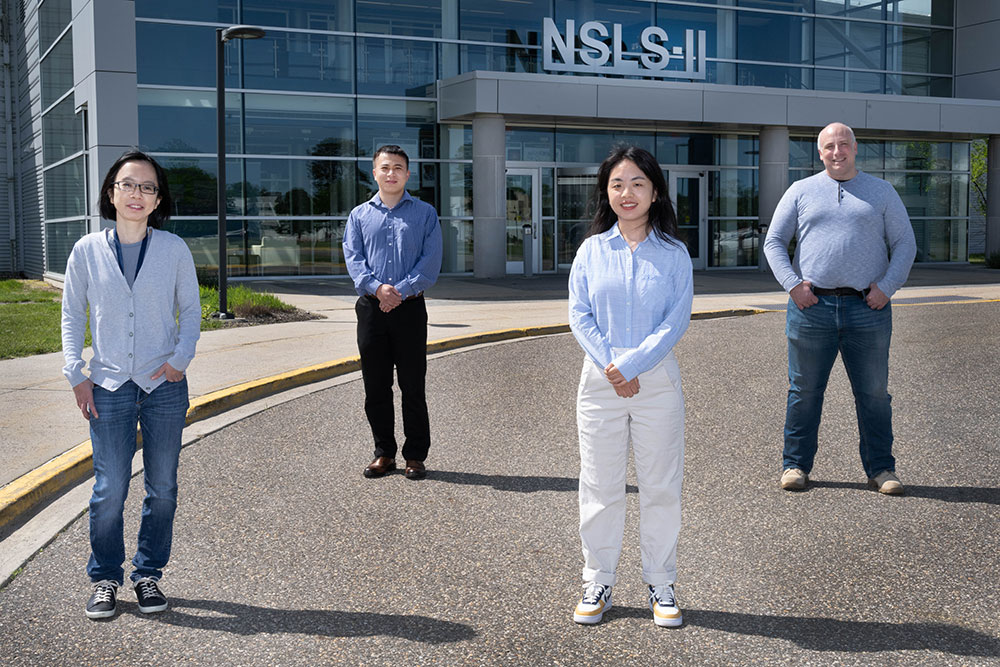 Members of the Brookhaven team are shown outside NSLS-II, where four beamlines were used to conduct parts of the research. Pictured from left to right are NSLS-II scientist Iradwikanari Waluyo, Brookhaven chemist Enyuan Hu, co-first author Sha Tan, and NSLS-II scientist Adrian Hunt.

But improved performance wasn’t the only exciting result for the researchers, Hu said.

The most common nickel-rich cathode is in the form of polycrystals – aggregates of many nanometer-scale crystals, also known as primary particles, lumped together to form a larger secondary particle. While this promises a relatively easy synthesis route, the polycrystalline nature is usually blamed for causing particle cracks and eventual capacity fade.

Recent research has indicated that single-crystal-based cathodes may be advantageous over polycrystalline counterparts in suppressing particle crack formation. However, this study suggests that using additive engineering can also effectively address the cracking issue in polycrystalline materials.

“Our work is saying that polycrystalline materials cannot be excluded from consideration, especially because they are easier to make, which can be translated into a lower cost.” Hu said.

Tan added, “Our strategy uses a very small amount of additive to achieve such great improvement of the electrochemical performance. Practically speaking, this could be a low-cost and easy-to-adopt solution.”

Looking ahead, the researchers want to test the additive under more challenging conditions to explore whether the cathode materials can withstand even more cycles for practical battery use.

To understand how the additive decomposes and protects the cathode surface, the researchers carried out a series of synchrotron experiments, Tan said.

Four beamlines at the National Synchrotron Light Source-II (NSLS-II), a DOE Office of Science user facility at Brookhaven that generates ultrabright x-rays for studying material properties at the atomic scale, played different roles in the research.

They used the Submicron Resolution X-ray Spectroscopy (SRX) beamline to study the effectiveness of the new interphase in suppressing transition metal dissolution by mapping how much of the transition metal was deposited on the anode surface. These experiments revealed that the cathode-electrolyte-interphase significantly prevented transition metals from migrating to the anode when the additive was in play.

Researchers also used the In Situ and Operando Soft X-ray Spectroscopy (IOS) beamline to characterize the cathode surface when the additive is introduced and enables formation of a robust interphase.

And they used the X-ray Powder Diffraction (XPD) beamline to look at the crystal structure of the cathode to see if it changed over multiple cycles.

In addition, the team coordinated across time zones with beamline scientists at the European Synchrotron Radiation Facility in Grenoble, France. Collaborators there used x-rays to look at the morphology and the chemistry of thousands of electrode particles, allowing scientists to visualize defects and energy density.

For imaging how the surface structure of the cathode evolved during cycling and for computational analysis, the researchers turned to the capabilities at Brookhaven Lab’s Center for Functional Nanomaterials. These imaging and computational studies helped the team identify the mechanism for how the additive works, Hu said.

“This project required a perfect combination of advanced techniques and advanced analysis across facilities to provide the crucial insight of this additive’s impact at various levels, from particle to electrode,” Hu said. “The analysis in the research offers statistically reliable, convincing evidence of how it works.”

In addition to Tan, Zulipiya Shadike, of Brookhaven Lab’s Chemistry Division, and Jizhou Li, a postdoctoral scholar at SLAC National Accelerator Laboratory, are also co-first authors on this research.

“With the great platform Battery 500 provides, we have a lot of expertise we can work with,” said Xiao-Qing Yang, leader of the Electrochemical Storage Research Group at Brookhaven. “This is really an amazing effort with many other institutions within and outside of the Battery500 consortium.”