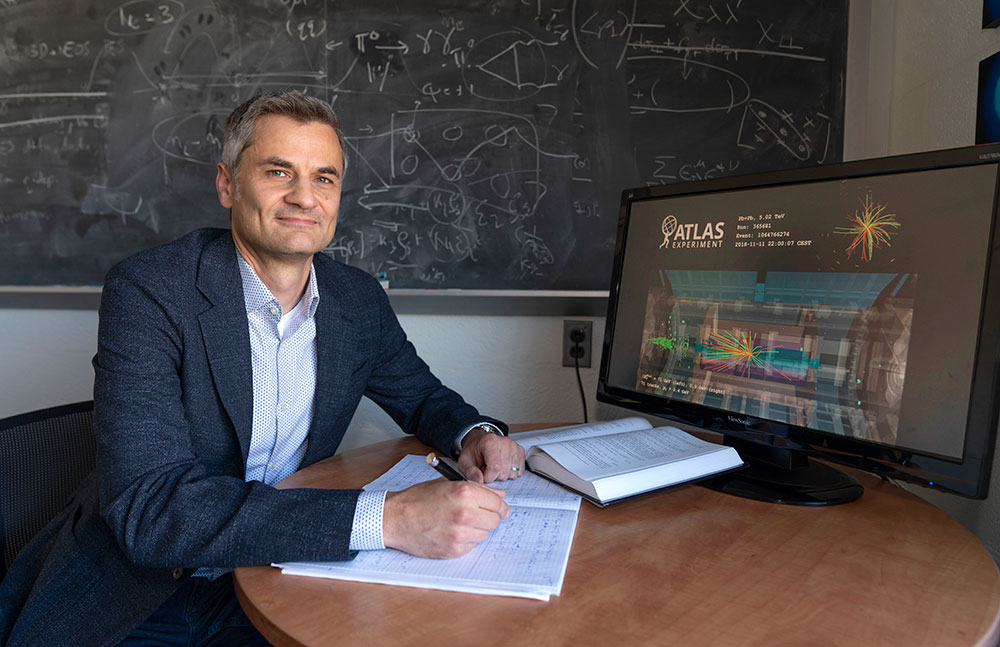 UPTON, NY—A new computational analysis by theorists at the U.S. Department of Energy’s Brookhaven National Laboratory and Wayne State University supports the idea that photons (a.k.a. particles of light) colliding with heavy ions can create a fluid of “strongly interacting” particles. In a paper just published in Physical Review Letters, they show that calculations describing such a system match up with data collected by the ATLAS detector at Europe’s Large Hadron Collider (LHC).

As the paper explains, the calculations are based on the hydrodynamic particle flow seen in head-on collisions of various types of ions at both the LHC and the Relativistic Heavy Ion Collider (RHIC), a DOE Office of Science user facility for nuclear physics research at Brookhaven Lab. With only modest changes, these calculations also describe flow patterns seen in near-miss collisions, where photons that form a cloud around the speeding ions collide with the ions in the opposite beam.

“The upshot is that, using the same framework we use to describe lead-lead and proton-lead collisions, we can describe the data of these ultra-peripheral collisions where we have a photon colliding with a lead nucleus,” said Brookhaven Lab theorist Bjoern Schenke, a coauthor of the paper. “That tells you there’s a possibility that, in these photon-ion collisions, we create a small dense strongly interacting medium that is well described by hydrodynamics—just like in the larger systems.”

Observations of particles flowing in characteristic ways have been key evidence that the larger collision systems (lead-lead and proton-lead collisions at the LHC; and gold-gold and proton-gold collisions at RHIC) create a nearly perfect fluid. The flow patterns were thought to stem from the enormous pressure gradients created by the large number of strongly interacting particles produced where the colliding ions overlap.

“By smashing these high-energy nuclei together we’re creating such high energy density—compressing the kinetic energy of these guys into such a small space—that this stuff essentially behaves like a fluid,” Schenke said.

Spherical particles (including protons and nuclei) colliding head on are expected to generate a uniform pressure gradient. But partially overlapping collisions generate an oblong, almond-shaped pressure gradient that pushes more high-energy particles out along the short axis than perpendicular to it.

This “elliptic flow” pattern was one of the earliest hints that particle collisions at RHIC could create a quark-gluon plasma, or QGP—a hot soup of the fundamental building blocks that make up the protons and neutrons of nuclei/ions. Scientists were at first surprised by the QGP’s liquid-like behavior. But they later established elliptic flow as a defining feature of QGP, and evidence that the quarks and gluons were still interacting strongly, even when free from confinement within individual protons and neutrons. Later observations of similar flow patterns in collisions of protons with large nuclei, intriguingly suggest that these proton-nucleus collision systems can also create tiny specks of quark-gluon soup.

“Our new paper is about pushing this to even further extremes, looking at collisions between photons and nuclei,” Schenke said.

It has long been known that that ultra-peripheral collisions could create photon-nucleus interactions, using the nuclei themselves as the source of the photons. That’s because charged particles accelerated to high energies, like the lead nuclei/ions accelerated at the LHC (and gold ions at RHIC), emit electromagnetic waves—particles of light. So, each accelerated lead ion at the LHC is essentially surrounded by a cloud of photons.

“When two of these ions pass each other very closely without colliding, you can think of one as emitting a photon, which then hits the lead ion going the other way,” Schenke said. “Those events happen a lot; it’s easier for the ions to barely miss than to precisely hit one another!”

“We had to set up special data collection techniques to pick out these unique collisions,” said Blair Seidlitz, a Columbia University physicist who helped set up the ATLAS trigger system for the analysis when he was a graduate student at the University of Colorado, Boulder. “After collecting enough data, we were surprised to find flow-like signals that were similar to those observed in lead-lead and proton-lead collisions, although they were a little smaller.”

Schenke and his collaborators set out to see whether their theoretical calculations could accurately describe the particle flow patterns.

They used the same hydrodynamic calculations that describe the behavior of particles produced in lead-lead and proton-lead collision systems. But they made a few adjustments to account for the “projectile” striking the lead nucleus changing from a proton to a photon.

According to the laws of physics (specifically, quantum electrodynamics), a photon can undergo quantum fluctuations to become another particle with the same quantum numbers. A rho meson, a particle made of a particular combination of a quark and antiquark held together by gluons, is one of the most likely results of those photon fluctuations.

If you think back to the proton—made of three quarks—this two-quark rho particle is just a step down the complexity ladder.

The calculations also had to account for the big difference in energy in these photon-nucleus collision systems, compared to proton-lead and especially lead-lead.

“The emitted photon that’s colliding with the lead won’t carry the entire momentum of the lead nucleus it came from, but only a tiny fraction of that. So, the collision energy will be much lower,” Schenke said.

That energy difference turned out to be even more important than the change of projectile.

In the most energetic lead-lead or gold-gold heavy ion collisions, the pattern of particles emerging in the plane transverse to the colliding beams generally persists no matter how far you look from the collision point along the beamline (in the longitudinal direction). But when Schenke and collaborators modeled the patterns of particles expected to emerge from lower-energy photon-lead collisions, it became apparent that including the 3D details of the longitudinal direction made a difference. The model showed that the geometry of the particle distributions changes rapidly with increasing longitudinal distance; the particles become “decorrelated.”

“The particles see different pressure gradients depending on their longitudinal position,” Schenke explained.

“So, for these low energy photon-lead collisions, it is important to run a full 3D hydrodynamic model (which is more computationally demanding) because the particle distribution changes more rapidly as you go out in the longitudinal direction,” he said.

When the theorists compared their predictions using this lower-energy, full 3D, hydrodynamic model with the particle flow patterns observed in photon-lead collisions by the ATLAS detector, the data and theory matched up nicely, at least for the most obvious elliptic flow pattern, Schenke said.

Implications and the future

“From this result, it looks like it’s conceivable that, even in photon-heavy ion collisions, we have a strongly interacting fluid that responds to the initial collision geometry, as described by hydrodynamics,” Schenke said. “If the energies and temperatures are high enough," he added, "there will be a quark-gluon plasma."

“It’s conceivable that, in photon-heavy ion collisions, we have a strongly interacting fluid.”

Seidlitz, the ATLAS physicist, commented, “It was very interesting to see these results suggesting the formation of a small droplet of quark-gluon plasma, as well as how this theoretical analysis offers concrete explanations as to why the flow signatures are a bit smaller in photon-lead collisions.”

Additional data to be collected by ATLAS and other experiments at RHIC and the LHC over the next several years will enable more detailed analyses of particles flowing from photon-nucleus collisions. These analyses will help distinguish the hydrodynamic calculation from another possible explanation, in which the flow patterns are not a result of the system’s response to the initial geometry.

In the longer-term future, experiments at an Electron-Ion Collider (EIC), a facility planned to replace RHIC sometime in the next decade at Brookhaven Lab, could provide more definitive conclusions.