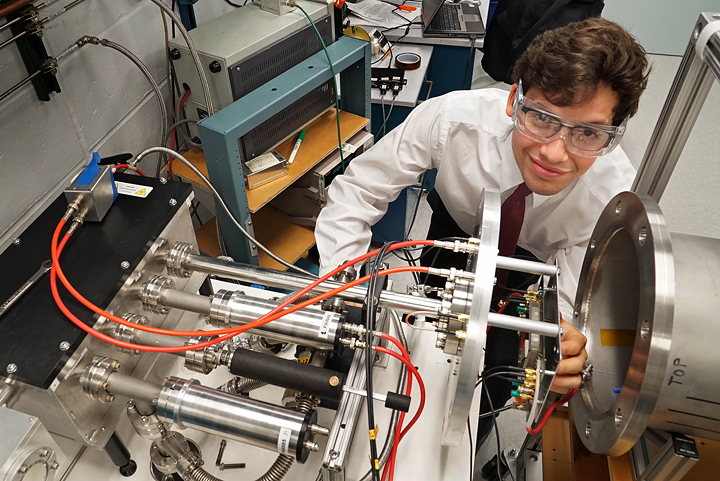 James Avilés Acosta controlled the testing process from start to finish—setting up and calibrating instruments, automating the experiments, and analyzing the results.

“I’ve always wanted to study physics, but I never thought I’d be able to do it here,” said Jaime Avilés Acosta, who recently completed a summer internship in the physics department at the U.S. Department of Energy’s (DOE) Brookhaven National Laboratory.

“It’s been a real privilege to work here; I’m not sure I want to work anywhere else now,” Avilés Acosta said.

Supported by DOE’s Minority Serving Institutions Partnership Program, which provides science and engineering experiences for minority students, the Indiana University graduate spent ten weeks collaborating with mentor Mickey Chiu, a physicist in the sPHENIX collaboration at Brookhaven’s Relativistic Heavy Ion Collider (RHIC). Avilés Acosta tested new materials for a detector subsystem that will potentially reduce the cost and improve the particle-detecting ability of the proposed future sPHENIX experiment. The technology could also have applications outside of physics research, from detecting radioactive materials to improved night-vision goggles.

Physicists are designing detector components to collect detailed information about the shower of particles produced by collisions at RHIC, a DOE Office of Science User facility for nuclear physics research. Thousands of particles of different varieties stream out from these collisions at nearly the speed of light and very close together. Detector systems have to be “ultra-fast” to ensure they can “see” each individual particle. Chiu tasked Avilés Acosta with testing new materials for a detector system they hope can tease out distinct signatures of two particles travelling only ten trillionths of a second apart, which will allow scientists to identify the particles by their time-of-flight.

“Particle identification would give sPHENIX even greater ability to complete our understanding of the quark-gluon plasma that is created at RHIC,” Chiu said.

The detector would be made up of three main parts, with the first being a “window” that produces ultra-violet (UV) light when a particle passes through. A photocathode then converts this light to an electronic signal, and finally a microchannel plate amplifies the signal. The more light produced and detected, the better the instrument can distinguish between particles moving close together. Avilés Acosta tested a new material for each of these parts, hoping to achieve a faster and more cost-effective detector. 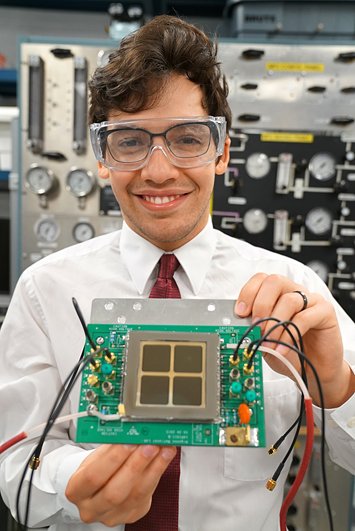 Jaime Avilés Acosta with detector components he tested that could one day be part of a proposed RHIC experiment known as sPHENIX.

He began by testing a new glass material for the window. Conventional windows absorb some of the UV light they produce, so the photocathode isn’t able to “see” all the light. If the new material absorbed little to no UV light, it might lead to clearer signals and a better detector.

Despite being new to the project, Avilés Acosta controlled the testing process from start to finish. He set up and calibrated instruments, automated experiments, and analyzed the results. He found that the new glass material outperformed all conventional windows, absorbing only ten percent of most UV light.

The student intern then looked at the other detector components—the photocathode and the microchannel plate. The new photocathode material absorbs UV light—especially high-energy UV light—better than the conventional material. So, Avilés Acosta expected the material to pick up more light produced by the window and give an overall stronger signal.

At the same time, he studied a new microchannel plate. This thin glass plate has thousands of tiny holes—each only 20 millionths of a meter across—that turn the few electrons produced by the photocathode into an avalanche. This converts a small electrical signal into something much larger and easier to read.

“The cost of manufacturing the old plates made these detectors extremely expensive,” Avilés Acosta said. But a recent collaboration between DOE’s Argonne National Laboratory and the University of Chicago developed a new way to make the plates more affordable.

Although the new cost-effective microchannel plate was developed for physics research, it has many potential applications outside the field. It can amplify very small electromagnetic signals—including the visible light detected by night-vision goggles or the gamma rays emitted by some radioactive materials.

“This is cutting-edge, fascinating science. It really blows my mind,” Avilés Acosta said. “The research I did here at Brookhaven has lit a fire in my heart to continue pursuing my passion.”