PubSci at the Parrish Merges Science, Art, and Music

Brookhaven Lab's science café and conversation series headed to the Parrish Art Museum for the second time; a scientist, artists, and composers discussed different ways to represent nanoscience data through visualization and sonification 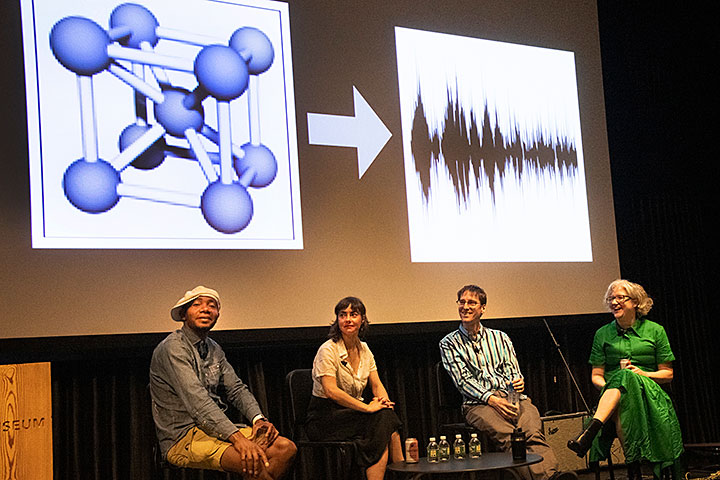 The sciences and the arts are often seen as polar opposites. But a conversation between a scientist, artists, and composers held at the Parrish Art Museum in Water Mill, NY, on the evening of Sept. 6 showed how these fields can be combined to create beautiful visuals and sounds based on real scientific data. The conversation was the second installment of PubSci at the Parrish, a spin-off of PubSci—the science café and conversation series of the U.S. Department of Energy’s (DOE) Brookhaven National Laboratory.

PubSci is typically hosted in local bars to provide an informal and casual setting for the public to engage in discussions with Brookhaven Lab scientists and their collaborators. But last September, for the first time, PubSci was brought to the Parrish Art Museum for a program titled “Illumination: Revealing the Secret Chemistry of Oil Paintings.” At that event, scientists and artists explored how ultrabright x-ray light from Brookhaven’s National Synchrotron Light Source II (NSLS-II) illuminated the chemical changes in a microscopic sample of a 15th-century oil painting, Jan Van Eyck’s The Crucifixion, that led to the artwork’s degradation. 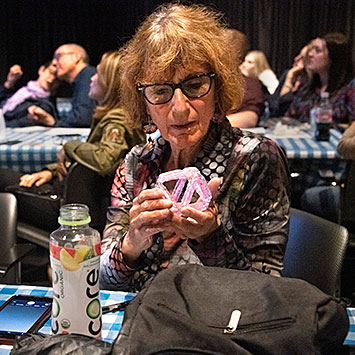 An attendee holds a DNA octahedron, one of the 3-D printed nanosculptures that is part of the Glass Menagerie collection made by Melissa Clarke using nanoscience data collected at Brookhaven Lab.

The event was inspired by an ongoing collaboration between Clarke, Schedel, and Yager. Using nanoscience data that Yager and other scientists generated at the Center for Functional Nanomaterials (CFN) and NSLS-II—both DOE Office of Science User Facilities at Brookhaven—the trio created novel representations of 3-D nanostructures in the form of a sculpture collection (“Glass Menagerie”) and sonifications incorporated into a virtual reality (VR) experience. 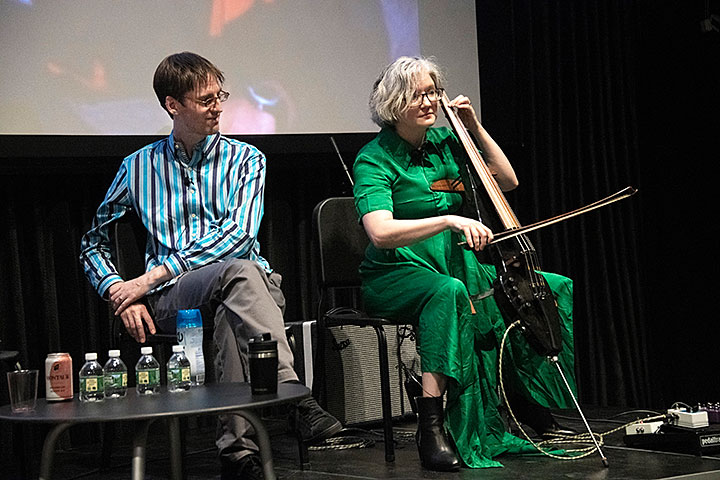 The evening began with Margaret Schedel playing a cello composition as an introduction to sonification.

To kick off the event, Schedel played a cello composition based on the digits in the mathematical constant pi. Yager followed this live performance with an introduction to nanoscience, or the study of materials at ultrasmall scales. Attendees heard sonifications of different nanomaterials, including a metal alloy and carbon nanotubes in a polymer. Clarke then described her process for transforming nanoscience visualizations into 3-D printed glass-like nanosculptures such as a DNA octahedron and nanostar. Several of these hand-sized nanosculptures were on display and passed around to audience members. To give the audience a feel of the VR component of the project, the panelists played a video recreating the experience. Throughout the evening, Miller shared his perspectives on how science and mathematics provide inspiration for his music. The program concluded with Yager revealing a “surprise” nanoscience dataset that Clarke, Miller, and Schedel had never seen before and asking them to explain how they would re-represent the data.

A video capturing the virtual reality experience with Glass Menagerie.

Glass Menagerie will be display on Governors Island in New York Harbor from Sept. 14 through Oct. 27. Visitors will be able to try out the VR component. For more information, click here.

Since 2014, PubSci has been offering the public a chance to see a more casual side of the cutting-edge research happening every day at Brookhaven Lab, and chat with scientists over a drink. The series hops around Long Island, covering different topics, from the Big Bang to tomorrow’s technologies. Stay tuned for an announcement about the next event!

Inspired by the natural setting an artistic life of Long Island’s East End, the Parrish Art Museum illuminates the creative process and how art and artists transform our experiences and understanding of the world and how we live in it. The Museum fosters connections among individuals, art, and artists through care and interpretation of the collection, presentation of exhibitions, publications, educational initiatives, programs, and artists-in-residence. The Parrish is a center for cultural engagement, an inspiration and destination for the region, the nation, and the world.