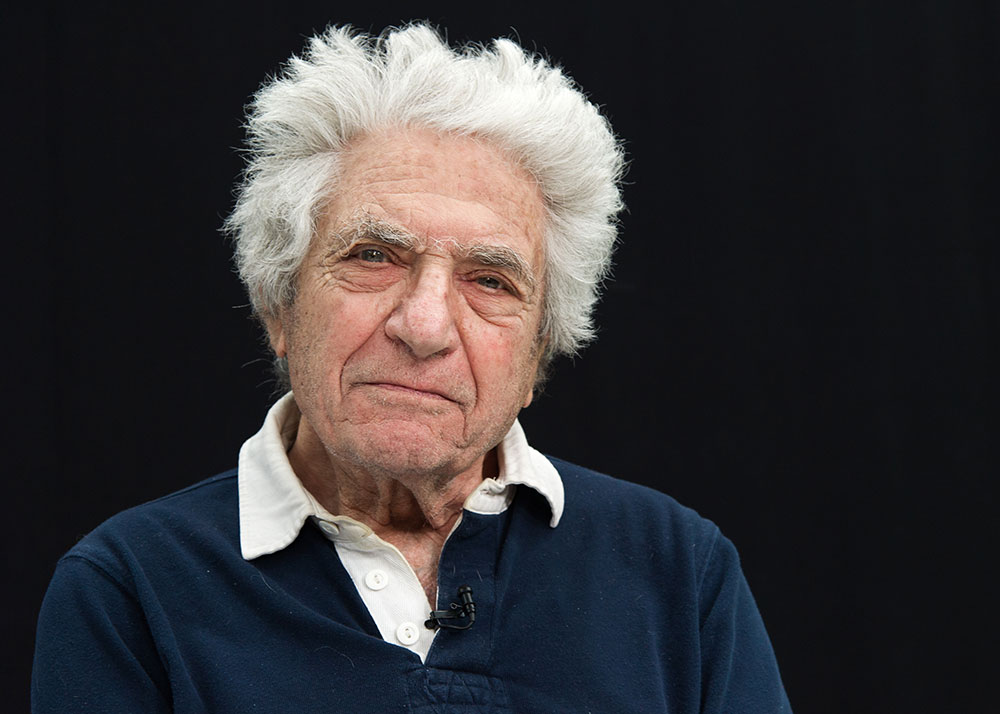 Jack Steinberger, who with Leon Lederman and Melvin Schwartz was awarded the 1988 Nobel Prize in physics for their 1962 discovery of the muon neutrino, died on Saturday, December 12, 2020, at his home in Geneva. He was 99.

“Jack Steinberger was a remarkable man who played a key role in one of the most impactful discoveries in particle physics of the 20th century,” said Doon Gibbs, Director of the U.S. Department of Energy’s Brookhaven National Laboratory, which is home to the Alternating Gradient Synchrotron (AGS) used in the prize-winning research. “It made use of a powerful, then-brand-new accelerator to address a frontier question—and is a signature experiment from Brookhaven’s early days. We will miss him and send our sincere condolences to his family.”

At the time of the discovery, physicists knew about only one type of neutrino, produced in the decay of beta particles (now known as the electron neutrino). Steinberger, Schwartz, and Lederman—professors at Columbia University—wondered whether there might be more types of these ghostlike particles that pass through everything. The AGS, then the most powerful accelerator in the world, was the perfect place for the search. 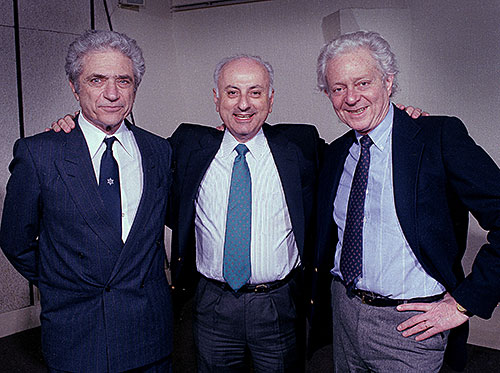 Jack Steinberger, Melvin Schwartz, and Leon Lederman at a celebration of their Nobel Prize at Brookhaven Lab in 1988.

The experiment used a beam of the AGS's energetic protons to produce particles called pi mesons. These pi mesons traveled 70 feet toward a 5,000-ton steel wall made of old battleship plates. On the way, the mesons decayed into other types of particles, namely muons and neutrinos. But only the neutrinos could pass through the wall into a neon-filled detector called a spark chamber. There, the products of neutrino interactions with aluminum plates produced spark trails that could be detected and photographed. The scientists set up the detector so they’d be able to distinguish whether the spark trails were produced by muons or electrons. Only muons were detected—proving the existence of a second type of neutrino, the muon neutrino.

As noted in the press release announcing the Nobel Prize, the experiment “led to discoveries that opened entirely new opportunities for research into the innermost structure and dynamics of matter.” The existence of a second kind of neutrino and its association with the muon—mirroring the electron neutrino’s association with the electron—laid the foundation for the now-accepted paired groupings of elementary particles described by the Standard Model of particle physics.

No less significant, the experiment's use of the first-ever neutrino beam paved the way for scientists to use these particles in research at the AGS and around the world.

Nicholas Samios, who served as director of Brookhaven Lab from 1982 to 1997, recalled some of the early physics activities: “Jack Steinberger’s group at Columbia (including me and Mel Schwartz when we were Ph.D. candidates) was actively engaged in performing experiments at Brookhaven’s Cosmotron and AGS throughout the 1950s, 60s, and early 70s. His great strength in both theory and experiment led to his extraordinary contributions to physics, which, in addition to the Nobel-Prize-winning work, included investigations in both the strong and weak interaction domains, the discovery of the sigma zero hyperon particle, and the elucidation of the production and properties of many of the newly discovered particles and their decays. He was one of the pre-eminent physicists of our era.”

Brookhaven Lab physicist Elizabeth Worcester, one of two physics coordinators for a new international neutrino experiment, the Deep Underground Neutrino Experiment (DUNE), said, “Jack Steinberger has always loomed large in my career. As a graduate student at University of Chicago, I heard many stories about his brilliance, and so much of my work today is based on his discoveries. While the Nobel-Prize winning experiment detected only 51 muon neutrinos, DUNE will detect tens of thousands of these particles and make use of Steinberger's discovery that neutrinos are paired with their charged partners to observe and identify all three types of neutrino in our detector. This experiment may help us discover how neutrinos are connected to fundamental questions about the origins of our Universe.”

Hans Jakob Steinberger was born on May 25, 1921, in Bavaria, Germany. In 1934, during the rise of the Nazi regime, he and his older brother came to the U.S. with the help of American Jewish charities. He graduated with a Bachelor’s degree in physics from the University of Chicago in 1942, and after serving in the Signal Corps at MIT while in the Army, returned to earn his Ph.D. in 1948. After two years at the University of California, Berkeley, he joined the faculty of Columbia in 1950, and then moved to CERN, the European laboratory for particle physics, in 1968. He was awarded the U. S. Medal of Science in 1988, the same year as his Nobel Prize.

The muon neutrino discovery is one of 7 Nobel Prizes awarded for research done at or by scientists associated with Brookhaven Lab.