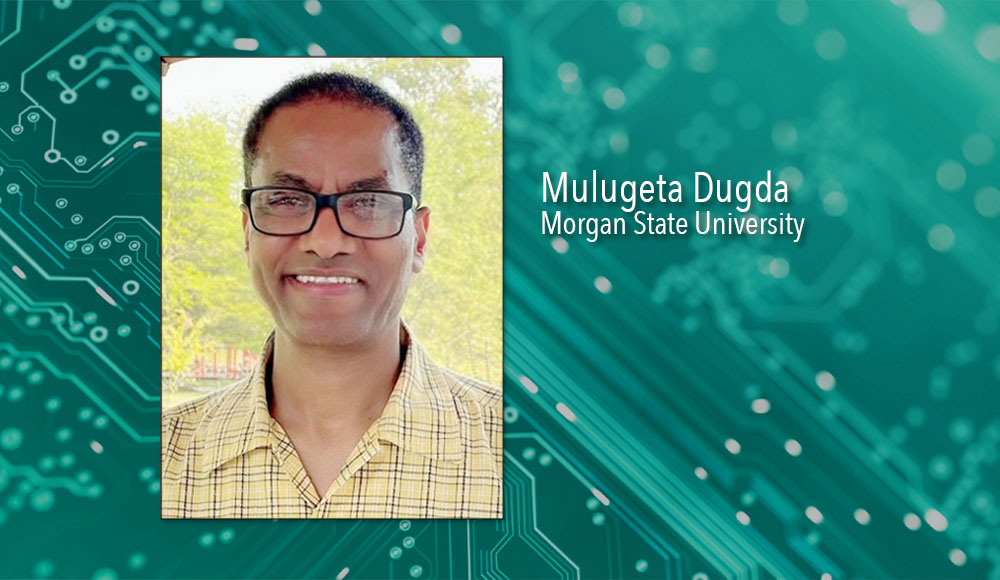 As the composition of research laboratories continues more and more to reflect the diversity of the country, the Department of Energy’s Brookhaven National Laboratory has long worked on keeping its doors open and opportunities available to the variety of STEM (science, technology, engineering, and mathematics)-interested students/interns and the mentors who inspire them.

For Mulugeta T. Dugda, currently a lecturer at Morgan State University, a historically black public university in Baltimore, Maryland, “diverse” can aptly characterize his scholarly interests—he earned doctorates in seismology (Pennsylvania State University) and electrical engineering (North Carolina A&T State University)—and his current work involves areas such as big data analytics, including capture and storage, or “provenance extraction.” A colleague’s referral initiated his first visit to Brookhaven Lab in 2017. Since then, Dugda has cultivated a lasting relationship with the Lab as both intern and mentor that he says has enhanced his research expertise and expects to continue as he introduces more students to the benefits of collaborating with national laboratories.

Can you share some of your academic and research history and how it connects to your work in data analytics and big data or other research areas?

MTD: I am involved in various areas, including big data analytics, provenance, machine learning, signal processing, cybersecurity, and experimental centric pedagogy. Presently, I teach electrical engineering courses in the Department of Electrical and Computer Engineering at Morgan State University. In all of my studies, particularly in electrical engineering, I developed a background in machine learning and data analytics as I had interest in these areas. When I was a graduate student, I took several courses directly related to machine learning, such as neural networks; pattern recognition; data fusion; and Python, R, and other programming languages and applications. I also teach machine learning and data analytics-related graduate and undergraduate courses, such as pattern recognition and computer programming in C, C++, and Python in addition to signal processing and communication courses. 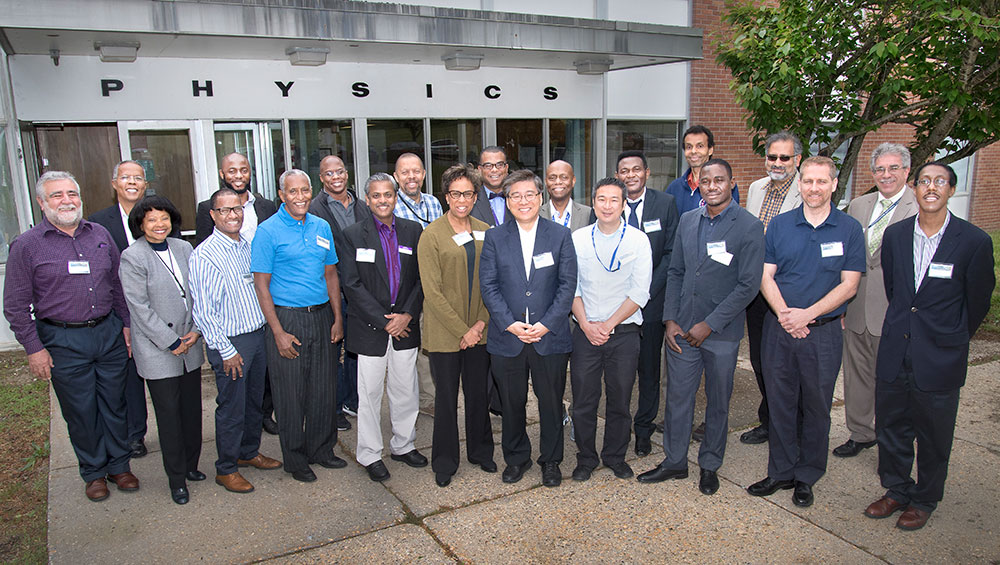 Mulugeta T. Dugda (third from the left in the front row) is featured with other scientists who attended the EIC Conference that first brought him to Brookhaven Lab. Since then, Dugda has returned to the Lab, collaborating with scientists in the Computational Science Initiative as an intern and now a mentor leading his own research.

How did you first hear about research opportunities within DOE national laboratories?

MTD: My first visit to Brookhaven was four years ago, in 2017. I first learned about the opportunities at national laboratories, especially about Brookhaven, from Dereje Seifu, a professor in the Department of Physics at Morgan State University. He was the first person to inform me about the Electron-Ion Collider (EIC) Conference and other opportunities at the Lab. After registering for the EIC Conference, Dereje and I visited Brookhaven. Many colleagues from other universities participated in that conference as well. I have an interest and background in physics, technology, big data, data analytics, and other research related to the EIC project. Four years after the EIC conference, I learned that Brookhaven was awarded this huge one-of-a-kind physics research facility project. Congratulations! That is a great achievement.

I visited the Lab one more time in the fall of 2017 to participate in the Workforce Development and Science Education Program, called WDTS Champions Outreach Program. During that program, I had the chance to visit different scientific divisions, including the Computational Science Initiative (CSI), and I learned more about CSI and scientists and engineers working there from CSI Deputy Director Francis Alexander. Since then, I have developed very good relationships with the scientists at CSI. I had a chance to visit CSI with my students during two summers before COVID-19. In 2018, my students Mohammed Indris, Behiru Shifa, and I were supported by National Science Foundation (NSF) funding from the Louis Stokes Alliances for Minority Participation (LSAMP) program. In 2019, my student Ahmed Samsudeen and I were supported under the DOE’s Visiting Faculty Program.

Awarded in August 2021, Dugda’s NSF project is the product of many years of cultivation, both independent and as part of a collaboration that started when he brought his first students to Brookhaven Lab via the LSAMP program.

Once underway, the project will involve development of a computational framework using data analytics and machine learning techniques for automatic detection of clandestine underground nuclear explosions, aftershock earthquake predictions, and big data crustal modeling. It will build on the provenance and related concepts Dugda learned during his time at Brookhaven in summer 2018, applied to big seismic data analysis. He also expects to expand his collaboration with CSI scientists, including Line Pouchard, Yuewei Lin, and others. Importantly, he plans to continue capitalizing on the many internship possibilities afforded by Brookhaven and the other national laboratories in the DOE complex.

“I believe our research and collaboration will deliver analytical and computational techniques that have much to offer to the field of solid-Earth geophysics, especially seismology, which will be an exciting aspect,” Dugda added. “Moreover, it will impart research-enriched learning experiences to STEM undergraduate and graduate students through educational activities at Morgan State University and summer research internships at Brookhaven National Laboratory.”

How has exploring your research within a national laboratory setting influenced or impacted your work?

MTD: As a result of my research experience at Brookhaven, I believe my understanding of complex problems has improved, especially how to approach solving such problems. I developed better scientific reasoning ability and critical thinking skills. Moreover, I believe my mastery of some research topics has been enhanced. My skills in applying Python programming language to solve data analytics and provenance problems has been enriched.

One benefit to working at CSI in the scientific areas of provenance and data analytics is that the research topic is ensured to be contemporary and at the cutting edge. Getting great and valuable advice from CSI’s scientists is another benefit. For instance, I have no doubt that the advice I received from Line Pouchard while she was my mentor at CSI in 2018 played an instrumental role in my NSF proposal, “A Data-Driven Computational Framework for Seismic Detection, Modeling and Prediction,” being recommended for funding (see sidebar, “Shaking up Big Data Analytics”). The major ideas of the proposal were initiated and developed during that 2018 summer internship at Brookhaven with Line’s encouragement, guidance, and support. In fact, the Letter of Intent was submitted to NSF on July 24, 2018, while I still was at Brookhaven.

I would like to express my heartfelt gratitude to BNL’s Office of Educational Programs and CSI, especially Noel Blackburn, Line Pouchard, Shantenu Jha, Francis Alexander, Shinjae Yoo, Yuewei Lin, and Anthony DeGennaro for supporting my summer internships and believing in my work. I also want to thank CSI, Brookhaven, and DOE at large for their contribution in developing my research capability. I also am thankful to NSF; LSAMP; and Morgan State University, especially Cleo Hughes-Darden, Clarence M. Lee, Craig Scott, and Dereje Seifu, for their support. I could list so many other helpful people in my research at BNL!

How do you encourage your students to pursue opportunities to work with national laboratories or to collaborate with scientists beyond their “home” institution?

MTD: I encourage students to apply for internships, especially for the DOE’s Science Undergraduate Laboratory Internships (SULI) and other internship programs and opportunities. After identifying qualified students who can apply for the Lab’s internships, I inform, advise, and encourage my students to come to the Lab as a team. I tell my students that through their collaboration in national laboratories, they will gain new skills, techniques, and knowledge from the world’s best scientists and engineers. I also inform them that such an opportunity could even be a turning point in their lives, to be involved and be successful in cutting-edge research. In addition, they can put those accomplishments on their CV [curriculum vitae] for their graduate studies or job applications.

What is the one takeaway that you would want someone to have about working with DOE national labs?

MTD: Collaboration with a scientist or scientists from a national laboratory, especially with Brookhaven Lab, is a great opportunity that many faculty in U.S. institutions should seriously consider for their success in research.