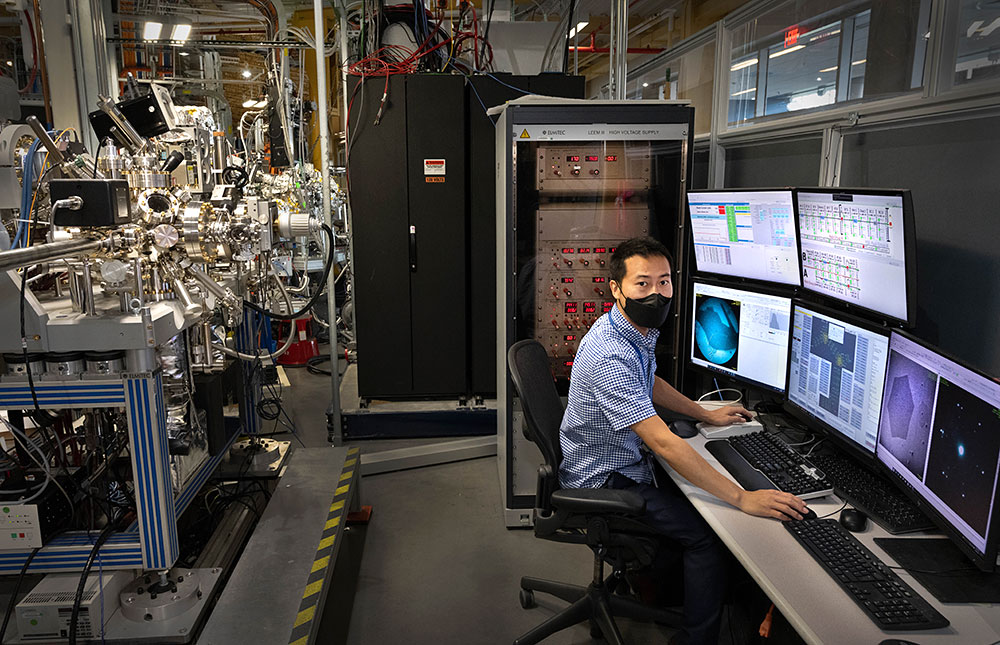 In 2010, University of Manchester researchers won the Nobel Prize in Physics for their 2004 discovery of graphene—a form of carbon only one atom thick, about one-millionth the thickness of a strand of hair. The accidental discovery of the world’s first two-dimensional (2D) material was based on a surprisingly simple method involving a common office supply: Scotch tape. With the sticky tape, the research group had been peeling off the topmost layer of graphite—the main component of pencils—to expose a clean surface for calibrating a microscope used to image surfaces at the atomic scale. One day, they noticed black residue on used tape in a trash bin and decided to investigate further. After repeated peeling, they eventually isolated a single layer of carbon atoms in crystalline form. Graphene proved to have remarkable electrical, mechanical, and chemical properties, including high electrical conductivity, durability, and transparency.

­At the time, Zhongwei Dai had just earned his bachelor’s in physics and was about to start his PhD program in condensed matter physics and materials science at the University of New Hampshire (UNH). As someone who grew up observing the world around him and trying to understand how things work—such as how a flame in a fire gets its shape—Dai knew he wanted to study the physics of materials. When he heard the graphene discovery story, he decided to become a 2D quantum materials scientist.

“I was amazed by how they found a new material with the most basic tools instead of the expensive, fancy equipment scientific research typically requires,” said Dai, who, for the past three years, has been a postdoctoral researcher in the Interface Science and Catalysis Group of the Center for Functional Nanomaterials (CFN)—a U.S. Department of Energy (DOE) Office of Science User Facility at Brookhaven National Laboratory. “I became excited about the other 2D materials out there waiting to be discovered and explored. These materials have the potential to revolutionize our world.”

From user to collaborator to postdoc

Dai’s first interaction with the CFN was as a user while he was completing his PhD work. For his research, he used the CFN x-ray photoemission electron microscopy/low-energy electron microscopy (XPEEM/LEEM) endstation at the Electron Spectro-Microscopy beamline at the National Synchrotron Light Source II (NSLS-II). Here, he performed dynamical low-energy electron diffraction (LEED) to study the different surface atomic structures of various 2D crystals, including graphene; transition metal dichalcogenides (TMDs) such as molybdenum diselenide and tungsten ditelluride; and transition metal tri-halides like ruhenium trichloride. 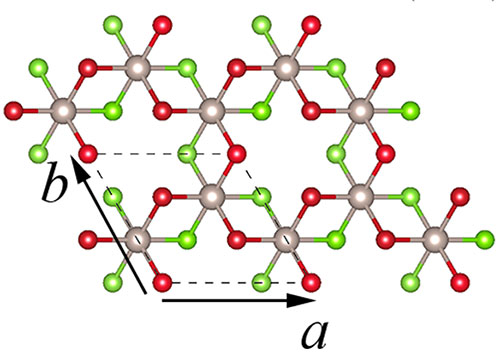 A top view of the atomic structure of an individual chlorine (red)-ruthenium (gray), chlorine (green) sandwich layer. Research published in 2D Materials 7, no. 3 (2020)

In dynamical LEED, the energy of the electrons bombarding the sample is tuned and the intensity of the electrons scattered back is recorded, producing an intensity vs voltage (IV) spectrum. Dai co-wrote software to analyze the data produced by the XPEEM/LEEM endstation. He compared the experimental spectrum with a calculated spectrum based on an atomic model of how atoms may be arranged on the surface. Through an iterative process, he refined the atomic model to see which atomic arrangement produced a simulated spectrum most closely matching the experimental one. Dai discovered each of the 2D crystals had a slightly different surface structure compared to their “parent” 3D crystals. Dai also modernized a LEED-IV calculation package to more quickly provide crystal information; this program was installed on the CFN computing cluster.

After getting to know some of the CFN staff—including materials scientist Jerzy Sadowksi, who oversees the XPEEM/LEEM endstation—Dai began collaborating with them on 2D materials research. For example, they determined the surface structure of ruthenium trichloride, a magnetic material of interest for quantum applications.

As Dai prepared to graduate from UNH, he applied to an open CFN postdoc position, which would be supervised by Sadowski. He was selected, joining the CFN in October 2018.

Tools of the trade

As a CFN postdoc, Dai has been studying the fundamental behavior of electrons and light in different 2D quantum materials—including graphene, TMDs, and hexagonal boron nitride (an insulator)—in hopes of identifying promising candidates for quantum information science (QIS) applications.

“Because of their reduced dimensionality, 2D materials have different and peculiar properties that may be useful for making next-generation electronic or optoelectronic devices,” said Dai. 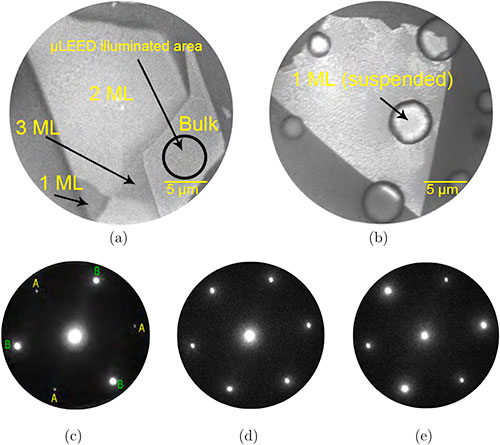 LEEM (a and b) was used to locate the sample area of interest, followed by dynamical LEED acquired at different electron energies (c, d, and e), to investigate the crystalline structure of molybdenum disulfide on a silicon substrate. The first LEEM image (a) shows bulk (more than 100 layers thick), monolayer (1 ML), bilayer (2 ML), and trilayer (3 ML) molybdenum disulfide. The second LEEM image (b) shows areas where circular holes were drilled and covered with 1 ML of molybdenum sulfide; without a substrate underneath, the 1 ML is "suspended." The dynamical LEED patterns are of bulk molybdenum disulfide, with c and e clearly displaying three-fold symmetry. Research published in Surface Science, 660 (2017).

To study these materials, Dai primarily employs three complementary surface-sensitive techniques: Raman spectroscopy, LEEM, and LEED. While LEEM and LEED shoot electrons at a sample, Raman spectroscopy shines light onto a sample. Based on how the light gets scatterd back, Raman spectra provide distinct chemical fingerprints of materials and their crystal phases and defects. The Raman spectrometer Dai uses is attached to a laser-based optical microscope. Part of the robotic Quantum Material Press (QPress) under development at the CFN, this confocal Raman microscope can probe light-matter interactions at targeted sample areas.

"By combining imaging and spectroscopy, the microscope gives us detailed information about how chemical components are distributed and how crystallinity varies in the material,” said Dai. “I initially check the crystallinity of 2D crystals through confocal Raman spectroscopy because it’s fast—it operates outside of a vacuum chamber, so I can easily go to different spots on the sample and collect a spectrum to see whether those areas are good crystals or not.”

Next, Dai takes photos of the crystal surface with LEEM to determine its cleanliness. He ultimately checks the crystallinity with LEED, which is sensitive to a material’s periodic structure, or how the atoms are regularly arranged.

Another tool Dai uses is a scattering-type scanning near-field optical microscope. This microscope measures the near-field optical signals between a scanning probe tip with a laser beam shone onto it and a material surface. A 2D image of the surface is generated based on these measurements, with the image contrast capturing local interactions between light and atoms on the surface. In this way, Dai can study surface quantum phenomena.

A quest for useful 2D materials

Recently, Dai, Sadowski, and collaborators from the CFN and University of Pennsylvania studied bilayer graphene in which one of the two layers was rotated by 30 degrees relative to the other. As they reported in Physical Review Letters, they found the distance between the two layers increased in this twisted configuration relative to a stacked one, where the layers are stacked directly on top of each other. This increased interlayer spacing for electrons to move could lead to devices with interesting and unexpected properties. 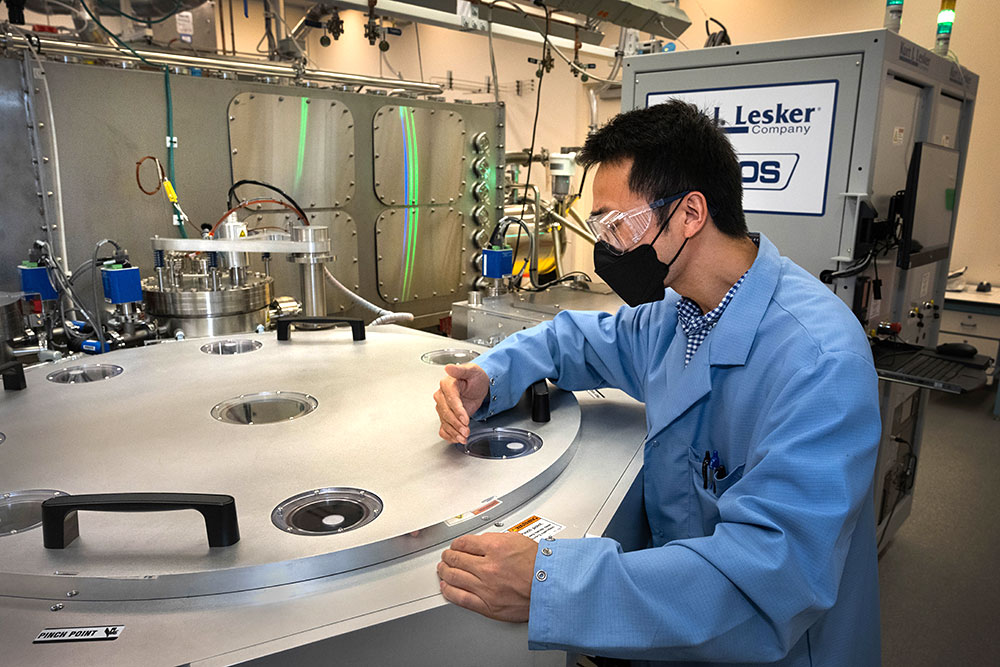 Dai looks through one of the windows into the central QPress chamber, which contains the robot for routing samples. The smaller white dots appearing on each of these windows are part of a self-check alignment system to determine whether the robot arm is at that location.

Dai has also been building and studying quantum heterostructures, refering to individual 2D materials stacked together to form entirey new materials with never-before-seen properties. The CFN QPress is designed to synthesize and characterize these composite materials. On the synthesis side, two challenges are determining which adhesive tape is the best to peel atomic layers from parent crystals and how to make the 2D heterostructure interfaces interactive.

“The QPress uses sticky polymers for exfoliation, and residue from the polymers may stay on the 2D crystals and influence the interface interactions,” explained Dai. “Also, if contaminants like water and other small molecules get sandwiched in between the materials, the interfacial interactions will be impaired or disappear. LEEM can detect these contaminants.” 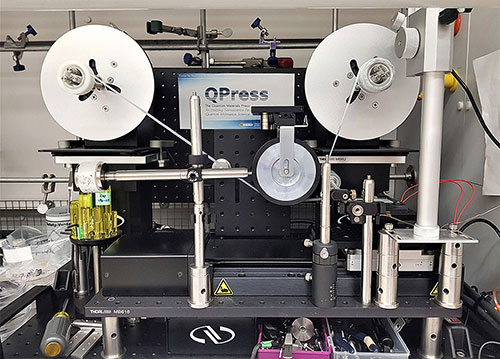 “When you put different 2D materials together, the possibilities are endless,” said Dai.

“At this interface, the electrons are under the influence of both a conducting and nonconducting material,” said Dai. “It’s a peculiar spot where I suspect we can gain meaningful insights about how electrons move, not only in this system but also in others.”

With Dai’s postdoc at the CFN coming to an end, he is appreciative of his experience.

“The world-class faciliites and expert staff scientists at the CFN gave me an opportunity to advance my research that nowhere else in the world can provide,” said Dai. “I especially benefitted from working with not only my research group but also the other groups across the CFN—Soft and Bio Nanomaterials for photoluminesence spectroscopy to study the electronic structure of my materials, Electronic Nanomaterials for making insulating QPress substrates conductive through thin films of titanium oxide for electron-based techniques, Electron Microscopy for imaging these films, and Theory and Computation for providing theoretical insights to help me understand my experimental results. Without CFN Director Chuck Black encouraging this synergy, I don’t think my research would have been possible. I’m also grateful for all the help I received from support staff.”

Next, Dai will seek a faculty position in which he can continue his research on 2D quantum materials, with an eye toward both fundamental processes and real-world applications.

“I want to collaborate with the device community to make prototype devices with the 2D heterostructure materials I study, completing the feedback loop in the search for new quantum technologies.”