Imaging the Chemical Fingerprints of Molecules

Combining experiment, theory, and simulation, scientists from around the world discovered basic chemical properties of molecules are imprinted in atomic force microscope images—a step in the ongoing quest to identify unknown molecules based on such images 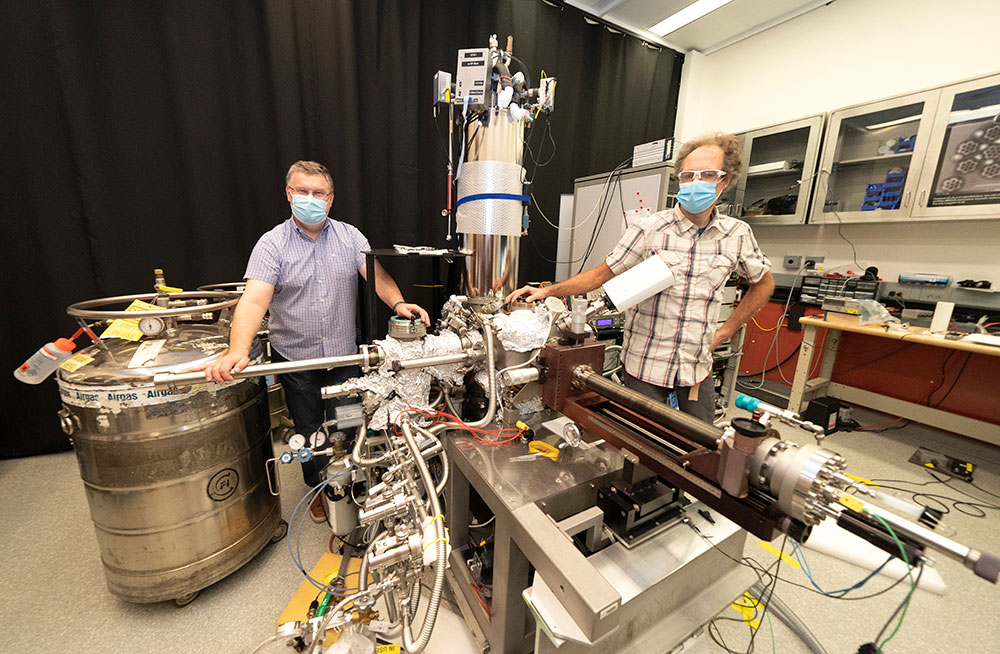 Jurek Sadowski (left) and Percy Zahl with the high-resolution atomic force microscope at the Center for Functional Nanomaterials.

Flip through any chemistry textbook and you’ll see drawings of the chemical structure of molecules—where individual atoms are arranged in space and how they’re chemically bonded to each other. For decades, chemists could only indirectly determine chemical structures based on the response generated when samples interacted with x-rays or particles of light. For the special case of molecules on a surface, atomic force microscopy (AFM), invented in the 1980s, provided direct images of molecules and the patterns they form when assembling into two-dimensional (2D) arrays. In 2009, significant advances in high-resolution AFM (HR-AFM) allowed chemists for the first time to directly image the chemical structure of a single molecule with sufficient detail to distinguish different types of bonding inside the molecule.

AFM “feels” the forces between a sharp probe tip and surface atoms or molecules. The tip scans over a sample surface, left to right and top to bottom, at a height of less than one billionth of a meter (nanometer), recording the force at each position. A computer combines these measurements to generate a force map, resulting in a snapshot of the surface. Found in laboratories worldwide, AFMs are workhorse instruments, with diverse applications in science and engineering. 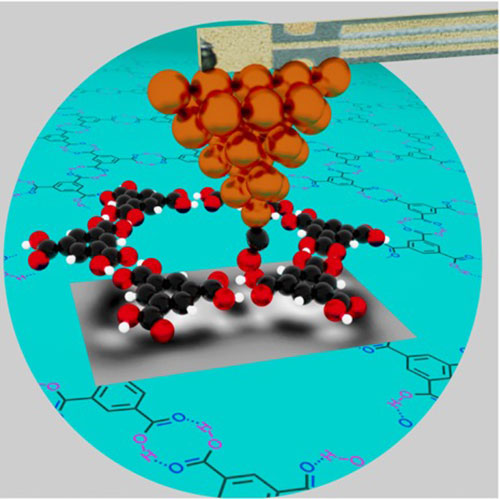 An illustration of a high-resolution atomic force microscope probing the chemical properties of hydrogen-bonded trimesic acid (TMA) networks (overlaid on teal circle) on a copper surface. Key: copper atoms on metal tip apex (orange), carbon atoms (black), oxygen atoms (red), and hydrogen atoms (white). The single carbon monoxide (CO) molecule at the end of the tip apex, with the carbon attached to copper, is a bit bent in response to the repulsive forces from the nearby oxygen of the TMA molecule.

Only a few HR-AFMs exist in the United States. One is located at the Center for Functional Nanomaterials (CFN)—a U.S. Department of Energy (DOE) Office of Science User Facility at Brookhaven National Laboratory. For several years, physicist Percy Zahl of the CFN Interface Science and Catalysis Group has been upgrading and customizing the CFN HR-AFM hardware and software, making it easier to operate and acquire images. As highly specialized instruments, HR-AFMs require expertise to use. They function at very low temperature (just above that required to liquify helium). Moreover, HR imaging depends on catching a single carbon monoxide molecule on the end of the tip.

As challenging as preparing and operating the instrument for experiments can be, seeing what molecules look like is only the start. Next, the images need to be analyzed and interpreted. In other words, how do image features correlate with the chemical properties of molecules?

Together with theorists from the CFN and universities in Spain and Switzerland, Zahl asked this very question for hydrogen-bonded networks of trimesic acid (TMA) molecules on a copper surface. Zahl began imaging these porous networks—made of carbon, hydrogen, and oxygen—a few years ago. He was interested in their potential to confine atoms or molecules capable of hosting electron spin states for quantum information science (QIS) applications. However, with experiment and basic simulations alone, he couldn’t explain their fundamental structure in full detail.

“I suspected the strong polarity (regions of charge) of the TMA molecules was behind what I was seeing in the AFM images,” said Zahl. “But I needed more precise calculations to be sure.”

In AFM, the total force between the probe tip and molecule is measured. However, for a precise match between experiment and simulation, each individual force at play must be accounted for. Basic models can simulate short-range forces for simple nonpolar molecules, where electrical charges are evenly distributed. But for chemically rich structures as found in polar molecules like trimesic acid, electrostatic forces (originating from the electronic charge distribution inside the molecule) and van der Waals forces (attraction between molecules) must also be considered. To simulate these forces, scientists need the exact molecular geometry showing how atoms are positioned in all three dimensions and the exact charge distributions inside the molecules.

Through DFT calculations at the Swiss National Supercomputing Center, Aliaksandr Yakutovich structurally relaxed the ring with six TMA molecules on a copper slab containing 1,800 copper atoms. In structural relaxation, a basic geometric or structural model is optimized to find the configuration of atoms with the lowest possible energy.

In this study, Zahl analyzed the nature of the self-assembly of TMA molecules into honeycomb-like network structures on a clean copper crystal. Zahl initially imaged the structures on a large scale with a scanning tunneling microscope (STM). This microscope scans a metallic tip over a surface while applying an electrical voltage between them. To identify how the network structure aligned with the substrate, CFN materials scientist Jurek Sadowski bombarded the sample with low-energy electrons and analyzed the pattern of diffracted electrons. Finally, Zahl performed HR-AFM, which is sensitive to the height of surface features on a submolecular scale.

“With STM, we can see the networks of TMA molecules but can’t easily see the orientation of copper at the same time,” said Zahl. “Low-energy electron diffraction can tell us how the copper and TMA molecules are oriented relative to each other. AFM allows us to see the detailed chemical structure of the molecules. But to understand these details, we need to model the system and determine exactly where the atoms of the TMA molecules sit on copper.”

For this modeling, the team used density functional theory (DFT) to calculate the most energetically favorable arrangements of TMA molecules on copper. The idea behind DFT is that the total energy of a system is a function of its electron density, or the probability of finding an electron in a particular spot around an atom. More electronegative atoms (like oxygen) tend to pull electrons away from less electronegative atoms (like carbon and hydrogen) they are bonded to, similar to a magnet. Such electrostatic interactions are important to understanding chemical reactivity.

Mark Hybertsen, leader of the CFN Theory and Computation Group, carried out initial DFT calculations for an individual TMA molecule and two TMA molecules joined by hydrogen bonds (a dimer). Aliaksandr Yakutovich from the nanotech@surfaces Laboratory of the Swiss Federal Laboratories for Materials Science and Technology (Empa) then ran DFT calculations of a larger TMA network made up of a complete ring of six TMA molecules.

These calculations showed how the molecules’ inner carbon ring is distorted from a hexagonal to a triangular shape in the AFM image because of strong polarizations caused by three carboxyl groups (COOH). Additionally, any unbound oxygen atoms are pulled a bit down toward the surface copper atoms, where more electrons reside. They also calculated the strength of the two hydrogen bonds forming between two TMA molecules. These calculations showed each bond was about twice as strong as a typical single hydrogen bond.

“By connecting atomic-scale models to the AFM imaging experiments, we can understand fundamental chemical features in the images,” said Hybertsen.

“This capability may help us identify critical molecule properties, including reactivity and stability, in complex mixtures (such as petroleum) based on HR-AFM images,” added Zahl.

To close the loop between modeling and experiment, collaborators in Spain inputted the DFT results into a computational code they developed to generate simulated AFM images. These images perfectly matched the experimental ones.

“These accurate simulations unveil the subtle interplay of the original molecular structure, deformations induced by the interaction with the substrate, and the intrinsic chemical properties of the molecule that determine the complex, striking contrast that we observe in the AFM images,” said Ruben Perez of the Universidad Autónoma de Madrid.

From their combined approach, the team also showed that line-like features appearing between molecules in AFM images of TMA (and other molecules) are not fingerprints of hydrogen bonds. Rather, they are “artifacts” from bending of the AFM probe molecule.

“Even though hydrogen bonding is very strong for TMA molecules, hydrogen bonds are invisible in the experiment and simulation,” said Zahl. “What’s visible is evidence of strong electron withdrawing by the carboxyl groups.”

Next, Zahl plans to continue studying this model system for network self-assembly to explore its potential for QIS applications. He will use a new STM/AFM microscope with additional spectroscopic capabilities, such as those for controlling samples with a magnetic field and applying radio-frequency fields to samples and characterizing their response. These capabilities will allow Zahl to measure the quantum spin states of custom molecules arranged in a perfect array to form potential quantum bits.

This research was supported by the U.S. Department of Energy (DOE) Office of Science. All imaging experiments were performed in the CFN Proximal Probes Facility. Initial computations at the CFN ran at the Scientific Data and Computing Center of the Computational Science Initiative at Brookhaven Lab. The Swiss National Supercomputing Center and the Spanish Supercomputing Network (MareNostrum at the Barcelona Supercomputing Center) supported the larger-scale computations. The other collaborating institutions are the E´cole Polytechnique Fe´de´rale de Lausanne; Quasar Science Resources, SL; and Universidad Pablo de Olavide. Other funding was provided by the Spanish MINECO; Comunidad de Madrid; Quasar Science Resources, SL; and Spanish Ministerio de Ciencia e Innovación.