Steering the Conversion of CO2 and Ethane 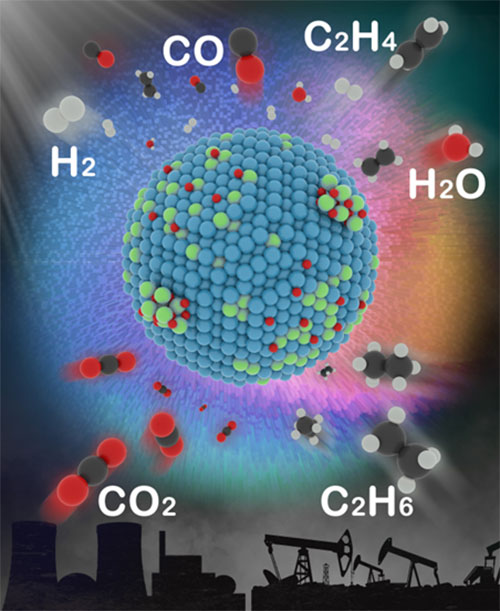 The illustration shows the catalyst and the various products it can help create. Image credit: Journal of the American Chemical Society 2022 144 (9), 4186-4195.

Scientists identified key catalytic features that drive the transformation of carbon dioxide (CO2), with help from ethane, into higher-value chemicals.

In this study, the researchers solved the challenge of discovering the right catalytic pathway for using ethane to convert CO2 into gas for generating electricity, liquid fuels, or ethylene.

Converting carbon dioxide (CO2) and ethane—an underutilized component of natural gas—into chemicals with higher value would allow us to make use of a potent greenhouse gas and an unused reservoir of hydrocarbons. But ensuring such reactions specifically lead to one desired product or another can be a challenge.

In this study, a team of researchers discovered the underlying principles that determine the behavior of catalysts—the chemical “deal makers” that bring reactants together—thereby providing the key to more selective reactions. The team specifically investigated the catalytic selectivity for one set of reactions: transforming CO2 and ethane (C2H6) into synthesis gas (useful for generating electricity or making liquid fuels) or, alternatively, ethylene (a building block for making paints, plastics, and other polymers).

To discover the key principles, the team conducted detailed studies of a series of bimetallic (two-metal) catalysts—using different metals paired with palladium. For each combination, they examined how the metals come together and measured how the mix of reactants and products changes during the reaction. The team collaborated with staff scientists at the National Synchrotron Light Source II (NSLS-II), the Center for Functional Nanomaterials (CFN), and the Advanced Photon Source (APS)—three DOE Office of Science user facilities at Brookhaven and Argonne National Laboratory, respectively—to study the catalysts’ atomic structures and electronic properties using powerful x-rays. At the NSLS-II, the team specifically turned to the Inner-Shell Spectroscopy (ISS) and Quick X-ray Absorption and Scattering (QAS) beamlines for in situ x-ray absorption studies, while they used diffraction techniques at the APS.

At the CFN, the team used advanced research tools, including transmission electron microscopy and Raman spectroscopy, to further investigate the properties of their materials. For theoretical calculations, the team used computational resources at the CFN and supercomputers at the National Energy Research Scientific Computing Center, a DOE Office of Science user facility located at DOE’s Lawrence Berkeley National Laboratory. The modeling used “density functional theory” (DFT) to predict how the atoms in the catalyst change as the reaction progresses.

The two key principles the team discovered are: 1) the “formation energy” of the bimetallic catalyst—how tightly bound together the two metals are—and 2) the binding energy between the catalyst and oxygen released from the CO2 during the reaction. The team believes that their experiments and theory could be extended to other bimetallic catalysts, opening a path to new design principles for catalysts.

This work was financially supported by the Division of Chemical Sciences, Geosciences, & Biosciences, Office of Basic Energy Sciences and carried out at Brookhaven National Laboratory, operated under contract DE-SC0012704 with the US Department of Energy. This research used resources (FEI Talos F200X TEM, Hitachi HD2700C STEM, WiTec Raman, and PerkinElmer TGA) of the Center for Functional Nanomaterials (CFN) and beamlines 8-ID (ISS) and 7-BM (QAS) of the National Synchrotron Light Source II (NSLS-II) at Brookhaven National Laboratory (Contract No. DE-SC0012704 and DE-SC0012653) and of beamline 17-BM-B of the Advanced Photon Source (APS) at Argonne National Laboratory (Contract No. DE-AC02-06CH11357), U.S. DOE Office of Science User Facilities. Beamline operations were supported in part by the Synchrotron Catalysis Consortium (U.S. DOE, Office of Basic Energy Sciences, Grant No. DE-SC0012335). The DFT calculations were performed using computational resources at the Center for Functional Nanomaterials, a user facility at Brookhaven National Laboratory, and at the National Energy Research Scientific Computing Center (NERSC), which is supported by the Office of Science of the U.S. DOE under Contract No. DE-AC02-05CH11231. We acknowledge Dr. Ning Rui and Dr. Sanjaya D. Senanayake for their kind help in AP-XPS measurements. We also thank Mr. Wenjie Liao for the help on graphical art.