The following article was originally published by the University of New Hampshire. The Quantum Material Press (QPress) is a first-of-its-kind tool that combines robotic facilities and artificial intelligence at the Center for Functional Nanomaterials, a U.S. Department of Energy (DOE) Office of Science user facility at DOE’s Brookhaven National Laboratory. QPress will support the research efforts described in this article by automating the production of layered materials and providing a controlled environment for air-sensitive samples. For more information on QPress or Brookhaven’s role in this research, contact Stephanie Kossman (skossman@bnl.gov, 631-344-8671). 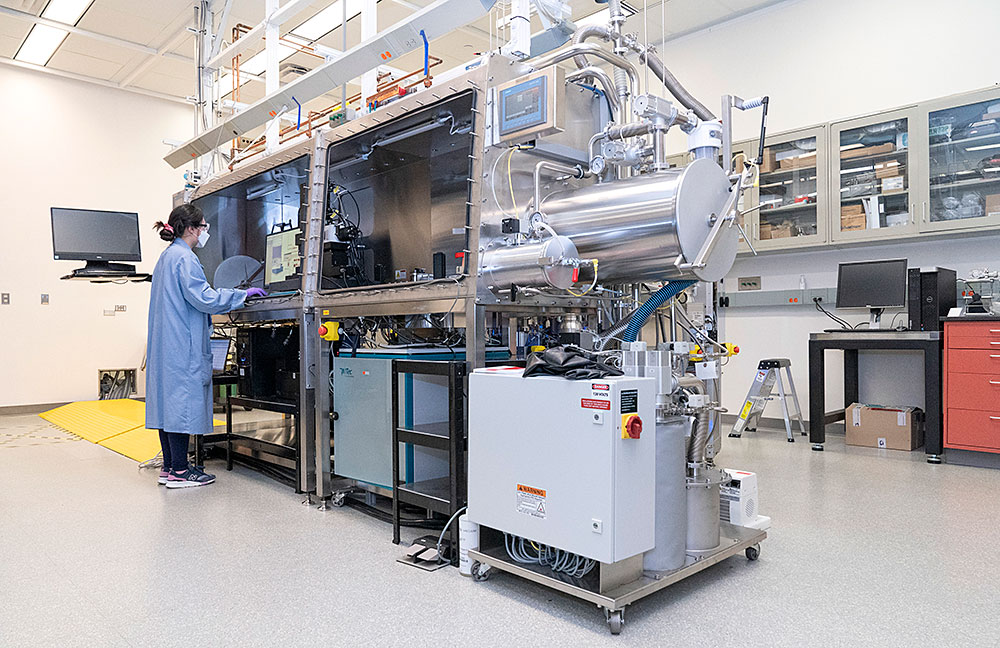 The Quantum Material Press at Brookhaven's Center for Functional Nanomaterials will support the University of New Hampshire's research by automating the production of layered materials and providing a controlled environment for air-sensitive samples.

Shawna Hollen, an associate professor in the department of physics and astronomy, was recently awarded a $350,000 grant from the National Science Foundation (NSF) to create and study new two-dimensional materials that could produce a breakthrough in memory and computing technologies. 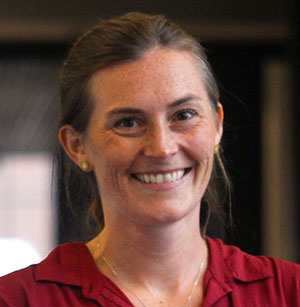 Hollen will work in partnership with researchers at George Mason University and the Brookhaven National Laboratory (BNL) Quantum Materials Press (QPress) and theorists at the Naval Research Lab. The main objective of this project is to accelerate the production of next-generation technologies by achieving unprecedented control over the physics in quantum materials. Two-dimensional materials, also known as single layer materials, are crystalline solids consisting of a single layer of atoms.

“This award is a huge step for our collaboration and will enable us to undertake this carefully planned but challenging project,” says Hollen. “It will connect UNH students to world-class labs and collaborators. I am excited for what is to come.”

The three-year project will focus on making new materials — the first artificial crystals of Tantalum disulfide (TaS2) —  before working toward understanding their properties and making new discoveries about how the materials behave. Hollen will focus on stacking the crystals in a new two-layer twisted format, which stacks the atoms in a way that creates a superstructure. The process could control the behavior of the electrons in the crystal and potentially tip the balance from insulating to conducting.

Hollen says the biggest challenge is creating the new crystals. 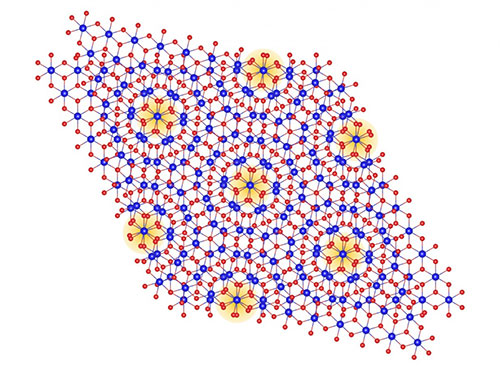 Rendering of a two-dimensional TaS2.

“They are delicate flakes, and they are chemically sensitive to air and begin degrading in a matter of minutes,” says Hollen. “We will be collaborating with expert partners and using state-of-the-art tools at QPress at BNL to overcome these challenges.”

In addition to potential breakthroughs in quantum technologies through materials innovation, the project also aims to create a new generation of scientists and engineers in the field. Funding will support career development, STEM outreach to the K-12 community and the hiring of a student outreach and communication coordinator.