The following feature story about a Texas-based study of atmospheric conditions and their connections with pollution and weather was published today by the U.S. Department of Energy’s (DOE) Atmospheric Radiation Measurement (ARM) user facility. Michael Jensen, a meteorologist at DOE’s Brookhaven National Laboratory, is the lead scientist for this field campaign, which is known as TRACER. For more information about Brookhaven’s role in TRACER, contact Karen McNulty Walsh, Brookhaven Lab Media & Communications Office, kmcnulty@bnl.gov, 631-344-8350.

TRACER, an epic investigation of coastal convection, moves from observations to data analysis 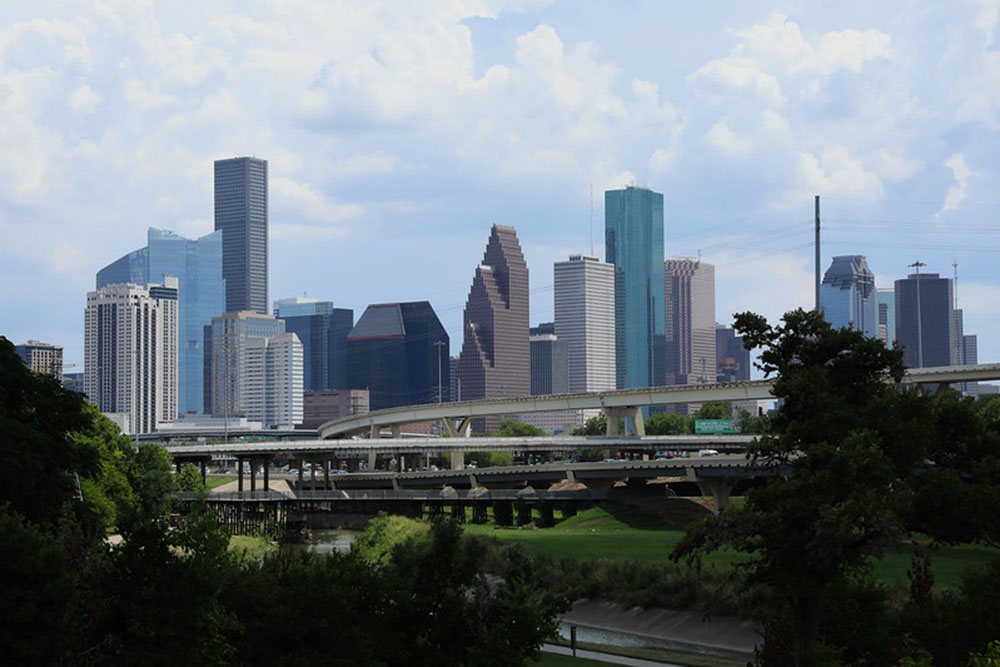 In weather terms, convection is the process of conveying heat and moisture upward through a turbulent atmosphere. From there, convection forms clouds mostly puffy, rain-free shallow cumuli. But others evolve into towering cumulonimbus, or anvil clouds, which form thunderstorms.

Thunderstorms bring needed rain—more than any other water source in the Earth’s middle latitudes. But they also bring heavy precipitation, lightning, and hail—a crush of conditions that can cause significant impacts on people and infrastructure.

Science has not fully answered some related questions. How do multiple interacting atmospheric processes control the details of how thunderstorms form, grow, and dissipate? How are these governing processes influenced by aerosols, the tiny particles in the air that make clouds and precipitation possible? And how does all this interact in urbanized coastal terrain?

Such questions require improved predictive models, which need the kind of data now on hand from a comprehensive yearlong field campaign funded by the U.S. Department of Energy (DOE): the TRacking Aerosol Convection interactions ExpeRiment (TRACER).

After two COVID-related delays, operations started October 1, 2021, in and around Houston, Texas. This coastal region—subtropical, humid, and stormy—was ideal for such inquiries.

“I don’t think there has ever been another urban coastal study like this,” says TRACER’s lead scientist, Michael Jensen, a meteorologist at DOE’s Brookhaven National Laboratory in New York. “Not one focused on clouds and aerosols, at least. And there’s never been one with the same scope.”

‘My head is spinning’ 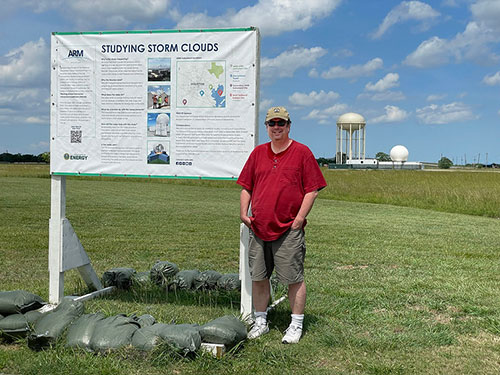 TRACER researchers measured the impact of aerosols on convective vigor. They studied how the dynamics of sea breezes interacted with urban emissions and those of cleaner rural areas.

By September 30, 2022, after a year of measurement at three main sites, TRACER had racked up 38 terabytes of data.

“It’s going to be a rich data set,” says Jensen. “I am seeing so, so many cool, different science directions to go in. My head is spinning.”

Jensen outlines TRACER by the numbers. A few of the facts:

TRACER included a four-month intensive operational period (IOP) from June through September 2022. IOPs are marked by an increased tempo of operations, more personnel in the field, and more instruments at work. 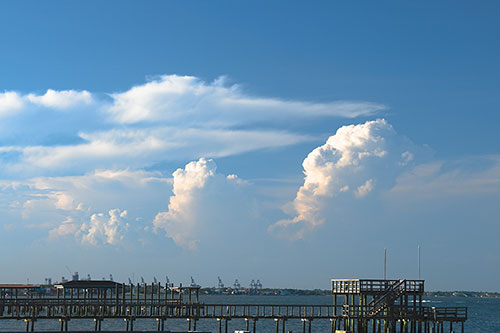 Sea-breeze influences were a big part of TRACER research on Houston-area factors affecting convective storms. Here, a line of decaying storms puffs in the sky near coastal Kemah, Texas, in June 2022. Photo is by Scott Collis, Argonne National Laboratory.

The Houston region is exceptionally rich terrain for studying the evolution of convective storms.

To TRACER’s advantage, the Houston area is heterogeneous; that is, it has the environmental complexity scientists seek. It includes an urban core, a fringe of heavy industry, and suburban and rural environments.

Add to that another regional influence that researchers studying convection are eager to know more about: an ocean coastline. The Gulf of Mexico is connected to the Atlantic, and sea breezes are thought to help prompt convective activity.

TRACER’s unique data include measures of the radiative energy balance as frontal boundaries come through the region a feature—of convective storms that “I don’t think anyone has really quantified before,” says Jensen.

A test of endurance 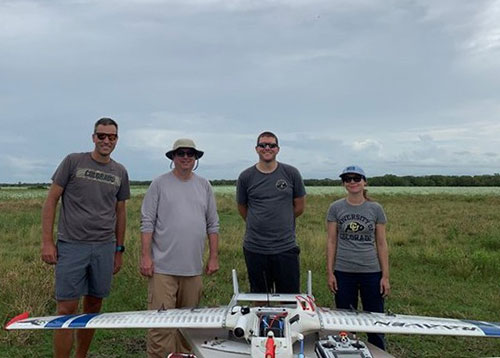 On August 26, 2022, Jensen (second from left) visited a few members of the University of Colorado Boulder team in Brazoria County, Texas, for a TRACER-related campaign using uncrewed aerial systems. At the far left is lead scientist Gijs de Boer. At the far right is postdoctoral researcher Radiance Calmer; next to her is remote-sensing lab manager Michael Rhodes. The RAAVEN aircraft is in front. Photo is courtesy of Jensen.

The IOP, says Jensen, “was a test of endurance,” especially for the scientists and technicians who spent long weeks or months onsite. A few were there for TRACER’s full year.

TRACER co-investigator Chongai Kuang of Brookhaven Lab recalled his time in the field in Guy, Texas, watching a tethered balloon system (TBS) carry his and other instruments aloft through humid skies under a blazing sun.

“This was a pretty rad way to spend the summer, (essentially) in a farmer’s field,” he says, adding praise for those who stayed for the whole IOP.

Gijs de Boer, a senior research scientist from the University of Colorado Boulder/NOAA, took part in TRACER. In early October, he summed up his post-campaign mood: “Yes. Happy.”

Sea breezes from the Gulf of Mexico help govern the formation and life cycle of the Houston region’s convective clouds. To date, numerical models do not represent the clouds in such coastal regimes very well.

With an eye to better models, de Boer’s team set up its UAS to capture data on the vertical and horizontal variability of atmospheric properties. These include humidity, wind speed, and temperature. The fixed-wing RAAVEN aircraft also swept up data on the horizontal gradients of aerosol size distributions.

RAAVEN, developed at the University of Colorado Boulder, stands for Robust Autonomous Aerial Vehicle-Endurant Nimble. During TRACER, these aircraft—91 inches wide and powered by batteries—were catapulted into the air for missions that averaged 90 minutes each.

Now, de Boer’s TRACER-UAS team will quality-check its measurements, deliver them to the ARM Data Center, and complete a data paper “describing what we did,” he says. “Then we’ll move on to science (that is) focused on regional aerosol properties and statistics of the Gulf breeze.” 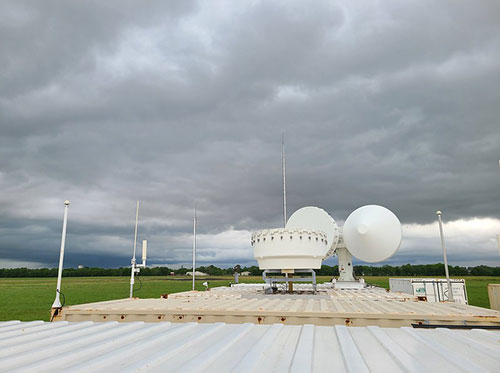 In April 2022, afternoon convection develops over the ARM Mobile Facility in La Porte, Texas. It was the main ARM instrument site during TRACER. Credit: ARM

TRACER-UAS was among 10 smaller campaigns within the TRACER framework funded by DOE’s Atmospheric System Research (ASR) program. Jensen praised ASR for its foresight in supporting projects whose funding was announced ahead of TRACER.

In addition, TRACER anticipated what is now a full-on DOE effort to support research on how climate change will affect urban areas. In fall 2022, the agency announced funding for four Urban Integrated Field Laboratories (UIFL)—in Baltimore, Maryland; Chicago, Illinois; Beaumont/Port Arthur, Texas, on the Gulf Coast; and the Arizona corridor including Tucson, Phoenix, and Flagstaff.

Related to that, ARM is requesting preliminary proposals from scientists to deploy one of three ARM Mobile Facilities to an urban region in the United States or one of its territories. (An ARM Mobile Facility supplied core instrumentation for TRACER.) The deployment could start as early as fall 2024.

Proposals can focus on aspects of urban-climate interactions, such as process gradients in a region with urban, suburban, and rural environments. The call for preproposals closes December 19, 2022.

A variety of platforms

To achieve their epic data, TRACER and its associated campaigns called on a wide variety of instrument platforms.

Such a variety of instruments “is not unprecedented,” says Jensen. “But it’s a trend we’re seeing in more field campaigns, which (matches) a trend towards more agencies working together.”

From all that time and all those instruments and collaborations, he anticipates, “10 years or 20 years from now, we’ll still be publishing results using the data we collected during TRACER.”

Data ‘as useful as possible’

“TRACER is not over yet,” says Jensen, who is planning a campaign data and science workshop in spring 2023. “We’re just moving from the observations to data analysis and modeling. This is the longest phase, where the meat of the research gets done. It could last a decade or more.”

“Ten years or 20 years from now, we’ll still be publishing results using the data we collected during TRACER.”

Principal investigators of smaller campaigns within the TRACER framework are required to deliver data within six months of the campaign’s September 2022 close. So are ARM co-investigators.

“You want at least quality-controlled data submitted by then,” says Jensen, “but final geophysical products will take more time.”

Maggie Davis, who works at the ARM Data Center, says data submitted in six months should be “meaningful and useful,” though there is a process for extending the deadline. 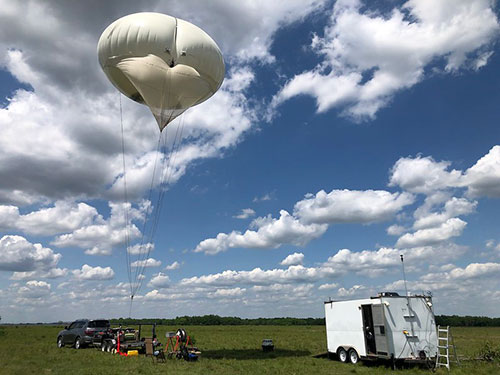 A tethered balloon system is winched into the sky in Guy, Texas, as part of TRACER. It represented one of many instrument platforms deployed during the yearlong campaign. Photo is by Brent Peterson, Sandia National Laboratories.

He and Kuang hosted a science and operations overview at the joint meeting in Rockville, Maryland. 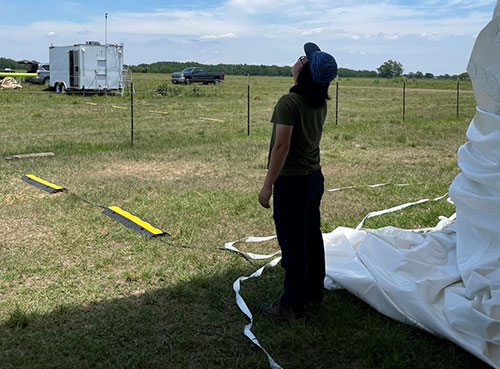 Three other experts weighed in. Pavlos Kollias, who has a joint appointment at Brookhaven Lab and Stony Brook University, talked about the preliminary analysis of data from TRACER’s novel radar tracking of convective cells.

He called the automated, algorithm-aided technique “a revolutionary approach” to getting rapid views of cloud evolution, with 12,000-plus scans recorded in “a very nontraditional data set.”

Fan also spoke of the need to nurture closer collaborations with observationalists.

“It’s very exciting to see so many observational analyses coming out of this campaign,” and so early, she said.

The meeting’s TRACER event was “a call for collaborations,” says Jensen. “There are some cool things going on. We want to start gathering people together.”