For more specific information on the individual collaborators and the techniques that produced these images and animations, please contact Justin Eure, jeure@bnl.gov.

Maps of quantum efficiency or nanoscale soil structures may not sound thrilling—after all, these specialized studies tend to be bogged down by dense data and steep learning curves. But there’s tremendous beauty in all aspects of science, and the right visualization can simultaneously reveal fundamental truths about the world and dazzle the eyes.

These images and animations showcase a small sampling of the often unexpected eye candy uncovered by Brookhaven Lab scientists through their cutting-edge research in fields ranging from x-ray lenses to cosmic cameras. There’s a story of rigorous investigation, collaboration, and scientific discovery behind each of these works. 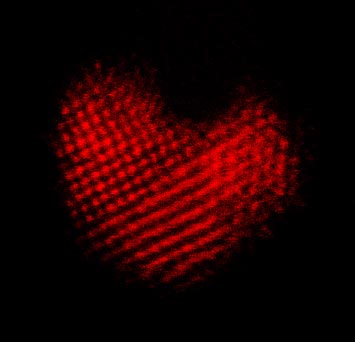 This metallic alloy of platinum, iridium, and strontium appeared as an unexpected heart—the familiar shape was a chance discovery made as scientists probed the atomic-scale structure of the material. Each of those red dots is an individual atom pinpointed with a scanning transmission electron microscope (STEM) at Brookhaven’s Center for Functional Nanomaterials (CFN). Way down on the nanoscale, color doesn't actually exist, but physicists added the red tint to bring out the romance in this custom-grown material. CREDIT: CFN’s Electron Microscopy Group

These gold and blue gradients reveal the spatial distribution of the quantum efficiency of a cesium potassium antimonide cathode fabricated at Brookhaven Lab. When tested at Jefferson Lab with a 200 kV electron gun, the center portion lost the cathode—negatively charged electrode found in batteries and other devices— due to inadvertent vacuum increase and resultant ion bombardment. Surprisingly, the rest of the cathode retained its functional efficiency. CREDIT: Laser Applications Group of the Instrumentation Division. 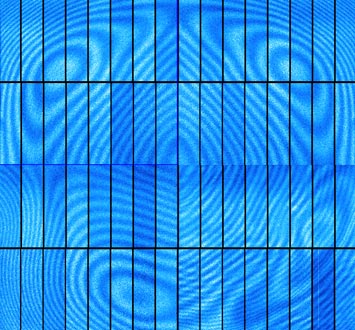 These digital camera CCDs—four chips with 16 segments each—will join 196 others inside the 3.2-gigapixel camera of the Large Synoptic Survey Telescope (LSST). The false-color image shows the CCD chips illuminated by near infrared light—the wavelength range where the LSST will study distant galaxies in its quest to reveal the secrets of dark energy and dark matter. The patterns are interference fringes caused by small thickness variations in the silicon wafer from which they were fabricated, but these striking contours will not impact performance. CREDIT: Instrumentation Division and Physics Department. 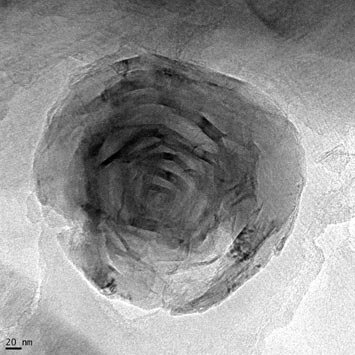 The dark lines marking the petals of this nanoscale flower are actually carbon nanotubes. When exposed to natural organic matter (NOM) in fresh water and agitated, the nanotubes form this rose-like spiral. Captured using high-resolution transmission electron microscopy (TEM) at Brookhaven Lab, this nanorose demonstrates the way carbon nanotubes could combine with organic matter and form bundles when traveling through fast-moving rivers and streams. This formation renders potentially toxic materials benign as they sink to the bottom of bodies of water and remain safely encased in NOM. CREDIT: Center for Functional Nanomaterials 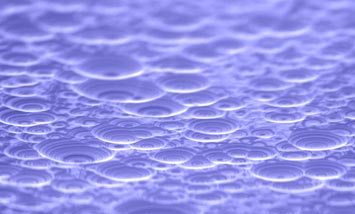 One way of focusing intense beams of x-rays down to individual nanometers involves bending them through the stacks of atomically thin materials inside multilayer Laue lenses. These drop-like domes were carved through a process called reactive ion etching, which produced the striped bubbles in this false-colored electron microscope capture. Each dark line signified a marker layer built into these ultra precise lenses. This flawed prototype—the final lenses actually look much more like symmetrical towers—helped scientists perfect the synthesis process and prepare lenses to focus x-rays to within a single nanometer using instruments like Brookhaven’s forthcoming National Synchrotron Light Source II. CREDIT: Photon Sciences 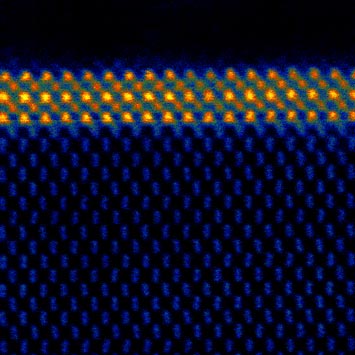 Scientists at Brookhaven Lab produce beautifully patterned materials on the smallest scales possible—those dots above are atoms, precisely placed in a process called molecular beam epitaxy. The blue pattern is a crystallized silicon substrate, and the golden grid is composed of strontium, titanium, and oxygen. The black space above isn’t empty, either; it’s actually amorphous silicon, meaning it lacks the crystal structure revealed in the other layers in this scanning transmission electron microscope (STEM) image made at the Center for Functional Nanomaterials. CREDIT: CFN’s Electron Microscopy Group 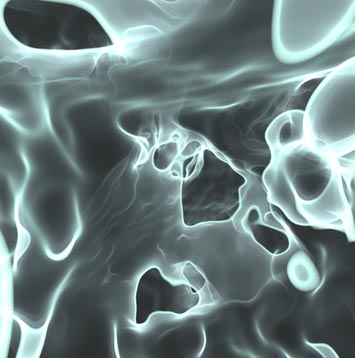 Imagine traveling through the earth like an earthworm, weaving through countless complex structures—that’s a bit like what’s happening here. Stony Brook University’s Kaloian Petkov created this 3D visualization of the nanoscale structure of dirt. The image illustrates an interactive map of soil, built using detailed microtomography data produced with bright x-rays from Brookhaven’s National Synchrotron Light Source. The diameter of the whole sample was just 1.8mm, with a voxel (volumetric pixel) resolution of 4 micrometers in each slice of the data. CREDIT: Photon Sciences, Stony Brook University

This simulation shows how energy oscillations in a boiling water reactor—one of the most common nuclear reactors used to generate electricity—evolve from core-wide to regional. Those centrally concentrated red peaks shift to a much more wave-like distribution by the end. The data provides key information that helps scientists enhance safety and efficiency in these common reactors. CREDIT: Nuclear Science and Technology Department

This melting rainbow demonstrates the fluid dynamics of the perfect liquid that forms inside Brookhaven’s atom smasher. At the speed and temperature achieved inside the Relativistic Heavy Ion Collider (RHIC), the protons and neutrons that make up gold ions actually ‘melt,’ freeing the quarks and gluons inside to form this soupy plasma that existed just microseconds after the Big Bang. This simulation shows the temperatures within the collision—red represents the hotter extreme of the trillion-degree quark-gluon plasma, while blue represents the cooler end of the spectrum. CREDIT: Nuclear and Particle Physics