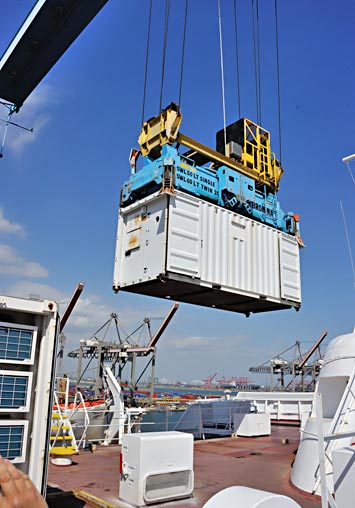 Scientists participating in a mission to collect data critical to climate modeling have arrived at a bittersweet moment: Their scientific equipment has been removed from the Horizon Spirit, the ocean-going cargo vessel that doubled as their moving laboratory this past year, and they have said goodbye to the ship’s captains and crew. “But now comes more fun,” said atmospheric scientist Ernie Lewis, “figuring out what we can learn from all the measurements we’ve taken.”

Lewis, who works for the U.S. Department of Energy’s Brookhaven National Laboratory, was principal investigator for the field study, dubbed MAGIC, sponsored by DOE’s Atmospheric Radiation Measurement (ARM) Climate Research Facility. The goals were to collect a year’s worth of data over a range of conditions, including measurements of meteorological and atmospheric variables that influence the formation of marine clouds, and to improve how these clouds and transitions among different cloud types are represented in climate models. The Horizon Spirit, owned and operated by Horizon Lines, was the perfect platform for their instruments, Lewis said. It makes a round-trip journey between Los Angeles and Honolulu every two weeks, crossing an area of the Pacific Ocean where transitions among cloud types typically occur.

The ship’s crew assisted in numerous ways throughout the campaign, Lewis said. “They were kind enough to make us feel welcome, even though we came with lots of luggage—three mobile scientific laboratories housed in shipping containers and other instruments that we welded on their deck!”

The data gathered by these instruments—primarily the “Second ARM Mobile Facility” plus other equipment designed and maintained by scientists at Brookhaven, DOE’s Argonne National Laboratory, and elsewhere—are already attracting interest from scientific collaborators around the globe. Scientists analyzing MAGIC data will present some of these findings at two upcoming meetings: DOE’s Atmospheric System Research Working Group Meeting in Washington, D.C., in November, and the American Geophysical Union Fall Meeting in San Francisco, in December. 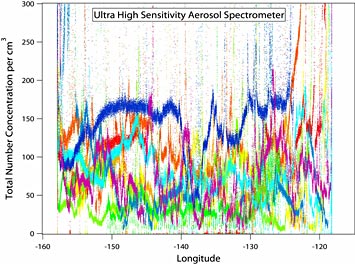 Particles measured per cubic centimeter of air at longitudinal locations between Honolulu and Los Angeles on different trips of the Horizon Spirit (data from each crossing shown in a different color). See story text for further explanation.

One example is a graph showing the number of aerosol particles with an optical diameter greater than 60 nanometers per cubic centimeter of air—a volume slightly smaller than half the size of a sugar cube—as measured by the “ultra high sensitivity aerosol spectrometer.” On the graph, data from each of several legs of the MAGIC study are shown in a different color and plotted by the longitudinal location at which the measurement was made as the ship moved across the Pacific.

The first thing Lewis notes is that the number concentration of particles is quite low. “This is clean air!” he says. “Concentrations of these particles range from 50 to around 150 per cubic centimeter, whereas typical values for an urban area might be ten times as high.”

He also notes the wide variability in values from one leg to the next, shown in the different colors, and that there does not appear to be a clear longitudinal trend—as might be expected if the concentration were strongly controlled by factors like sea surface temperature or cloud cover that increase or decrease along the Los Angeles to Honolulu transect.

“They were kind enough to make us feel welcome, even though we came with lots of luggage—three mobile scientific laboratories housed in shipping containers and other instruments that we welded on their deck!”

Large dips in concentrations at particular points on certain trips (the purple and blue lines around -140 degrees longitude, for example) might have been caused by precipitation, which removed particles from the atmosphere. “We can check this hypothesis by looking at results from other instruments, such as the radars,” Lewis said. “Spikes in the data when large values occur for very short times could be the result of exhaust plumes from other ships. Comparison of data from some of the other aerosol instruments will assist us in determining if this hypothesis is correct.”

Lewis emphasizes that the scientists are just starting the process of sifting through and cross checking data—and asking many, many questions. How do these particle concentrations affect the formation of clouds? Can the “signatures” of particles from particular ships be used to determine atmospheric mixing rates—how plumes spread and dissipate as they move downwind? Can this information be used to help unravel the role played by sea spray particles in cloud formation?

“The great thing about this study is the large volume of data we’ve collected and the many ways you can look at it. We are actively interested in the input of other scientists and hope that as we present our findings and the kinds of data sets we have available, more will join in on this truly collaborative effort.”

Much of the equipment from MAGIC is moving on to other sampling sites around the globe. But Lewis hopes to come back to the Spirit at some point in the future to address new questions that arise after careful analysis of the current data.

You can read regular updates from Ernie Lewis from throughout the study period and on into the future.

The MAGIC campaign is funded through ARM by the DOE Office of Science.