Bringing Nanoscience into the K–12 Classroom 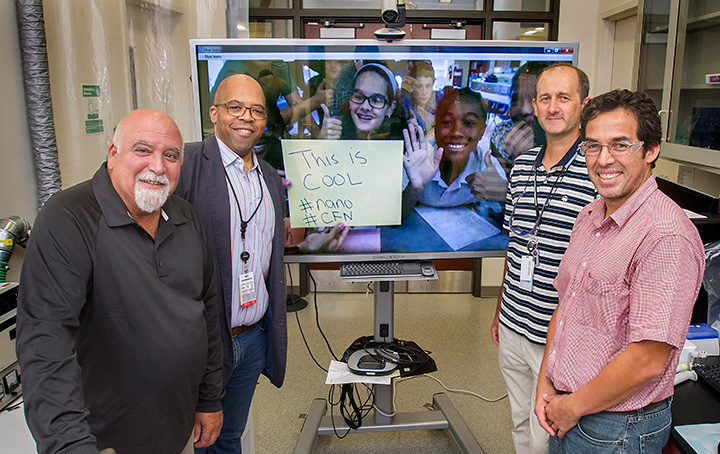 On September 14, 2016, Brookhaven Lab's Center for Functional Nanomaterials (CFN) hosted a videoconference research session for middle and high school students in Freeport School District, where a nanotechnology curriculum was recently introduced. From left to right: Edward Irwin, a science research instructor at Freeport High School; James Dickerson, assistant director of CFN; Dmytro Nykypanchuk, a materials scientist at CFN; and Fernando Camino, a physicist at CFN. During the session, the students learned two techniques for measuring the size of gold nanoparticles that one of their peers made in a lab at the high school.

At the nanoscale, small changes can have a big impact. That’s because materials start to behave very differently in a world where individual atoms and molecules can be manipulated. Some materials become better conductors of electricity. Once-opaque substances can become transparent. Unreactive ones become reactive. With such properties, scientists can develop faster computer processors, more efficient solar cells, cheaper water-filtration systems, and other breakthrough technologies.

In the classroom, small changes can also have a big impact.

Just ask the students at Freeport School District, where a first-of-its-kind nanotechnology program was just introduced into their science curriculum through a partnership with the Center for Functional Nanomaterials (CFN), a U.S. Department of Energy (DOE) Office of Science User Facility at Brookhaven National Laboratory.

“I’ve done science projects involving nanoparticle work in the past, but this is more than that. Being able to connect with Brookhaven Lab scientists and their labs puts my science research on a whole different level,” said Leah Hochman, a 10th grader at Freeport High School.

“For my research project, I’ve looked into how nanoparticles affect Lenz’s Law, a phenomenon in which a magnetic field induces electricity in highly conductive metals. The introduction of nanoparticles into my project has made my project so unique and interesting, and I can’t thank Brookhaven enough for this incredible opportunity,” said 11th grader Joseph LaRocca.

Freeport School District is one of three districts that the New York State School Boards Association recently recognized with a 2016 Be the Change for Kids Innovation Award. The award—part of an initiative that encourages innovation in teaching and learning methods within schools—highlights educational programs that are setting the stage for K–12 students to succeed in college, in their careers, in their communities, and as citizens. 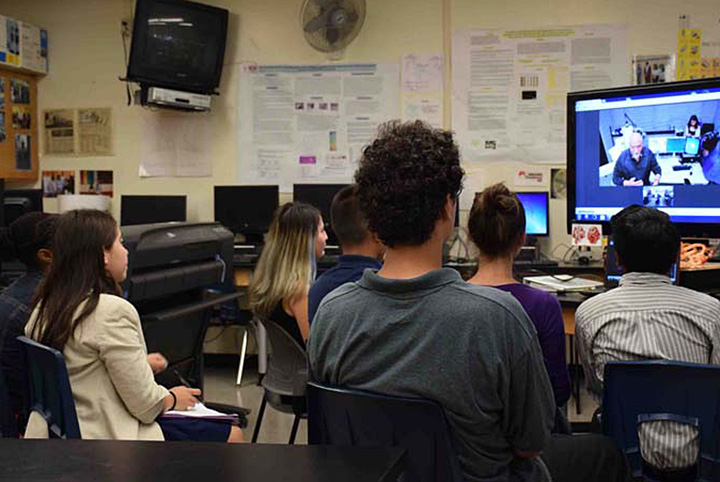 “As a former high school teacher, I know how critical hands-on learning and active participation are to a student’s future, especially when it comes to science education,” said James Dickerson, assistant director of the CFN. So when Brookhaven senior scientist emeritus Keith Jones approached Dickerson about his idea for the CFN to entertain a different kind of user—local schools—Dickerson jumped on board. For several years, Jones has been collaborating with teachers concerned with energy and environment topics related to Long Island to encourage students to pursue interests in science, technology, engineering, and mathematics (STEM) fields. After successfully coordinating visits of high school students to the National Synchrotron Light Source II, another DOE Office of Science User Facility located at Brookhaven, he thought the same sort of educational outreach could be extended through CFN.

Dickerson hosted workshops for school districts across Long Island, explaining to administrators what CFN does and how to submit a user proposal, and Vincent Pereira, director of science for Freeport School District, knew he wanted his district to be part of the pilot effort. “The opportunity to work with scientists at the cutting edge of nanoscience was one we couldn’t pass up,” said Pereira. “We submitted a proposal.”

Dickerson and Jones, with the help of CFN staff members Fernando Camino, Aaron Stein, and Dmytro Nykypanchuk, helped set the stage for Freeport’s user proposal to CFN. This effort involved coming up with a way to have the students see and engage in science research at a facility where regulations restrict those under the age of 18 from entering its labs. Their solution was to bring the students “into” the lab through a portable videoconferencing system that could be transported from lab to lab for different experiments, which would be conducted by their teachers and Brookhaven scientists. 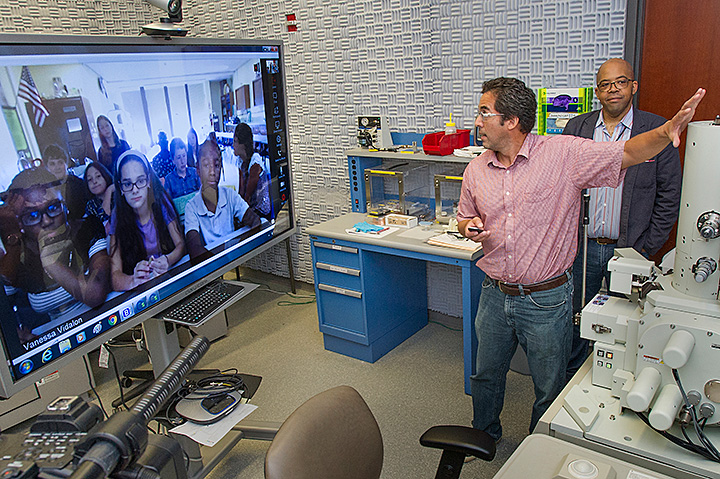 Brookhaven physicist Fernando Camino explains how the electron microscope works before using it to image the student-made gold nanoparticles.

“As far as we are aware, this is the first time a school district has submitted a successful user proposal at a DOE Nanoscale Science Research Center,” said Dickerson. “We hope that as one of the five such centers, CFN will become a model for how to engage secondary school students in nanoscience.”

Called “Introducing Nanotechnology into the K–12 Science Curriculum,” the program was motivated by Freeport School District’s desire to make science—particularly nanotechnology—more relevant to its students. The continued growth of the nanotechnology industry will drive the need for a new generation of skilled workers, especially minorities and economically disadvantaged students who are underrepresented in STEM fields.

“More than 90 percent of our students are African American or Hispanic, and 64 percent are economically disadvantaged,” said Pereira. “The goal of the nanotechnology program is to increase minority student enrollment in science research and advanced placement courses in physics, chemistry, biology, and computer science, and, ultimately, prepare them for the 21st century workforce.” 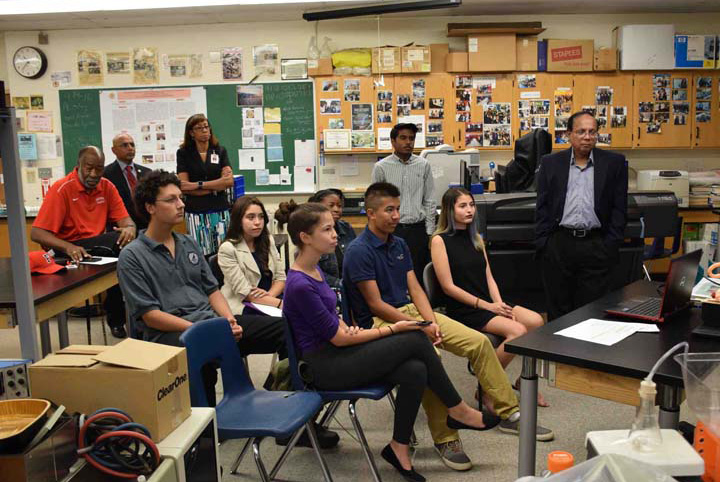 High school students and administrators from Freeport School District participate in the first videoconference research session of the nanotechnology program.

To integrate the program into all grade levels of the K–12 system, district educators adapted the curriculum accordingly. Students start with an introduction to nanoscience and work their way up to a more rigorous curriculum that involves experiment and theory.

Elementary school students engage in various hands-on activities in which they observe how nanomaterials behave. In one activity, they explore nanosand—sand coated with a nanometer-thick layer of silicon that repels water—and contrast it with normal sand. In another project, they watch how water rises through a normally capillary tube versus a tube coated with a nanolayer of water-repellent material, noting the shape of the meniscus (curved surface of a liquid) and the height of the water in the capillary.

At the intermediate level, they go one step further, finding the mathematical relationship between the radius of the capillary and the height of the liquid in the tube. Middle school students also investigate the properties of light—how it is scattered by colloidal particles, for example. They come to understand that the smallest observable object is limited by the wavelength of light being bounced off the object. 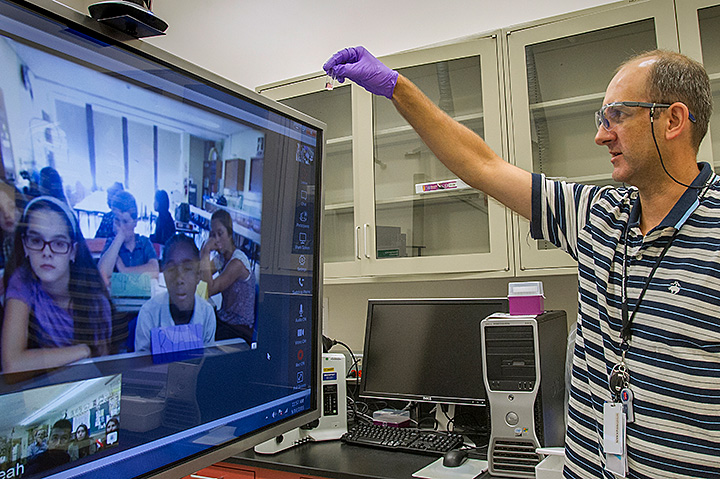 Brookhaven materials scientist Dmytro Nykypanchuk shows the students the gold nanoparticle solution that he is about to place in a light-scattering instrument.

High school students synthesize nanoparticles in their school science laboratory. Through videoconferencing, they watch their teachers working alongside CFN scientists as they use scanning electron microscopes and light-scattering equipment to determine the size of these nanoparticles (see sidebar). During this interactive session, the students are free to ask the scientists questions.

“We’re standing on this side of the screen, but someday you—budding scientists and engineers—will replace us,” said James Dickerson to the J.W. Dodd Middle School and Freeport High School students that dialed in for a videoconference research session at the Center for Functional Nanomaterials (CFN) on September 14, 2016. Dickerson, assistant director of CFN, was standing in one of the electron microscopy labs with physicist Fernando Camino and materials scientist Dmytro Nykypanchuk. Also in the room was Edward Irwin, a science research instructor at Freeport High School.

“This experience makes science real to them in a way they cannot experience in a traditional classroom,” said Pereira. “It’s not every day that students get the opportunity to speak to scientists.”

Back inside the classroom, the high schoolers learn the relevant physics behind nanoparticles. For example, the Advanced Placement physics classes include a lesson on localized surface plasmons—collective excitations of electrons at the surface of metal nanoparticles that induce unique optical properties. The students also write computer programs that calculate the percentage of light transmitted through the nanoparticles and check this calculation against their experimental results.

“Although the program is still in its early stages, we’re already seeing its impact. The students at Freeport High School and J.W. Dodd Middle School are very eager to learn new ideas and inquisitive about the equipment their teachers are using,” said Pereira. “In one particular demonstration, they saw the Tyndall effect phenomenon—the scattering of visible light by colloidal particles. They liked this demonstration so much that they begged their teacher to show it again!”

Freeport and the other two school districts will be formally presented with their awards at the 97th Annual New York State School Boards Association meeting, to be held October 27 through 29. Each district will receive $5,000 toward its program, funded by the Colleges of Nanoscale Science and Engineering at the State University of New York (SUNY) Polytechnic Institute.

Going forward, Pereira plans to give presentations about the nanotechnology curriculum at state and national science meetings and at local community events. “By highlighting all of the nano lab activities ongoing in our district, we hope to inspire other school districts to adopt a similar program,” he said.

Pereira will continue to evaluate the program’s impact by determining the percentage of students enrolled in science research and advanced placement courses in STEM subjects, as well as by keeping track of college majors that students declare upon graduating high school. Meanwhile, Dickerson will seek partnerships with other Long Island school districts that are interested in implementing a nanotechnology program in their curriculums.

Because one small change in curriculum can have a big impact on a student’s interest in STEM—one that can evolve into a passion and, eventually, a career.