3D Protein Structure Helps in the Search for a Vaccine 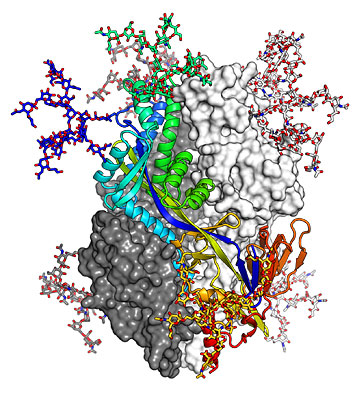 The structure of the pre-fusion hMPV F trimer is shown as ribbons and colored from blue to red, while other molecular surfaces are colored in white and dark gray. Image courtesy of Nat Commun 8, 1528 (2017).

Combining cryogenic macromolecular crystallography with modeling based on the known structure of a homologous molecule, scientists revealed the 3D structure of the human metapneumovirus (hMPV) F glycoprotein, which mediates cell-virus membrane fusion and could be a potential target for an anti-viral vaccine, with an 2.6-Å resolution.

The hMPV is a frequent cause for bronchitis in young children, and so far no vaccine for humans has been found. In this study scientists revealed the existence of a dense glycan shield at the apex of thehMPV’s F glycoprotein. This new knowledge about the virus’ structure may help scientists in their search for a vaccine.

hMPV is a frequent cause of bronchiolitis in young children, and so far no vaccine for humans has been found. The studied protein is responsible for fusion of the virus with human cells and could provide new and important information for the search for a vaccine.

This research used the AMX beamline 17-ID-1 of the National Synchrotron Light Source II, a US Department of Energy (DOE) Office of Science User Facility operated for the DOE Office of Science by Brookhaven National Laboratory under contract no. DE-SC0012704. This work used electron microscopy and the Genomics core facility (ISCIII) for sequencing and was supported in part by grants 5T32AI007519-18 (M.B.B.), SAF2015-67033-R (J.A.M.), and P20GM113132 (J.S.M.). The Life Science Biomedical Technology Research resource is primarily supported by the National Institute of Health, National Institute of General Medical Sciences (NIGMS) through a Biomedical Technology Research Resource P41 grant (P41GM111244), and by the DOE Office of Biological and Environmental Research (KP1605010). As a National Synchrotron Light Source II facility resource at Brookhaven National Laboratory, work performed at the LSBR is supported in part by the U.S. Department of Energy, Office of Science, Office of Basic Energy Sciences Program under contract number and DE-SC0012704 (KC0401040).