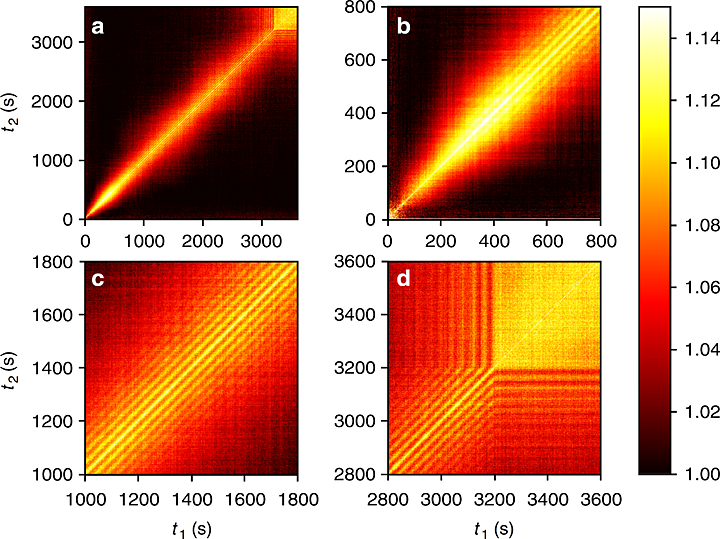 This selection of images shows data from the C60 deposition measurements. The top left panel (a) shows the complete 1-hour data collection, while the top right panel (b) shows a detailed view of the early time where the transition to local step-flow takes place. The bottom left panel (c) shows a close-up view during the middle of the scan when the growth is continuous, while the bottom right panel (d) presents a view of the end of the deposition, showing the moment the scientists ended the deposition.

Scientists demonstrated a new experimental capability for watching thin film growth in real time that depicts the process more accurately than any traditional technique can. They watched how soccer-ball-shaped C60 molecules are deposited on a surface.

Thin films are essential parts of some of our most important technologies such as computer chips and solar cells. The results of this study could be used to improve organic solar cells and future research on other types of thin films for a wide variety of applications.

This animation is a simplified representation of thin film growth. As C60 molecules are deposited onto a material, they form multiple layers simultaneously—not one layer at a time.

From paint on a wall to tinted car windows, thin films make up a wide variety of materials found in ordinary life. But thin films are also used to build some of today’s most important technologies, such as computer chips and solar cells. Seeking to improve the performance of these technologies, scientists are studying the mechanisms that drive molecules to uniformly stack together in layers—a process called crystalline thin film growth. Now, scientists have demonstrated a new experimental capability for watching thin film growth in real-time and that depicts the process more accurately than traditional techniques.

In this study, the scientists focused on the growth process of a nanomaterial called C60, which is popular for its use in organic solar cells. The scientists used a technique called x-ray photon correlation spectroscopy at the Coherent Hard X-ray Scattering (CHX) beamline of the National Synchrotron Light Source II (NSLS-II)—a U.S. Department of Energy (DOE) Office of Science User Facility at DOE’s Brookhaven National Laboratory—to watch how the C60 molecules are deposited onto a material.

They found that the molecules stack in mounds composed of multiple layers, and that multiple layers form simultaneously instead of growing one layer at a time. After a molecule reaches the surface of the material, it migrates by surface diffusion towards the boundary of an existing layer, or the "step-edge," causing the step-edge to move out from the center of the mound. This process repeats as new layers are continuously formed in an organized pattern. The mound increases in height by one layer after an equivalent of one full layer of molecules has been deposited onto the material. The pattern of step-edges is self-similar after each full-layer-equivalent is deposited, just displaced one layer higher.

The main result of the study is that this repeating self-similarity, or "autocorrelation," can be quantitatively measured with coherent x-rays, and that the autocorrelations can be used to deduce certain details of how step-edges propagate during the deposition. The detailed observations of C60 from this study could be used to improve the performance of organic solar cells. Moving forward, the researchers plan to use this technique to study other types of thin films as well.