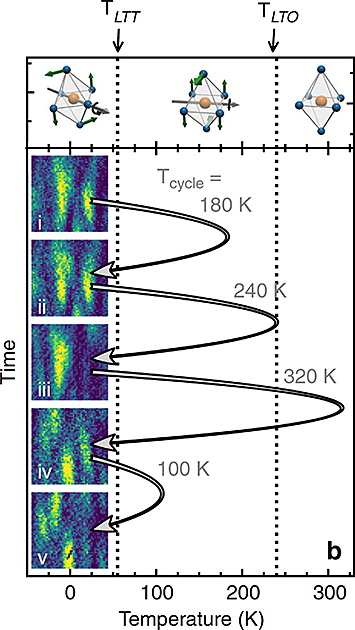 Different crystal configurations (top) and measured CDW speckle patterns (left) at different temperatures. The graphic illustrates how the patterns change once the cycling crosses above TLTO.

Scientists revealed that the charge density wave (CDW) stripe domains in the high-temperature superconductor (HTSC) La1.875Ba0.125CuO4 display a memory effect where the same domain configuration is reproduced after cycling above the CDW transition temperature.

This work showed that the charge order is fixed by pinning centers that set in at much higher temperatures. This provides an additional constraint on theories of superconductivity in these materials.

Scientists revealed that the pinning of CDW stripe domains only changes on warming above the tetragonal transition temperature (TLTT) at 240 K. A CDW is an ordered quantum fluid of electrons, which usually forms "standing wave" patterns to carry the electric current through materials.

In this study, the team of scientists investigated La1.875Ba0.125CuO4 (LBCO 1/8), a high-temperature superconductor that is known to form CDWs. The team used coherent resonant x-ray speckle correlation analysis to directly determine the reproducibility of CDW domain patterns in the material during thermal cycling. They performed the measurements at the Coherent Soft X-ray Scattering (CSX) beamline at the National Synchrotron Light Source II (NSLS-II), a U.S. Department of Energy (DOE) Office of Science User Facility located at DOE’s Brookhaven National Laboratory.

While the CDW order is only observed below 54 K, the scientists discovered remarkably reproducible CDW domain memory upon repeated cycling to far higher temperatures. They found that the memory is only lost on cycling to 240 K, when the material changes its crystal structure from tetragonal to orthorhombic. The scientists inferred that these structural features that develop below 240 K determine the CDW pinning landscape below 54 K.

This opens a new view into the complex coupling between charge and lattice degrees of freedom in superconducting cuprates.

Feature Story: "A Superconductor That "Remembers" its Electronic Charge Arrangement"