Understanding How to Tune Nanocrystal Architecture 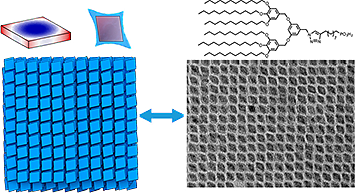 Scientists revealed the importance of ligand design for controlling the architecture of nanocrystals (NCs) during self-assembly.

NCs are important for applications such as filtration, wear resistance, and future quantum materials. This study’s findings provide a systematic way to predict their directed self-assembled structure based on ligand design.

Materials based on nanocrystals are important for many applications such as filtration and wear resistance. In many cases, the materials are created through a process called self-assembly, in which the scientists coax the crystals to combine in a specific pattern to form the material.

In this study, scientists investigated how organic ligands forming the scaffold for growing materials influence the assembly process. A ligand is an ion or molecule that binds to a central metal atom to form a coordination complex.

The scientists self-assembled a number of nanocrystal films using various shapes of ligands and compared their influence on the overall structure of the material. To investigate the resulting structures, they used the Center for Functional Nanomaterials’ transmission electron microscopes (TEMs) and small-angle and wide-angle x-ray scattering at the Complex Materials Scattering (CMS) and Soft Matter Interfaces (SMI) beamlines at the National Synchrotron Light Source II (NSLS-II). CFN and NSLS-II are both U.S. Department of Energy (DOE) Office of Science user facilities located at DOE’s Brookhaven National Laboratory.

The scientists found a lock-and-key type of mechanism connecting the ligand choice and the resulting nanomaterial’s architecture. Using simulations, the team was able to predict the shape of the structures based on experimental design parameters. These findings offer a deeper understanding about the molecular interplay between ligands and nanocrystals, as well as a guide to future design frameworks for specific assemblies of nanocrystals.

Primary support for this study was provided by Office of Naval Research through Multidisciplinary University Research Initiative Award ONR N00014-18-1-2497. K.C.E. acknowledges support from the NSF Graduate Research Fellowship Program under Grant No. DGE-1321851. W.E.Z. was supported by a National Defense Science and Engineering Graduate (NDSEG) Fellowship, 32 CFR 168a, awarded by the Department of Defense, Air Force Office of Scientific Research under Contract No. FA9550-11-C-0028. This work used the Extreme Science and Engineering Discovery Environment (XSEDE), which is supported by National Science Foundation Grant ACI1053575; XSEDE Award DMR 140129. Computational resources and services were also provided by Advanced Research Computing (ARC-TS) at the University of Michigan, Ann Arbor, MI. This research was supported by the National Science Foundation with support from the POLYMERS-DMR1507713 and 1905912 (N.M.K., R.J.C.), PIRE-OISE-1545884 (N.M.K., C.B.M., R.J.C.), and MRSEC-DMR-1720530 (N.M.K., C.B.M., R.J.C.) programs. This research used resources of the Center for Functional Nanomaterials and the National Synchrotron Light Source II, which are U.S. DOE Office of Science Facilities, at Brookhaven National Laboratory under Contract No. DE-SC0012704.