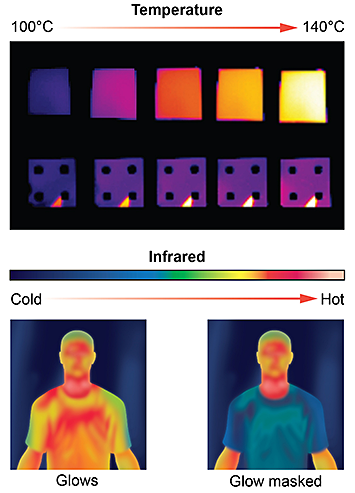 (Top) a comparison between the new material and a normal sample. (Bottom) Illustration of the principle of infrared camouflage.

For the first time, scientists found a material whose quantum nature enables it to mask its heat properties from infrared cameras.

This new result has significant impact on applications such as infrared camouflage, privacy shielding, and other future applications of quantum materials in controlling heat transfer.

Conventional wisdom states that the hotter an object is, the brighter it glows. This is the case for thermal light at any wavelength and enables applications such as infrared imaging and noncontact thermometry.

In this work, scientists demonstrate, for the first time, a coating that emits the same amount of thermal radiation independent of its temperature, within a temperature range of about 30 °C. This is accomplished using samarium nickel oxide (SmNiO3)—a quantum material that changes strongly but gradually as a function of temperature. The scientists attribute this evolution of its optical properties over the temperature range of ∼40 to ∼140 °C to a fully reversible and hysteresis-free thermally driven insulator-to-metal transition (IMT). The thermal IMT in SmNiO3 is due to charge disproportionation in the Ni site and involves subtle changes in the Ni–O–Ni bond angle.

The scientists designed a zero-differential thermal emitter (ZDTE), an ultrathin film based on SmNiO3, and investigated its optical properties thoroughly using various experimental techniques. Among other techniques, they used spatially resolved x-ray absorption spectroscopy in the XPEEM/LEEM endstation at the Electron Spectro-Microscopy (ESM) beamline to map the material’s thermal transition, which showed a smooth variation with temperature. The EMS beamline is part of the material characterization capabilities of the National Synchrotron Light Source II (NSLS-II), a U.S. Department of Energy Office of Science User Facility located at Brookhaven National Laboratory.

The scientists confirmed the presence of a zero-differential region in a model experiment where two samples—their ZDTE and a reference sapphire wafer—were mounted in way that only a corner of each sample was heated. The scientists found that the wafer showed the expected temperature gradient across it surface, while the ZDTE showed nearly the same thermal radiation across the surface.

This is the first time that temperature-independent thermal radiation has been demonstrated, and these findings have substantial implications for infrared camouflage, privacy shielding, and radiative heat transfer.

Feature Story: “Camouflage Made of Quantum Material Could Hide You From Infrared Cameras”

M.A.K. acknowledges financial support from the Office of Naval Research (N00014-16-1-2556) and the National Science Foundation (ECCS-1750341). S.R. acknowledges financial support from the Air Force Office of Scientific Research (FA9550-16-1-0159). P.R. was supported by a Critical Skills Master’s Fellowship from Sandia National Laboratories. Some measurements were performed at the Soft Materials Characterization Laboratory at the University of Wisconsin–Madison. This research used resources of the Center for Functional Nanomaterials and National Synchrotron Light Source II, which are U.S. Department of Energy Office of Science Facilities at Brookhaven National Laboratory under Contract DE-SC0012704.