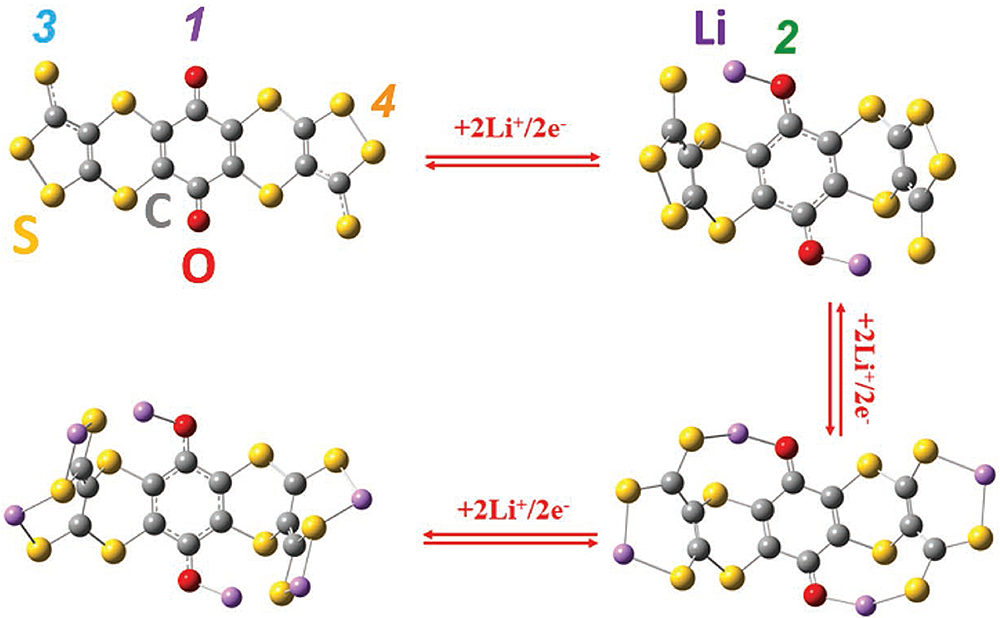 The image shows the structural evolution of the new organic battery electrode during the lithiation process. The measurements and calculations suggest that the process has three stages in which Li2, Li4, and Li6 are formed sequentially (shown clockwise in the figure). Image Credit: Adv. Energy Mater. 1900705 (2019)

Due to an undesirable compound that dissolves in the electrolyte and diffuses throughout the battery, sulfur can cause adverse reactions that degrade battery performance. The scientists addressed this issue by designing a cathode material in which sulfur atoms are attached to an organic backbone.

The study on the new material shows that the carbonyl group—having a double bond between a carbon atom and an oxygen atom—improves the fast charge-discharge capability of the battery and adds extra capacity.

The researchers used soft x-rays at the In situ and Operando Soft X-ray Spectroscopy (IOS) beamline of the National Synchrotron Light Source II (NSLS-II)—a U.S. Department of Energy (DOE) Office of Science User Facility located at DOE’s Brookhaven National Laboratory—to directly probe the oxygen atom in the organic backbone and study its electronic structure before and after the battery charged and discharged.

The results from NSLS-II and additional experiments at the Canadian Light Source enabled the scientists to successfully confirm the battery’s charge-discharge capacity provided by the sulfur atoms. The researchers say this study provides a new strategy for improving the performance of sulfur-based cathodes for high performance Li-ion batteries.

The work at Brookhaven National Laboratory was supported by the Assistant Secretary for Energy Efficiency and Renewable Energy, Vehicle Technology Office of the U.S. Department of Energy through the Advanced Battery Materials Research (BMR) Program, including Battery500 Consortium under contract DESC0012704. This research used resources at beamlines 8-BM (TES), 28-ID-2 (XPD), and 23-ID-2 (IOS) of the National Synchrotron Light Source II, a U.S. Department of Energy (DOE) Office of Science User Facility operated for the DOE Office of Science by Brookhaven National Laboratory under Contract No. DE-SC0012704. This work was supported by the Natural Science Foundation of Jiangxi Province of China (20142BAB212006). Work at the Canadian Light Source was supported by the CFI, the NSERC, the University of Saskatchewan, the Government of Saskatchewan, Western Economic Diversification Canada, the National Research Council Canada, and the Canadian Institutes of Health Research.