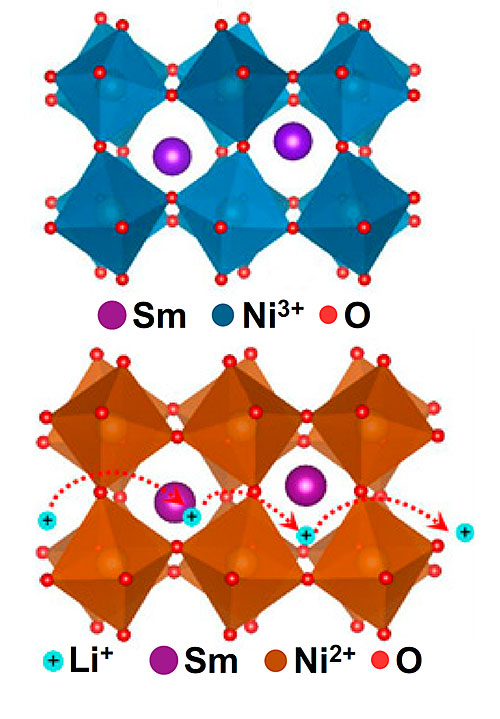 The top image shows the crystal structure of pristine SmNiO3 (SNO), which is a narrow-gapped semiconductor at room temperature. When lithiated (Li-SNO), the material becomes both an insulator and a lithium ion conductor, shown in the bottom image. Image credit: PNAS, 1805029115 (2018)

In many systems, ranging from batteries to brains,  the transport of ions plays a crucial role in transmitting information or signals. Currently, the leading ion-conducting materials are liquid and organic, but the development of solid and inorganic ion conductors could have broad applications in energy conversion, bioengineering, and information processing.

In traditional design approaches for new ion-conductors, scientists primarily try to dope a material, a process by which a different atom is introduced to the material in order to add new ions. However, this approach is limited by the amount, or concentration, of the added atoms to the material, which in turn limits ionic conductivity.

In this study, a team of scientists demonstrated a new class of lithium ion (Li-ion) conducting quantum materials in the perovskite family. These perovskite nickelates can be used as Li-ion shuttles with simultaneous suppression of electronic transport via a Mott transition. Adding lithium to these materials expands the structure in way that enables fast Li-ion conduction with reduced activation energy.

To fully understand the specific behavior of the electrons in the nickel and oxygen atoms inside the material, the researchers used a technique called x-ray absorption spectroscopy at the In situ and Operando Soft X-ray Spectroscopy (IOS) beamline at the National Synchrotron Light Source II (NSLS-II), a U.S. Department of Energy (DOE) Office of Science User Facility at DOE’s Brookhaven National Laboratory. The scientists combined these measurements with additional research methods and techniques to receive more in-depth knowledge about the material and its properties. They further presented a generalization of this approach with results on other rare-earth perovskite nickelates, as well as dopants such as sodium ions (Na+). The results highlight the potential of quantum materials and emergent physics in design of ion conductors.