Using Plants to Immobilize and Stabilize Arsenic in the Soil 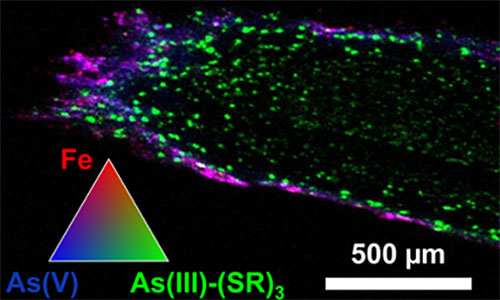 This image shows a microscale x-ray fluorescence imaging of a 30 μm thick P. juliflora root grown at mine tailings. The tricolor plot represents an overlay of iron and two different forms of arsenic, As(V) and As(III)-(SR)3 in a 10:1:1 ratio of intensity scales. Image credit : Environ. Sci. Technol. 52, 1156−1164 (2018).

P. juliflora plant roots were shown to use a combination of two mechanisms to scavenge and immobilize arsenic from mine tailings

Phytostabilization can be a cost-effective and long-term bioremediation technique for the detoxification of arsenic-rich soils.

Arsenic is a metalloid of significant concern in soil because of its proven toxic effects on humans and animals and disruption to plant metabolism. In base-metal mining regions in the southwestern United States, arsenic is naturally abundant in the soil, however, when exposed to oxygen and water by natural weathering, it transforms into a toxic form and becomes a contaminant in the soil. This geochemical transformation is observed at the legacy mine tailings located in the Iron King Mine and Humboldt Smelter Superfund site (IKMHSS, EPA no. AZ0000309013) in central Arizona.

Phytostabilization is a technology that uses living plants to clean up soil and water that are contaminated with various elements such as arsenic. It is a cost-effective long-term bioremediation technique for the immobilization of metalliferous mine tailings. However, the biogeochemical processes a?ecting metal(loid) stabilization and mobility in the root zone remain poorly resolved.

In this study, a team of scientists grew Prosopis juliflora, a small tree native in Central and South America, for up to 36 months in the mine tailings from a federal Superfund site. The scientists then came to the National Synchrotron Light Source II (NSLS-II), a U. S. Department of Energy (DOE) Office of Science User Facility located at DOE’s Brookhaven National Laboratory, to investigate the roots of these plants using multiple x-ray capabilities.

The scientists used the Submicron Resolution X-ray Spectroscopy (SRX) beamline to image and determine the amounts of iron, arsenic, and sulfur speciation, abundance, and spatial distribution within the plant.

Their results revealed two distinct mechanism of arsenic detoxification in the plant root system. One mechanism forms plaque on the surface of the plant’s roots limiting the uptake of toxic elements to the plant part above ground. While in the other mechanism the arsenic that penetrates the roots is reduced and stored in the vacuoles, which are compartments within cells that can isolate materials from the rest of the cell.

Scientists have postulated the existence of the latter mechanism of plants sealing away harmful matter within vacuoles, however this had not been confirmed until this study. These findings also present new applications for x-ray imaging analysis for probing metal(loid) biogeochemistry relating to plant–soil interactions.

This research was supported by NIEHS Superfund Research Program grant no. 2 P42 ES04940. This research used the SRX beamline 5-ID of the National Synchrotron Light Source II, a U.S. Department of Energy (DOE) Office of Science User Facility operated for the DOE Office of Science by Brookhaven National Laboratory under contract no. DE-SC0012704. Portions of this research were carried out at Stanford Synchrotron Radiation Laboratory, a National User Facility operated by Stanford University on behalf of the U.S. Department of Energy, Office of Basic Energy Sciences.