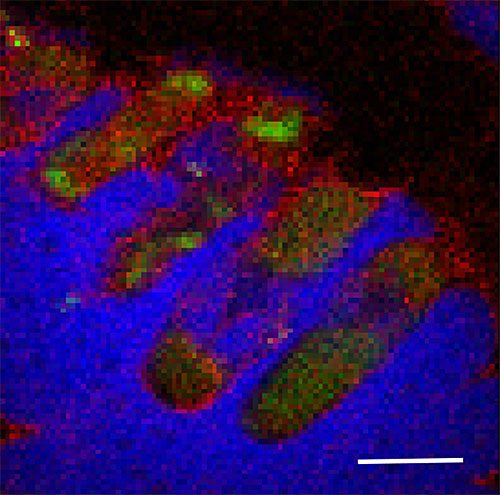 The image shows an x-ray fluorescence map of the elemental distribution in E. coli cells. The shown elements are zinc (green), chlorine (blue), and calcium (red) and the scale bar is 1 μm. Image credit: Sci. Reports. 8: 13415 (2018)

The elemental distribution and nanostructure of single bacteria were co-localized simultaneously using x-ray fluorescence (XRF) nanotomography and ptychography with a sub-15 nm beam.

This multimodal approach presents new possibilities in understanding subcellular biochemistry in individual organelles, which are usually analyzed at the population level.

X-ray Fluorescence (XRF) microscopy is a growing approach for imaging the trace element concentration, distribution, and speciation in biological cells at the nanoscale. Moreover, three-dimensional nanotomography provides the added advantage of imaging subcellular structures and chemical identity in three dimensions without the need for staining or sectioning cells. However, technical challenges in x-ray optics, sample preparation, and detection sensitivity have limited the use of XRF nanotomography in this area.

The scientists simultaneously combined their measurements at the beamline with ptychography to image structural components of the cells. The cells were embedded in small (3-20 µm) sodium chloride crystals, which provided a non-aqueous matrix to retain the three-dimensional structure of the E. coli while collecting data at room temperature.

The results showed a generally uniform distribution of calcium in the cells, but an inhomogeneous zinc distribution, most notably with concentrated regions of zinc at the polar ends of the cells.

This work demonstrates that simultaneous two-dimensional ptychography and XRF nanotomography can be performed with a sub-15 nm beam size on unfrozen biological cells to co-localize elemental distribution and nanostructure simultaneously.

This work was supported by the United States Department of Energy, Office of Biological and Environmental Research, as part of the “Environment Sensing and Response” Scientific Focus Area of the BER Genomic Science Program and the National Institutes of Health T32 Grant 5T32GM092714. This research used resources of beamline 3-ID (HXN) at NSLS-II, a U.S. Department of Energy (DOE) Office of Science User Facilities operated for the DOE Office of Science by Brookhaven National Laboratory under Contract No. DE-SC0012704.