On a Quest to Tailor the Reactivity of Oxide Catalysts

Scientists studied surface behavior during oxidation, which is relevant to many technologies, such as solar cells and microelectronics 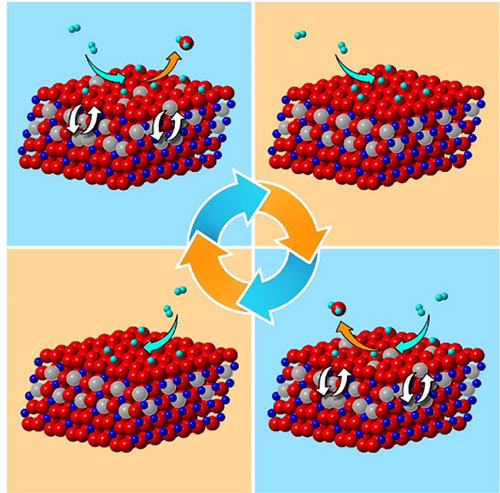 Scientists studied hydrogen oxidation over copper oxide (CuO) surfaces by simultaneously resolving structural changes of the catalyst from the surface and subsurface at the atomic scale in real time.

By differentiating between the surface and subsurface states, these results have a broader applicability that is relevant to a wide range of chemical processes involving surface–subsurface mass transport, such as heterogeneous catalysis, oxidation, corrosion, and carburization.

Much of the technology that we use in our daily lives, such as optical display technology, solar energy devices, catalysts, and microelectronic devices, includes a class of materials called metal oxides to function. Scientists know that many of the physical and chemical functionalities of oxides are often intimately controlled by the interplay between the surface and subsurface of the material. However, detailed insight into the interactions between surface and subsurface for catalysts requires specialized measurement techniques.

In this work, scientists studied the atomic structural changes in both the surface and deeper regions of a sample made of copper oxide (CuO) during a reaction of the surface with hydrogen. Some experiments were carried out at the ambient pressure x-ray photoelectron spectroscopy endstation at the In situ and Operando Soft X-ray Spectroscopy (IOS) beamline at the National Synchrotron Light Source II (NSLS-II) while others were performed at the Center for Functional Nanomaterials (CFN). The IOS endstation was built in partnership between CFN and NSLS-II. Both CFN and NSLS-II are U.S. Department of Energy (DOE) Office of Science User Facilities located at DOE’s Brookhaven National Laboratory.

The researchers found that cyclic oscillations took place in the form of ordering and disordering of oxygen vacancies in the subsurface. They also learned that the structural oscillations in subsurfaces were induced by the cyclic loss of oxygen from the oxide’s surface. The cyclic ordering and disordering of atomic vacancies observed in this study have broader implication in modulating various gas-surface reactions.

Therefore, these results have a broader applicability to a wide range of chemical processes such as heterogeneous catalysis, oxidation, corrosion and carburization.

This work was supported by the U.S. Department of Energy, Office of Basic Energy Sciences, Division of Materials Sciences and Engineering under Award No. DE-SC0001135. This research used resources of the Center for Functional Nanomaterials, the 23-ID-2 (IOS) beamline at the National Synchrotron Light Source II, and the Scientific Data and Computing Center, a component of the Computational Science Initiative, at Brookhaven National Laboratory, which is supported by the US Department of Energy, Office of Basic Energy Sciences, under Contract No. DE-SC0012704. This work also used the computational resources from the Extreme Science and Engineering Discovery Environment (XSEDE) through allocation TG-DMR110009, which is supported by National Science Foundation grant number OCI-1053575.