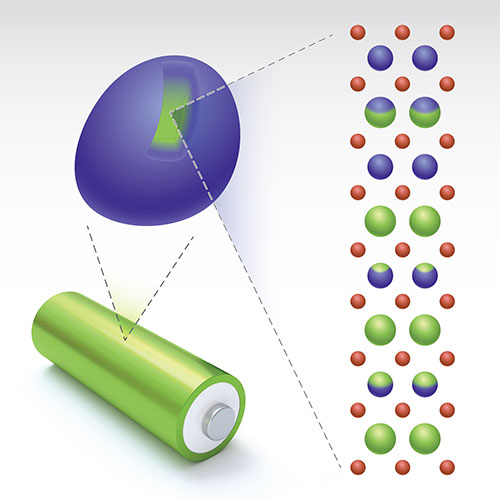 The illustration shows the layered structure with a Li/transition-metal gradient (green) within one single-crystal particle of cathode material. Image credit: Nature Energy 4 1049-1058 (2019).

HACR cathode are promising candidates for next-generation battery applications; this study addresses their oxygen release issue and offers a new path for improving the performance of other cathode materials.

As conventional battery materials reach their limits, scientists search for new cathode materials that reach beyond current limitations. One potential candidate is a hybrid anion- and cation-redox (HACR) cathode, which uses lithium-rich (Li-rich) lithium transition metal oxides (LXMO) for their layered structure. However, due to some critical issues, such as oxygen release and voltage decay during cycling, these cathodes are currently not used in real-world applications.

Currently, a team of scientists have developed a molten salt treatment to address the oxygen release issue, and therefore the voltage decay by creating lithium-gradient particles. A battery cathode has a granular structure that consists of many larger particles made of the same material. In the case of the HACR cathode, the particles are made of LXMO. The scientists figured out that most of the oxygen that is released comes from the surface of these particles, while the oxygen in the center of the particles stays put.

In this case, the gradient from ‘lithium richness’ to ‘lithium poorness’ in the particle achieves the following goals: The Li-rich core that takes up most of the particle volume has very high capacity, and therefore offers stable battery performance, while the Li-poor region near the surface has a structure designed to prevent oxygen release.

After synthesizing their Li-gradient particles, the team used several experimental techniques to measure the structure and properties of the particles. Among these, they used soft x-ray absorption spectroscopy at the In situ and Operando Soft X-ray Spectroscopy (IOS) beamline to investigate the oxidation states of the elements within the particles. IOS is one of the various beamlines available at the National Synchrotron Light Source II (NSLS-II), a U.S. Department of Energy (DOE) Office of Science user facility located at DOE’s Brookhaven National Laboratory. They also used scanning/ transmission electron microscopic capabilities at the Center for Functional Nanomaterials, also a DOE Office of Science user facility at Brookhaven Lab.

The scientists validated the Li-gradient and performance of their cathode design and concluded that their high-temperature immunization treatment could be generalized to leach other elements to avoid unexpected surface reactions in batteries.

We acknowledge the support from NSF ECCS-1610806 and Wuxi Weifu High-Technology Group Co., Ltd. This research used resources of the Center for Functional Nanomaterials and the 23-ID-2 (IOS) beamline of the National Synchrotron Light Source II, both of which are US Department of Energy Office of Science user facilities at Brookhaven National Laboratory, under contract DE-SC0012704. Also, this work was performed in part at the Center for Nanoscale Systems, a member of the National Nanotechnology Coordinated Infrastructure Network supported by the National Science Foundation under NSF award no. 1541959.