Two Catalysts Are Better Than One 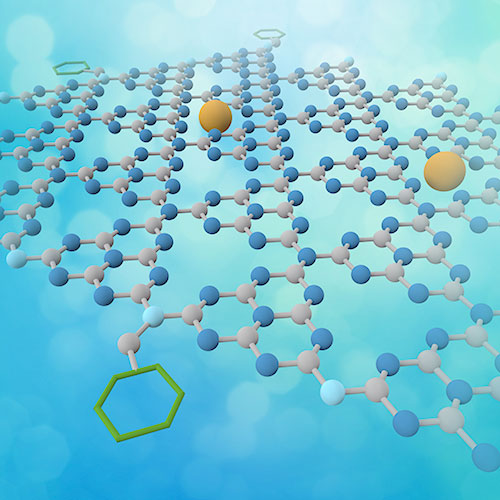 The image shows a 2D nanosheet with the following two co-catalysts in their respective places: a single-atom Co catalyst (yellow) sitting in the voids, and anthraquinone (green) attached to the edges of the sheet.Image credit: PNAS 117 (12) 6376-6382 (2020)

Scientists designed and demonstrated the efficiency a new catalytic material made of two spatially separated co-catalysts on a nanosheet for hydrogen peroxide synthesis.

Using hydrogen peroxide for water purification is more environmentally friendly than many alternatives; however, the efficiency of the reaction is low. This new material provides a novel pathway to higher efficiency in future applications.

A team of scientists collaborated to design and test a new, two-dimensional (2D), catalytic material that can be used to improve water purification using hydrogen peroxide. While water treatment with hydrogen peroxide is environmentally friendly, the two-part chemical process that drives it is not very efficient. So far, scientists have struggled to improve the efficiency of the process through catalysis because each part of the reaction needs its own catalyst—called a co-catalyst—and the co-catalysts can’t be next to each other.

The trick of the newly designed catalytic material and its efficiency is that the scientists managed to place two co-catalysts – one for each part of the reaction – onto to different locations on a thin nanosheet. The beauty is in its simplicity; one of the co-catalysts, a single cobalt (Co) atom, sits in the center of the sheet, whereas the other one, a molecule called anthraquinone, is placed around the edges. This would not be possible with catalysts made of nanomaterials, since they would be ‘too big’ for this purpose.

After the scientists synthesized the new two-in-one catalytic material, they needed to figure out if the co-catalysts would stay separated during an actual reaction and how well this new 2D catalyst would perform. The scientists started their investigation at the hard x-ray Inner Shell Spectroscopy (ISS) beamline at the National Synchrotron Light Source II (NSLS-II) using a technique called x-ray absorption spectroscopy. NSLS-II is a Department of Energy (DOE) Office of Science User Facility located at DOE’s Brookhaven National Laboratory. This technique helped the team to learn more about the local structure of the new 2D catalyst. Specifically, they found out how many neighboring atoms each co-catalyst has, how far away these neighbors are, and how they are connected to each other. The next stop in the investigation was NSLS-II’s Tender Energy X-ray Absorption Spectroscopy (TES) beamline.

Based on their experimental findings, the team used density functional theory to understand the structures and the mechanisms that control the efficiency of the reaction. They were able to validate their findings and the reaction mechanism. Only by combining their expertise in synthesis, analytical experimentation, and theoretical simulation could the team create their new 2D catalyst and demonstrate its efficiency.

Feature Story: “Two is Better Than One”