Scientists open a pathway for developing new and inexpensive catalysts 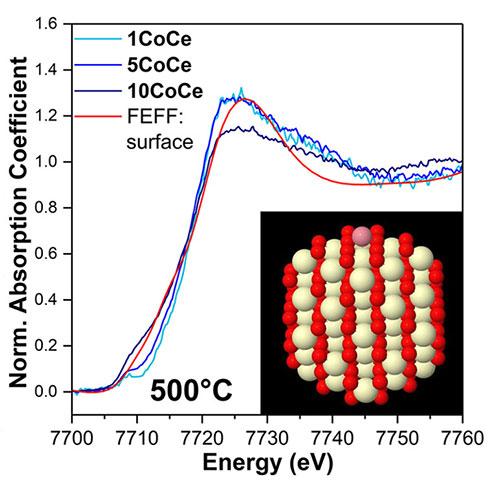 Scientists characterized mesoporous cobalt/ceria (Co/CeO2) catalysts and found the catalysts to be active for water-gas shift reactions at 300 – 500 °C.

The strong interactions seen between mesoporous ceria (CeO2) and cobalt (Co) may aid in the development of new and inexpensive catalysts through multimodal materials design.

Production of pure hydrogen gas for renewable fuel and chemical synthesis applications remains an area of significant research interest. Currently, over 95% of the world’s hydrogen supply is produced through the reforming of fossil fuels. This reforming process generates a product stream with a significant concentration of carbon monoxide (CO). The CO content is highly detrimental to the application of hydrogen toward synthesis processes and hydrogen fuel cells, since CO acts as a catalyst poisoning agent. For this reason, the removal of CO from reformate gas feeds is a necessary part of the hydrogen generation process.

The water-gas shift reaction is widely applied to industrial hydrogen generation processes to remove CO from reformate gas and generate additional hydrogen product. This reaction is typically carried out with the help of heterogeneous catalyst materials in two temperature stages to take advantage of both the kinetic and thermodynamic properties of the mildly exothermic reaction.

In this study, scientists examined mesoporous Co/CeO2 materials as a potential catalyst to foster the water-gas shift reaction. The researchers demonstrated that their catalysts showed significant catalytic activity for the high temperature region of the water-gas shift reaction. Their catalysts are small clusters, or atoms of cobalt, which are embedded into the mesoporous ceria preventing the typical chemistry seen for bulk Co.

The scientists found that the strong interactions seen between mesoporous ceria and cobalt may aid in the development of new and inexpensive catalysts through evidence-based materials design and synthesis. The reaction environment characterization of these low cobalt loading catalysts is a part of an ongoing effort to foster an understanding of the structural, chemical, and mechanistic properties of catalytic materials for industrially important reactions like the water-gas shift.