Mapping the Electronic States in an Exotic Superconductor

Scientists characterized how these states depend on local chemical composition, narrowing the search for where to look compositionally to enable quantum computing 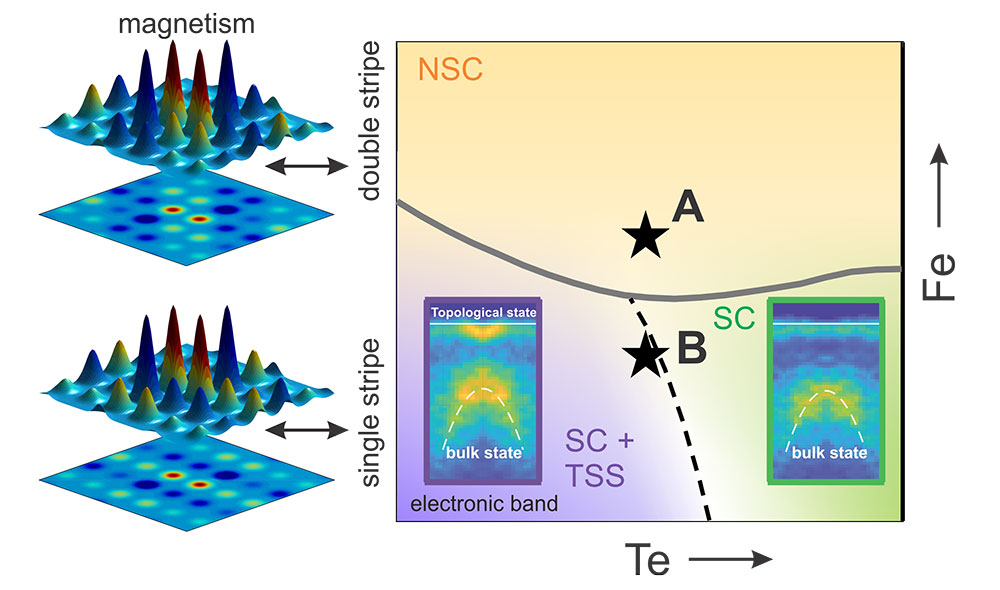 UPTON, NY—Scientists characterized how the electronic states in a compound containing iron, tellurium, and selenium depend on local chemical concentrations. They discovered that superconductivity (conducting electricity without resistance), along with distinct magnetic correlations, appears when the local concentration of iron is sufficiently low; a coexisting electronic state existing only at the surface (topological surface state) arises when the concentration of tellurium is sufficiently high. Reported in Nature Materials, their findings point to the composition range necessary for topological superconductivity. Topological superconductivity could enable more robust quantum computing, which promises to deliver exponential increases in processing power.

“Quantum computing is still in its infancy, and one of the key challenges is reducing the error rate of the computations,” said first author Yangmu Li, a postdoc in the Neutron Scattering Group of the Condensed Matter Physics and Materials Science (CMPMS) Division at the U.S. Department of Energy’s (DOE) Brookhaven National Laboratory. “Errors arise as qubits, or quantum information bits, interact with their environment. However, unlike trapped ions or solid-state qubits such as point defects in diamond, topological superconducting qubits are intrinsically protected from part of the noise. Therefore, they could support computation less prone to errors. The question is, where can we find topological superconductivity? 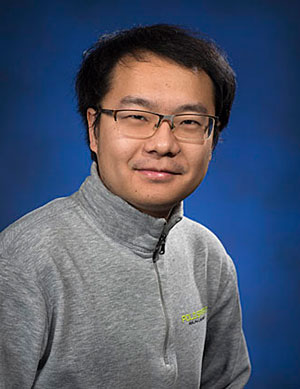 In this study, the scientists narrowed the search in one compound known to host topological surface states and part of the family of iron-based superconductors. In this compound, topological and superconducting states are not distributed uniformly across the surface. Understanding what’s behind these variations in electronic states and how to control them is key to enabling practical applications like topologically protected quantum computing.

From previous research, the team knew modifying the amount of iron could switch the material from a superconducting to nonsuperconducting state. For this study, physicist Gendu Gu of the CMPMS Division grew two types of large single crystals, one with slightly more iron relative to the other. The sample with the higher iron content is nonsuperconducting; the other sample is superconducting.

To understand whether the arrangement of electrons in the bulk of the material varied between the superconducting and nonsuperconducting samples, the team turned to spin-polarized neutron scattering. The Spallation Neutron Source (SNS), located at DOE’s Oak Ridge National Laboratory, is home to a one-of-a-kind instrument for performing this technique.

“Neutron scattering can tell us the magnetic moments, or spins, of electrons and the atomic structure of a material,” explained corresponding author, Igor Zaliznyak, a physicist in the CMPMS Division Neutron Scattering Group who led the Brookhaven team that helped design and install the instrument with collaborators at Oak Ridge. “In order to single out the magnetic properties of electrons, we polarize the neutrons using a mirror that reflects only one specific spin direction.”

To their surprise, the scientists observed drastically different patterns of electron magnetic moments in the two samples. Therefore, the slight alteration in the amount of iron caused a change in electronic state. 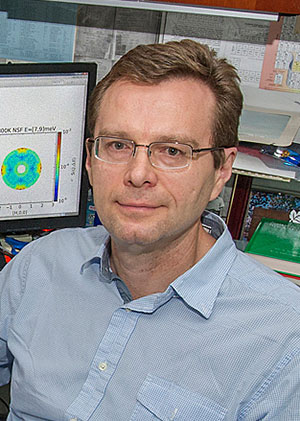 “After seeing this dramatic change, we figured we should look at the distribution of electronic states as a function of local chemical composition,” said Zaliznyak.

At Brookhaven’s Center for Functional Nanomaterials (CFN), Li, with support from CFN staff members Fernando Camino and Gwen Wright, determined the chemical composition across representative smaller pieces of both sample types through energy-dispersive x-ray spectroscopy. In this technique, a sample is bombarded with electrons, and the emitted x-rays characteristic of different elements are detected. They also measured the local electrical resistance—which indicates how coherently electrons can transport charge—with microscale electrical probes. For each crystal, Li defined a small square grid (100 by 100 microns). In total, the team mapped the local composition and resistance at more than 2,000 different locations.

“Through the experiments at the CFN, we characterized the chemistry and overall conduction properties of the electrons,” said Zaliznyak. “But we also need to characterize the microscopic electronic properties, or how electrons propagate in the material, whether in the bulk or on the surface. Superconductivity induced in electrons propagating on the surface can host topological objects called Majorana modes, which are in theory one of the best ways to perform quantum computations. Information on bulk and surface electronic properties can be obtained through photoemission spectroscopy.”

For the photoemission spectroscopy experiments, Zaliznyak and Li reached out to Peter Johnson, leader of the CMPMS Division Electron Spectroscopy Group, and Nader Zaki, a scientific associate in Johnson’s group. By measuring the energy and momentum of electrons ejected from the samples (using the same spatial grid) in response to light, they quantified the strengths of the electronic states propagating on the surface, in the bulk, and forming the superconducting state. They quantitatively fit the photoemission spectra to a model that characterizes the strengths of these states.

Then, the team mapped the electronic state strengths as a function of local composition, essentially building a phase diagram.

“When the material is close to the transition between the topological and nontopological state, you can expect fluctuations,” added Zaliznyak. “For topology to arise, the electronic states need to be well-developed and coherent. So, from a technological perspective, we need to synthesize materials away from the transition line.”

Next, the scientists will expand the phase diagram to explore the compositional range in the topological direction, focusing on samples with less selenium and more tellurium. They are also considering applying neutron scattering to understand an unexpected energy gap (an energy range where no electrons are allowed) opening in the topological surface state of the same compound. Johnson’s group recently discovered this gap and hypothesized it was caused by surface magnetism.