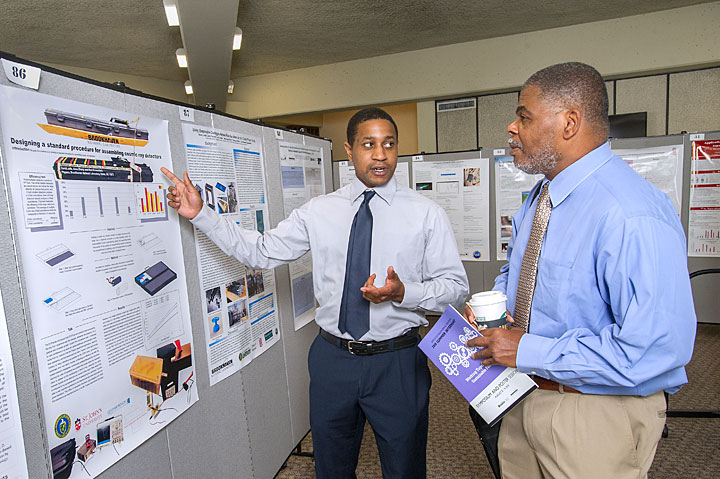 On their final day at Brookhaven, the summer interns had the opportunity to discuss their research with peers, scientists, and visitors during a poster session held in Berkner Hall.

On August 9, 2018, the U.S. Department of Energy’s (DOE) Brookhaven National Laboratory bid farewell—for now—to approximately 250 students at the concluding ceremony to their 10 weeks of summer research. The daylong celebration honored the students’ efforts and accomplishments—and gave them the opportunity to showcase their work to their mentors, fellow interns, university administrators and faculty, and Brookhaven Lab staff.

Each year, hundreds of pre-college and college students from across the country come to Brookhaven to perform cutting-edge research alongside world-renowned scientists through programs run by the Lab’s Office of Educational Programs (OEP). Many of the students’ research projects involve experiments at the Lab’s DOE Office of Science User Facilities—the Relativistic Heavy Ion Collider (RHIC), the National Synchrotron Light Source II (NSLS-II), the Center for Functional Nanomaterials (CFN), and the Accelerator Test Facility (ATF).

Forty selected students gave oral presentations about their research, amazing their peers, mentors, and scientists from across Lab with the understanding and insight they gained while working on their projects. Presentation topics ranged from studies on developing more efficient lithium-ion batteries to designing nanomaterial-based solar cells and research on quantum computers.

Following the presentations, students and employees from all areas of the Lab filled the lobby of Berkner Hall for a massive poster session. Hundreds of interns eagerly discussed their work with peers, scientists, and visitors.

“This was a life-changing first internship, and to complete it at a national lab was pretty amazing,” said intern Chelsea Brown, who spent her summer studying plant and pollinator diversity inside and around the Long Island Solar Farm located on site. She hopes that her research might influence a decision to establish the solar farm as a pollinator habitat. Intern Catherine Trewhella echoed Brown’s sentiment. “This internship has been a really fun learning experience,” she said, holding a 2.5 billion-year-old rock that she analyzed at NSLS-II. Trewhella and her team used x-ray fluorescence imaging to study the mineral content of Earth’s oldest rocks—similar to those found on Mars—and proved that scientists could someday perform the same imaging techniques with encased Martian rocks. “I learned about these rocks during my freshman year of college, and here I am now, holding one.”

Following the poster session, interns Chase Deluca and Tunisia Solomon kicked off the closing ceremony in Berkner Auditorium, reading anonymous quotes from their fellow interns and discussing their own internship experiences.

“Being a part of this brilliant summer 2018 intern group was a life-changing, invaluable learning opportunity,” said Solomon, who investigated the products of nuclear fission reactions in an effort to contribute to scientists’ understanding of energy contained within the atom’s nucleus using data stored at Brookhaven’s National Nuclear Data Center. “I’m so grateful to have spent my summer here.”

Gratitude was a common theme throughout the ceremony. Brookhaven Lab Director Doon Gibbs thanked the students for their dedication and discussed the mutually beneficial relationship between interns and the Lab.

“It has been a great pleasure having you here, and a big success,” Gibbs said. “The questions you ask, the energy you show, the assumptions you challenge, and the ideas you present are game changing for us.”

“There’s a lot of work out there that needs to be done,” said Mtingwa, who gave the students three pieces of advice: better yourself, promote the careers of other colleagues, and make an impact on society. “That work is waiting on you, but take your time. Get your education in, study, work hard—the world can wait.”

The day concluded with a performance by intern Hyidea Burgess, who sang ‘God Bless America’ in honor of its 100th anniversary. Composer Irving Berlin wrote the tune when he was stationed at the U.S. Army’s Camp Upton—now the site of Brookhaven Lab. The crowd erupted in cheers and applause to end the ceremony.

“Your work here contributes to making the world a better place,” said Gibbs. “I’m encouraging you to follow your interests in science and technology. As you do that, think about returning to Brookhaven Lab—we would love to have you back.”

The summer internships offered by the Office of Educational Programs are primarily funded by DOE’s Office of Science, in addition to other DOE offices, Brookhaven Science Associates, the National Science Foundation, and other federal and non-federal agencies.