Brookhaven Lab Celebrates the Bright Future of its 2019 Interns

Brookhaven interns discussed their summer research projects with their peers and Lab staff during a poster session that preceded the closing ceremony.

On August 8, 2019, more than 300 students studying science, technology, engineering, and mathematics (STEM) fields completed summer internships at the U.S. Department of Energy’s (DOE) Brookhaven National Laboratory, making history as one of the largest groups of summer interns the Lab has ever hosted. A daylong closing ceremony, featuring student presentations and inspiring remarks from Brookhaven, DOE, and academic leaders, celebrated their achievements.

Every summer, Brookhaven’s Office of Educational Programs (OEP) offers hundreds of college and pre-college students and teachers the opportunity to conduct cutting-edge research alongside Brookhaven scientists who are experts in their fields. The summer session is just one part of OEP’s year-long effort to connect students the Lab’s cutting-edge research; OEP brings approximately 35,000 students and educators to the Lab each year.

Many of the summer students get the opportunity to conduct experiments at Brookhaven’s DOE Office of Science User Facilities, such as the Center for Functional Nanomaterials (CFN), one of DOE’s five Nanoscale Science Research Centers, and the National Synchrotron Light Source II (NSLS-II), one of the most advanced synchrotron light sources in the world. This summer, intern Steven Snell helped reprogram the cooling system at the Alternating Gradient Synchrotron that supports experiments at the Relativistic Heavy Ion Collider (RHIC), the only operating particle collider in the U.S. and another DOE Office of Science User Facility. Chemistry interns Stephanie Taboada and Nylette Lopez investigated catalysts for converting carbon dioxide into raw materials for fuel or other useful chemicals.

After spending 10 weeks conducting research with their mentors, Brookhaven’s interns began their final day at the Lab by listening to oral presentations by their peers. Students from each scientific department at Brookhaven were chosen to give these presentations not only to fellow interns, but to the Lab’s scientists in their field of study. Topics ranged from studies on additive manufacturing to organic batteries.

Following the oral presentations, all the Brookhaven interns gathered for a grand poster session. The event was bustling as the students discussed their summer research projects with employees from all areas of the Laboratory. The poster session offered the interns a chance to communicate complex science in a professional setting to both scientists and nonscientists—an important skill for a career in research. It was evident from their discussions that, in only a few months, the students had become experts in their fields of study, and they are well on their way to becoming the next generation of leaders in STEM. 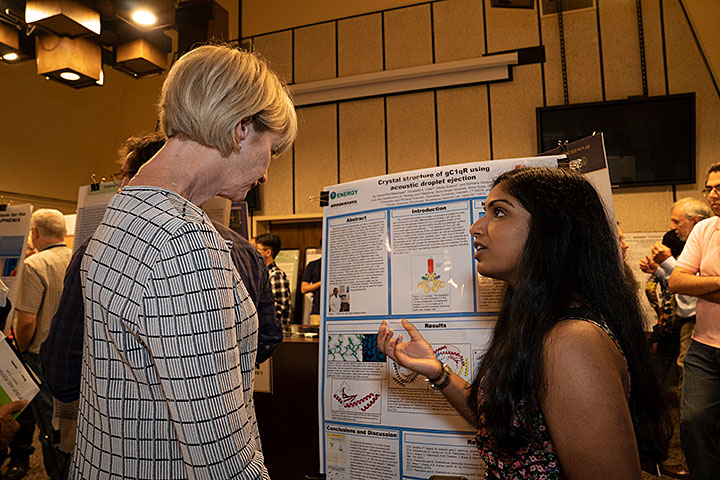 Keynote speaker Kristina M. Johnson, Chancellor of the State University of New York (SUNY) system, (left) attended the poster session and talked with many of the students one-on-one.

Leadership and problem-solving skills were the overarching themes of the closing ceremony, which featured keynote speaker Kristina M. Johnson, Chancellor of the State University of New York (SUNY) system and a former Under Secretary of Energy at DOE. Throughout her talk, Johnson discussed some of the problems she faced as a scientist and how she solved them, highlighting the skills a leader in STEM needs and how the interns developed these skills at Brookhaven.

“Dwight D. Eisenhower said there’s only two things you need to do any tough job, and that’s confidence and enthusiasm. The 10 weeks you spent here built your confidence. How many of you will ever walk into a lab again and feel intimidated? And the enthusiasm is your joy for discovery,” she said.

Johnson then reflected on the 50th anniversary of the moon landing and the teamwork that achievement required. “The problems that are facing society today are just as complex, if not more so, and they require the same kind of teams. Now, you’ve learned how to work with each other and work across disciplines. The kinds of things you’ve learned how to do will make future advances possible.” 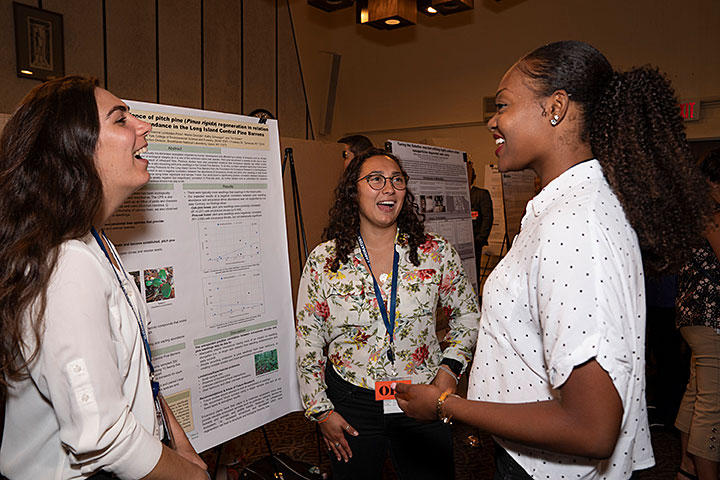 Brookhaven interns discussed their summer research projects with their peers and Lab staff during a poster session that preceded the closing ceremony.

“Congratulations not just on doing the program but for doing amazing work while you were here,” Gibbs said. “While you get a lot out of this program, we get a lot out of it too. It’s because you ask good questions that make us rethink our assumptions, and that’s one of the ways progress is made in science.” Gibbs then invited any intern to email him personally with any questions they may have as they pursue careers in science. “We’re serious about you succeeding,” he said. 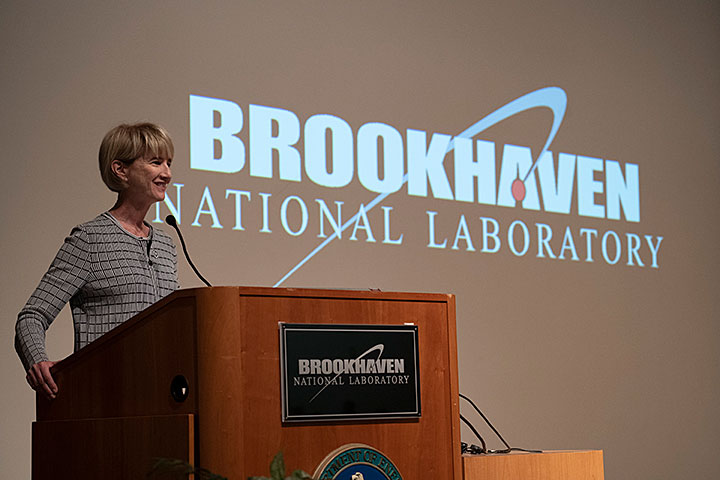 The 2019 summer intern closing ceremony at Brookhaven Lab featured keynote speaker Kristina M. Johnson, Chancellor of the State University of New York (SUNY) system and a former Under Secretary of Energy at the U.S. Department of Energy.

Gordon excited the crowd. “Who here all enjoyed themselves,” he asked, with loud cheers following. “Who here did some really incredible science and activities?” Louder cheers erupted. “Then our job is done. And we really look forward to seeing you again.”

Throughout the ceremony, the speakers reinforced the Lab’s goal to see the interns at a national lab again, preferably Brookhaven—perhaps for a second internship but hopefully as a scientist in the future.

“As we say goodbye to you today, we’re excited to welcome you to the DOE family,” said Ken White, manager of OEP.

The summer internships offered by the Office of Educational Programs are primarily funded by DOE’s Office of Science, other DOE offices, Brookhaven Science Associates, the National Science Foundation, and other federal and non-federal agencies.