Using shape-programmable DNA frames, scientists established a new nanofabrication platform for directing nanomaterial components of different natures (inorganic and biological) into 3-D arrays with prescribed organizations; they then demonstrated the enhanced optical and catalytic functionalities possible with this platform 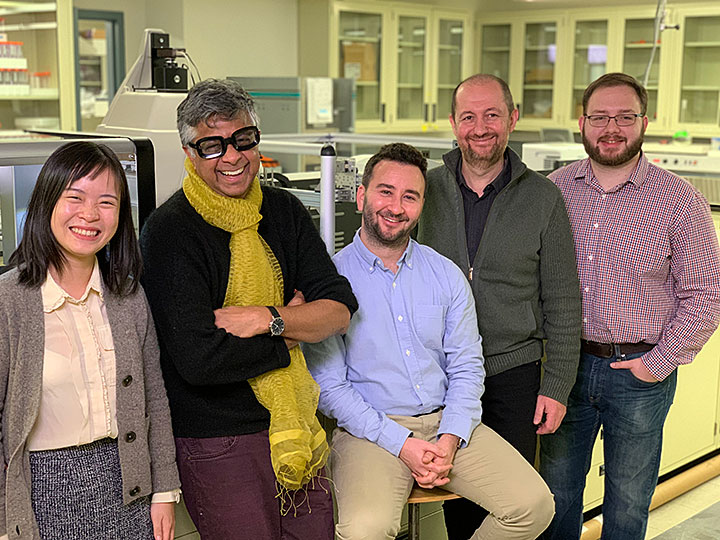 UPTON, NY—Scientists have developed a platform for assembling nanosized material components, or “nano-objects,” of very different types—inorganic or organic—into desired 3-D structures. Though self-assembly (SA) has successfully been used to organize nanomaterials of several kinds, the process has been extremely system-specific, generating different structures based on the intrinsic properties of the materials. As reported in a paper published today in Nature Materials, their new DNA-programmable nanofabrication platform can be applied to organize a variety of 3-D materials in the same prescribed ways at the nanoscale (billionths of a meter), where unique optical, chemical, and other properties emerge. 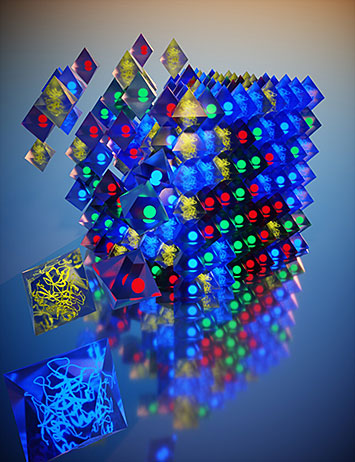 A schematic of the programmable assembly of 3-D ordered nanostructures from material voxels that can carry inorganic or organic nanoparticles with different functions, such as light emitters and absorbers, proteins, and enzymes with chemical activity. Material voxels are fabricated from DNA and nano-objects of different kinds, and their assembly is guided by the voxel design and DNA-programmable interactions.

“One of the major reasons why SA is not a technique of choice for practical applications is that the same SA process cannot be applied across a broad range of materials to create identical 3-D ordered arrays from different nanocomponents,” explained corresponding author Oleg Gang, leader of the Soft and Bio Nanomaterials Group at the Center for Functional Nanomaterials (CFN)—a U.S. Department of Energy (DOE) Office of Science User Facility at Brookhaven National Laboratory—and a professor of Chemical Engineering and of Applied Physics and Materials Science at Columbia Engineering. “Here, we decoupled the SA process from material properties by designing rigid polyhedral DNA frames that can encapsulate various inorganic or organic nano-objects, including metals, semiconductors, and even proteins and enzymes.”

The scientists engineered synthetic DNA frames in the shape of a cube, octahedron, and tetrahedron. Inside the frames are DNA “arms” that only nano-objects with the complementary DNA sequence can bind to. These material voxels—the integration of the DNA frame and nano-object—are the building blocks from which macroscale 3-D structures can be made. The frames connect to each other regardless of what kind of nano-object is inside (or not) according to the complementary sequences they are encoded with at their vertices. Depending on their shape, frames have a different number of vertices and thus form entirely different structures. Any nano-objects hosted inside the frames take on that specific frame structure.

Schematic of the platform for assembling 3-D lattices from inorganic and organic nano-objects with DNA frames shaped as a tetrahedron (top row), octahedron (middle row), and cube (bottom row). The frame valence is determined by the vertices and corresponds to the number of connections (bonds) and how these connections are organized relative to one another. For example, the tetrahedral frame has a valence of four. The resulting 3-D lattices are based on the shape of the DNA frame—tetrahedral frames assemble into diamond structures, octahedral into simple cubic, and cubic into body-centered cubic—regardless of which nano-object (if any) is inside the frame.

To demonstrate their assembly approach, the scientists selected metallic (gold) and semiconducting (cadmium selenide) nanoparticles and a bacterial protein (streptavidin) as the inorganic and organic nano-objects to be placed inside the DNA frames. First, they confirmed the integrity of the DNA frames and formation of material voxels by imaging with electron microscopes at the CFN Electron Microscopy Facility and the Van Andel Institute, which has a suite of instruments that operate at cryogenic temperatures for biological samples. They then probed the 3-D lattice structures at the Coherent Hard X-ray Scattering and Complex Materials Scattering beamlines of the National Synchrotron Light Source II (NSLS-II)—another DOE Office of Science User Facility at Brookhaven Lab. Columbia Engineering Bykhovsky Professor of Chemical Engineering Sanat Kumar and his group performed computational modeling revealing that the experimentally observed lattice structures (based on the x-ray scattering patterns) were the most thermodynamically stable ones that the material voxels could form.

“These material voxels allow us to begin to use ideas derived from atoms (and molecules) and the crystals that they form, and port this vast knowledge and database to systems of interest at the nanoscale,” explained Kumar.

Gang’s students at Columbia then demonstrated how the assembly platform could be used to drive the organization of two different kinds of materials with chemical and optical functions. In one case, they co-assembled two enzymes, creating 3-D arrays with a high packing density. Though the enzymes remained chemically unchanged, they showed about a fourfold increase in enzymatic activity. These “nanoreactors” could be used to manipulate cascade reactions and enable the fabrication of chemically active materials. For the optical material demonstration, they mixed two different colors of quantum dots—tiny nanocrystals that are being used to make television displays with high color saturation and brightness. Images captured with a fluorescence microscope showed that the formed lattice maintained color purity below the diffraction limit (wavelength) of light; this property could allow for significant resolution improvement in various display and optical communication technologies.

“We need to rethink how materials can be formed and how they function,” said Gang. “Material redesign may not be necessary; simply packaging existing materials in new ways could enhance their properties. Potentially, our platform could be an enabling technology ‘beyond 3-D printing manufacturing’ to control materials at much smaller scales and with greater material variety and designed compositions. Using the same approach to form 3-D lattices from desired nano-objects of different material classes, integrating those that would otherwise be considered incompatible, could revolutionize nanomanufacturing.”